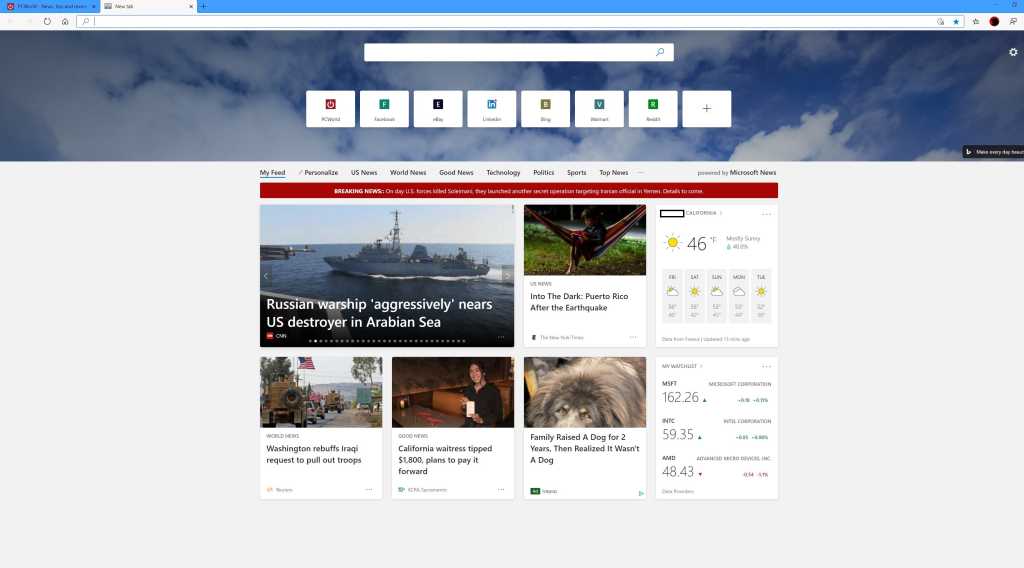 Beginning Wednesday, the era of the “traditional” Microsoft Edge will come to an end—for consumers, anyway.

Microsoft said in November that the new Chromium-based Edge would begin replacing the “traditional” Edge, which uses Microsoft’s own EdgeHTML to render pages.  Yusuf Mehdi, corporate vice president in charge of Microsoft’s Modern Life & Devices Group, told PCWorld that the process would begin on January 15. Microsoft confirmed this in a document it released earlier this week, though with one caveat: If you’re a business user, you can choose to remain on the “old” Edge.

According to Microsoft, Windows 10 Home and Pro PCs that are running Windows 10 1803 (the April 2018 Update) will be automatically updated to the new Chromium-based Edge, colloquially known as “Chredge” or “Edgium.” If your PC is joined to an Active Directory or Azure Active Directory domain, or managed by an external admin—business users, essentially—then it will be excluded from the upgrade. Microsoft will also deploy what it’s calling the Blocker Toolkit to help prevent automatic delivery of the new Edge.

Consumers, however, won’t have a choice. And to many, they’ll simply see the old Edge replaced with the new Edge, complete with an updated logo. Naturally, this won’t make much of a difference if you already browse with Chrome or Firefox as your default browser. If you do use Edge, however, you’ll begin seeing the new Edge with its new UI. Microsoft’s made an effort to keep the new Edge’s memory consumption down.

Microsoft’s going right down to the wire in finalizing the new Edge, too. According to the latest beta build of the new Edge (Edge version 79.0.309.60), certain sync features haven’t yet been turned on, including open tabs and history. Insider versions of the new Edge also won’t sync with the old Edge, at least right now. (That may be fixed by release.)

So what can you do if you still want to hold on to the old Microsoft Edge, at least for now? It’s unclear, but more information may arrive next week: “This process will start after January 15, 2020 and more information will be available on that date,” Microsoft says of the Edge transitional period. So for now, stay tuned.