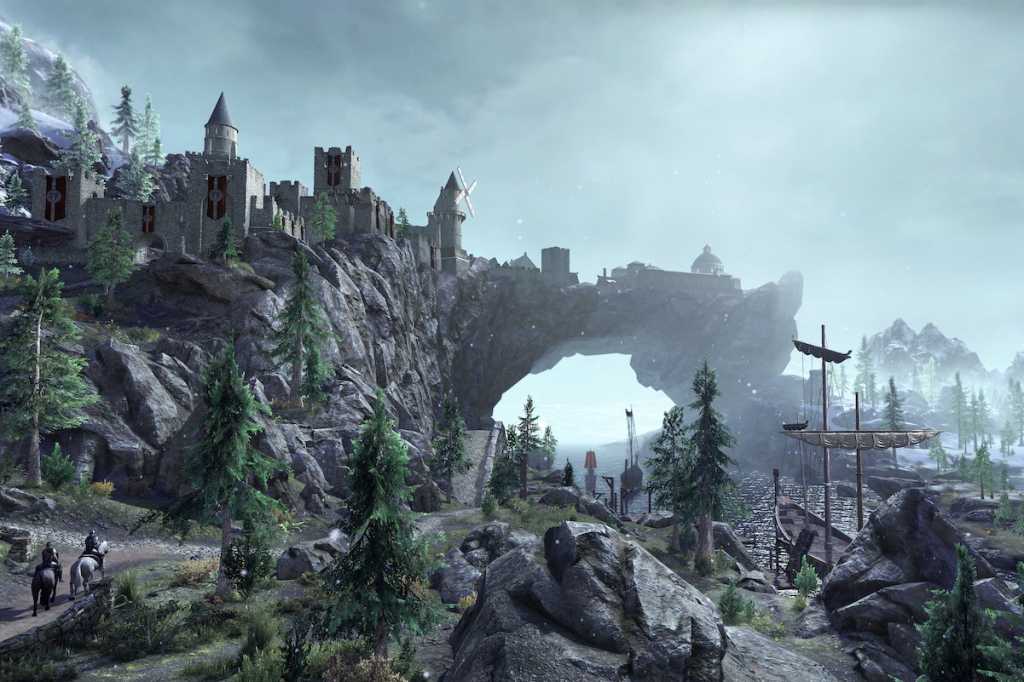 I had a feeling it wouldn’t be too long before The Elder Scrolls Online played its Skyrim card, particularly since the last two expansions were set in places we never saw in the most popular mainline Elder Scrolls games. And sure enough, yesterday developer ZeniMax Online revealed a trailer and some facts about ESO’s upcoming Greymoor expansion, which takes place in the upper northwest corner of the Viking-themed realm.

It looks like a fun romp, especially if you’re into vampires, werewolves, and other assorted favorite Halloween costumes. It also looks and sounds a little too familiar for anyone who’s played the game in the last couple of years, and that’s not just because of the setting. Considering that we’re rapidly approaching the 10th anniversary of The Elder Scrolls V: Skyrim – one of the most popular RPGs of all time – I would’ve expected something a little more ambitious.

Oh, I’m sure I’ll enjoy it. The trailer alone has me hyped. Right out of the gate, it jolts us with nostalgia with a shot of the precariously perched city of Solitude. It leads us down snowy forest paths with beefy axe-wielding warriors, and it stokes memories of Skyrim’s popular 2012 Dawnguard expansion with shots of vampires being utterly terrible neighbors. Then it takes us underground to Blackreach, a forbidding underground realm that’ll end up accounting for almost half of Greymoor’s playable area (and takes more room than it did in Skyrim). I don’t even care for vampires that much, and that trailer was good enough to leave me whispering, “Hell, yeah.” This will definitely be a proper Skyrim story.

But one of the popular criticisms of flashy trailers like this is that they don’t reveal a great deal about the gameplay, and that’s probably a good thing since Greymoor doesn’t offer many features that aren’t already in the game. So what is new?

For one, there’s northwest Skyrim itself. As in ESO’s popular 2017 Morrowind chapter, though, the emphasis is on luring in new and returning players to revisit places they’ve already seen in other games rather than introducing other areas of Tamriel in the manner of Summerset and Elsweyr. We won’t be getting new combat classes this time around, but the at least Vampire skill line will finally be (cough) revamped.

In fact, the biggest change is the introduction of the “Antiquities” system, which sends you all over the world to find artifacts and learn associated lore. In at least one case, you can cobble together some of the junk you find and make a cool mount out of it. It sounds a heck of a lot like World of Warcraft’s Archaeology profession, which once lead me to spend an ungodly chunk of my life digging holes in Pandaria so I could get a nifty title I now barely even use. I probably could’ve developed light conversational skills in a new language with that time. I’ve gotten some fun gear and mounts out of it, but on the whole it’s one of the most mind-numbing activities I’ve ever done in an MMORPG, and that’s saying a lot. I’ll reserve some hope that ZeniMax can do it better, but not much.

And that’s about it, really, for the new stuff aside from some performance and quality of life improvements.

Beyond that, Greymoor is still good ol’ ESO. You have the expected 30 or so hours it takes to finish the chapter’s main quest, the usual smattering of public dungeons and delves, and there’s a new 12-person trial called Kyne’s Aegis. Even vampires and werewolves have always been in the game. You’ll also find a the new “Harrowmeres,” but these are basically just ESO’s usual dynamic events in a new guise, which were previously depicted as Dark Anchors, Abyssal Anchors, or, well, dragons.

At any other time, this wouldn’t be such a bad thing. ESO has perfected a template that works, and that template helped it rebound from a disappointing 2014 launch and become the best MMORPG rebound story outside of Final Fantasy XIV.

But there’s also no question that it’s getting old—or at least overly familiar. It’s a shame ZeniMax Online didn’t pair the return of Skyrim with something more exciting, such as a new combat class, a new profession, or even just an overhaul to the Champion Point system for players who have reached the level cap. Pitifully enough, the aspect of the expansion that has me most excited after the trailer is the return of the physical collector’s edition, which took a hiatus for Elsweyr. (That’s a shame, as I would have loved few things more than to had an adorable statuette of that expansion’s housecat-like Alfiq.)

Why not do more? The Skyrim name should be a bigger lure than Morrowind. Skyrim is one of the best selling video games in history, and it’s infamously been ported to everything from the Nintendo Switch to Alexa and Samsung refrigerators. (The Macworlder in me is obliged to point out that it still hasn’t made its way to the brushed aluminum horizons of the Mac.) All of which is to say that Greymoor would have been fertile ground for a bold update, one that could have won back players with something besides memories of that time they chased a few digital vampires over the snow almost a decade ago.

Maybe that’s not out of the question yet. Greymoor only unlocks a section of Skyrim, so nostalgia-rich spots like the towns of Whiterun and Markarth may be the showcase for new features in future DLC or a chapter. Eastern Skyrim was available when ESO launched. ZeniMax apparently learned a lesson from Morrowind, where it blew all of its future nostalgia-drawing power in one shot by releasing the entire island of Vvardenfell at once.