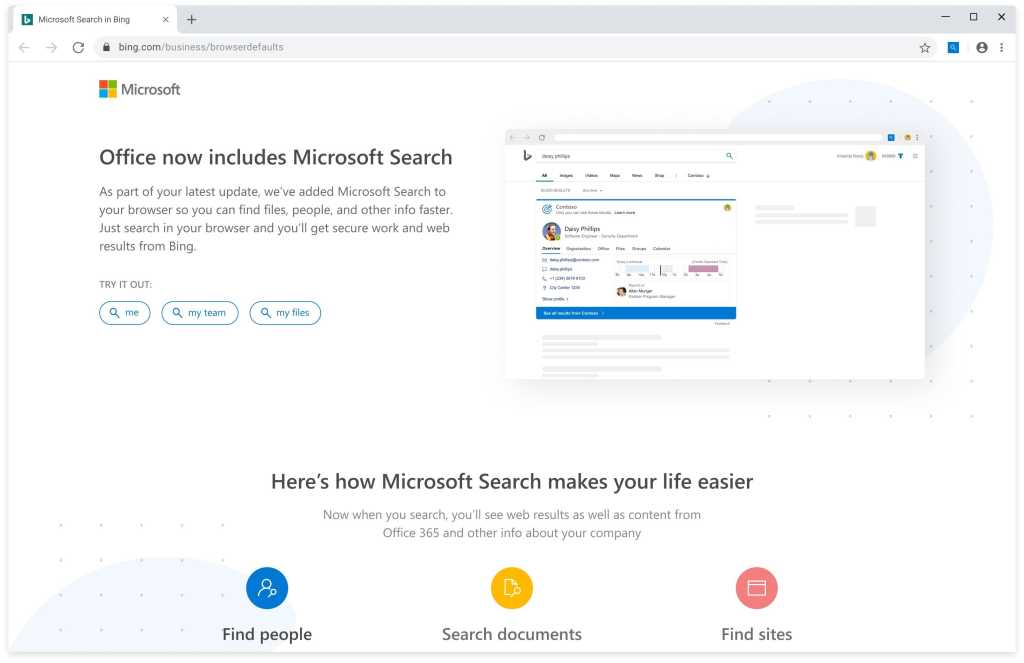 In what seems like a broad case of overreaching, an upcoming version of Microsoft’s Office 365 for enterprises will automatically switch Google Chrome’s search engine to Bing. And Firefox is next on the list.

Editor’s Note: On Feb. 11, Microsoft is saying that it will back off this decision, making it opt-in, as first reported by ZDNet.

”Based on your feedback…The Microsoft Search in Bing browser extension will not be automatically deployed with Office 365 ProPlus,” the company said in an update.

The rest of the original article continues below.

Yes, Google Chrome. Yes, Bing. Microsoft says it’s doing so to enable Microsoft Search, which essentially evolves the Bing search engine into a way to delve through your corporate files and other information. But still, altering another company’s search engine to do so? (We’ve reached out to Google for comment, but the company hadn’t responded by press time. )

Microsoft laid out its plans in a support document that surfaced Wednesday, in part due to a report by Thurrott.com. Specifically, the change will be made to Office 365 ProPlus, a version of Office specific to enterprises. The change will be deployed as early as February for “targeted” users who receive monthly channel updates, and at a later dates for others. Users in the United States and the United Kingdom will be affected, as well as those in some other regions, Microsoft said.

Microsoft refers to the changes made to Chrome as an extension: specifically, adding the Microsoft Search in Bing extension to Office 365 Pro Plus. Here’s how Microsoft explains what it is and what is does: “Microsoft Search in Bing provides a familiar web interface to help your users find workplace information more easily, including files and documents, internal sites and business tools, people and org charts, building information, and other relevant information from within your organization,” it says. “Microsoft Search accesses files, SharePoint sites, OneDrive content, Teams and Yammer conversations, and other shared data sources in your organization, as well as the internet.”

What’s not exactly clear is how Microsoft can sink its hooks into Chrome to do this. The Twitter security handle SwiftonSecurity noted that it actually violates Windows Defender’s prohibition against installing software without your consent. The support document also makes the greater intent clear: Microsoft’s adding the tweaks to Chrome first, but “support for the Firefox web browser is planned for a later date,” it says.

IT admins who don’t want the extension installed have a way around it. Enterprises can use either the Office Deployment Tool or Group Policy to prevent it, but it has to be done before the extension itself is installed. If an admin waits too long, they’ll have to run a command to remove it.

Fortunately, it sounds like individual users will have the option of disabling Microsoft Search as well—though it’s not clear whether admins can lock this down. To disable Microsoft Search and restore Google as your search engine, users should be able to click the magnifying glass “Search” icon next to the address bar in Chrome, and then toggle off the Use Bing as your default search engine selection.

Unfortunately, Microsoft’s efforts to “help” users with Microsoft Search could easily be seen as just another example of the company’s heavy-handed approaches to say, upgrading users to Windows 10. The next natural question to ask is: Could Microsoft do this to consumers, too? Here’s something to think about: In the new, Chromium-based Edge, Microsoft hasn’t touched Chrome’s choice of search engine. But it has buried Edge’s search-engine options in a deep level where they’re difficult to find, and made Bing the default.

Editor’s note: This article originally used the headline “Microsoft’s Office 365 for enterprises will switch Chrome search to Bing, unless you do this” before Microsoft walked back its plans.