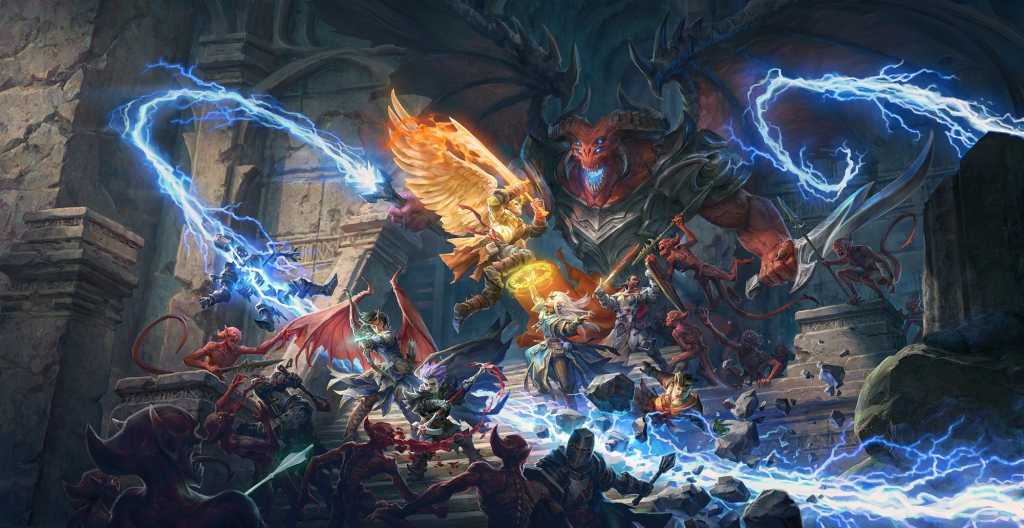 Pathfinder: Wrath of the Righteous

Owlcat Games doesn’t do small. Its first game, 2018’s Pathfinder: Kingmaker, is one of the most ambitious CRPGs I’ve ever played. No mere mercenary, the player eventually rules over an entire kingdom, making decisions that define the fate of hundreds if not thousands of people. A nontraditional monarch, to be sure—one who regularly puts courtly duties on hold to go adventuring—but Kingmaker had an element of the grandiose that’s usually lacking in RPGs.

It was also…well, broken. And where it wasn’t broken, it was impenetrable. There were a lot of strange decisions made with Pathfinder: Kingmaker, decisions that detracted from the remarkable story being told, and only some of which were fixed with the eventual Enhanced Edition.

For their follow-up then, you might think Owlcat would take the lessons from Kingmaker and fold them into a smaller, more focused game—and you’d be wrong. Pathfinder: Wrath of the Righteous is, if anything, even more ambitious than its predecessor. But more approachable? That remains to be seen.

In Pathfinder: Kingmaker, most people never made it past the spiders.

Okay, “most” might be an exaggeration—but only slightly. One of Kingmaker’s earliest sidequests involved going to a certain Fangberry Cave to pick berries. There, players encountered Spider Swarms. Standard fantasy fare, right? No problem.

Except these Spider Swarms were invincible. That’s how it seemed, anyway. You’d send your party into battle, bring your sword down on the first Spider Swarm with a resounding clang, and nothing would happen. Zero damage. Confused, you’d do the same with your other heavy hitter. Zero damage again. Then if you were smart you’d Google “Pathfinder Kingmaker Spider Swarm” and save yourself a lot of trouble.

See, “swarms” are immune to normal attacks in Pathfinder, a rule lifted directly from the tabletop game. Only area-of-effect attacks inflict damage. This makes logical sense, of course—try swinging a sword at a bunch of tiny spiders and see whether it’s effective. It doesn’t make video game sense though, or at least breaks with decades of tradition.

With Pathfinder: Kingmaker’s Enhanced Edition, Owlcat changed its approach. Those playing on lower difficulties could hit swarms with swords, a bandage solution.

Focusing on one instance distracts from the larger philosophical issue though. With Kingmaker, Owlcat faithfully translated Pathfinder’s rules from tabletop to digital. Then it forgot to teach people the rules.

So when I heard Owlcat was making a second game, my first question was “How do you fix that gap?” And to its credit, Owlcat Creative Director Alexander Mishulin didn’t shy away from answering, saying that Kingmaker’s tutorial focused too much on how to play CRPGs in general (i.e. the controls), not specifically a Pathfinder CRPG.

Thus the goal this time is not to abandon the Pathfinder ruleset, but to shepherd players through it better. To be a better Dungeon Master stand-in, essentially.

This comes in many forms. Like Kingmaker’s Enhanced Edition, a crucial part is serving different experiences to different players. Familiar with Pathfinder? Here’s the game with all of the various minutia active. Newcomer? Here’s a simplified version that allows you to (for instance) hit swarms with swords.

The approach varies depending on the situation though, and Owlcat named quite a few during my demo. Leveling can be automated, for instance. Pathfinder’s class system is remarkably flexible, but that same flexibility can be intimidating without context. It’s easy to back yourself into a corner without realizing—which in a tabletop setting, is a problem mitigated by a good DM. Here, the alternative is giving players an idea what a powerful build looks like, then letting them break from that template if they’d like.

The interface now alerts you if you’re wearing armor with incompatible bonuses. Alerts, not prohibits—because maybe you’re doing it on purpose, sacrificing utility for fashion. That’s fine with Owlcat, as long as you’re aware.

Many of Wrath of the Righteous’s hardest encounters are also optional. That’s another part of making Wrath more approachable. Give people a challenge if and when they want it, but don’t grind the story to a halt because of one encounter.

Choices. It all comes back to choices. Owlcat wants Wrath of the Righteous to be every bit as complex as Kingmaker, but with the option to scale back. Pathfinder is a famously crunchy (read: rules-heavy) system, but it doesn’t need to be that way for everyone, maybe.

And I think that’s fine. Again, when playing at the tabletop the DM is given a ton of leeway. Don’t like a rule? Don’t bother with it. Don’t like the outcome on the dice? Fudge it a bit. This is normal, and it’s good. Tabletop is (at least in my circles) about communal storytelling, and the rules should serve the story.

Owlcat’s problem is simply that digital adaptations aren’t as flexible. It’s hard to program a game to fudge a dice roll at the “right” moment, or to be less stringent about a rule if the outcome from ignoring it is more fun. Wrath of the Righteous seems like it’s doing the best it can though—or at least a better job than Kingmaker.

That’s the key, really. I know I’ve spent a lot of time talking about low-level concerns here, about tutorials and leveling paths and such. It’s important though, because those are the aspects that derailed Kingmaker. If Owlcat wants to win people back, wants those who fell off the first game to give Wrath of the Righteous a chance, the message can’t be “It’s Kingmaker, but bigger.” That’s useless. It needs to be (and more importantly is) “It’s Kingmaker, minus some of the rough edges.”

Not that Wrath of the Righteous is smaller or less ambitious. Depicting a conflict between mortals and demons, this is a story wherein the player becomes akin to a god. Mythic Paths add another layer to characters, allowing you to become an undead-commanding Lich or a time-traveling Aeon—or even a Trickster, who can change the game’s underlying dice rolls.

The maps are also impressive. Our demo covered a single event, a demonic assault on the fortress of Drezen. It’s huge, and very vertical—and all one map. Owlcat demonstrated how a crafty player could gain access to the ramparts, then fire arrows and spells down onto hapless enemies below, a decidedly modern addition to the otherwise Infinity Engine-style combat. Oh, and you can now rotate the camera as well. It’s a simple change, but vital. Freed from worrying about the player’s view being obstructed, Owlcat can make taller and more complicated structures.

Story, setting, none of it matters though if Wrath of the Righteous isn’t fun to play. Kingmaker didn’t suffer from a lack of ambition. Owlcat proved it could adapt Pathfinder’s rules and stories to a CRPG. They nailed every big-picture idea I heard them discuss, pre-release.

It was the fundamentals where Owlcat stumbled, and it’s those fundamentals I’m slightly less concerned with after seeing Wrath of the Righteous in action. There’s plenty of work still to be done, and not much of what I’ve discussed here was actually visible in my demo. But the fact that Owlcat is thinking about better tutorials, more granular difficulty options, and such? It bodes well for Wrath of the Righteous.

Would I support the accompanying Kickstarter campaign that launched today? I don’t know. I’m pretty damn skeptical of crowdfunding, and more so when a company’s failed to meet its goals in the past. On the other hand, I find Owlcat’s enthusiasm infectious. I wanted to like Kingmaker, and I want to like Wrath of the Righteous. Hopefully this time, execution will match ambition.