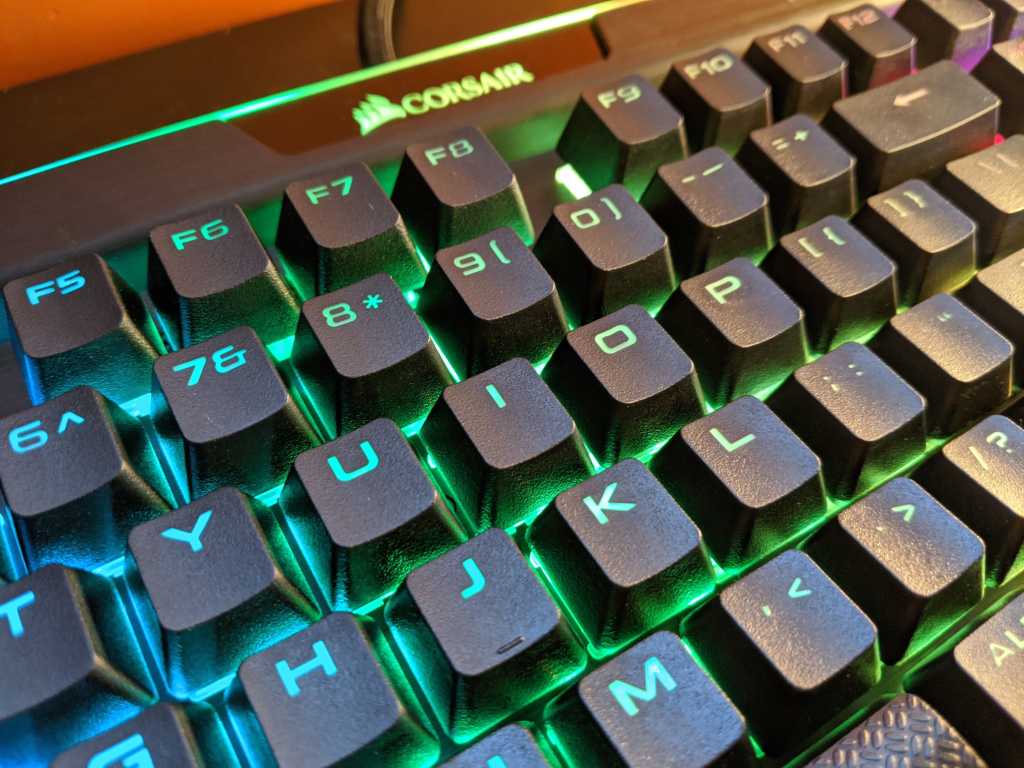 Corsair’s K95 Platinum XT remains a pricey and ostentatious option aimed at a select few, but new Elgato integration, PBT keycaps, and a plush wrist rest make it better than ever.

In 2017 Corsair put out the most ostentatious keyboard I’d ever seen, the K95 RGB Platinum. I dubbed it “the luxury sedan of keyboards,” a nod to its desk-dominating size and captivating lighting—and its eye-watering $200 price tag. Three years later, it’s still the bar by which I measure other premium keyboards.

And yet Corsair’s raising the bar anyway. At CES 2020 we got our first glimpse of the K95 RGB Platinum XT, Corsair’s attempt to better its own best-in-class keyboard. Now after spending time with one at home I can say they succeeded, even if only slightly. It’s hard to build on near-perfection.

This review is part of our best gaming keyboards roundup. Go there for details about competing products and how we tested them.

The K95 Platinum XT is every bit as beautiful as its predecessor, a sentence I write with a smile and wink because nothing’s really changed. Not at first glance, anyway. Corsair’s aesthetic is as sleek as it is familiar: Exposed metal backplate, raised keycaps, macro column down the left side, volume roller with assorted media keys in the top right, slanted wrist rest.

Oh, and as of 2017? The light ribbon. Unique to the K95 Platinum, an RGB strip runs across the top of the keyboard. I called it “Peak RGB” in our previous review, and congratulations to Corsair for retaining that title. Yes, three years later I’ve yet to see anything as showy—barring perhaps Razer’s Huntsman Elite and its RGB wrist rest.

Let’s call it a tie.

It’s one hell of a showpiece, either way. I like it, though you’re definitely committing to living inside Tron—or at least turning your desk into Tron. That won’t be to everyone’s tastes, but it certainly sets the K95 Platinum apart from Corsair’s other keyboards.

That was last time’s innovation though. The Platinum XT merely retains the light ribbon, and thus deserves no special credit here. So what’s new to the K95 Platinum XT?

First and foremost, Corsair finally upgraded its pack-in wrist rest. Corsair was early to the wrist-rest-as-value-add. Every K70/K90/K95 I can remember reviewing has had one. But being first to a trend only means everyone else has a chance to do better—and do better, they have. In recent years both Logitech and Razer have started offering plush leatherette wrist rests with their flagship keyboards, which made Corsair’s cheap plastic solutions feel dated. The previous K95 Platinum upgraded to a rubber-and-plastic hybrid, but it still wasn’t enough.

The K95 Platinum XT finally makes good though. Corsair’s kept the same wedge shape as before, but the wrist rest is now coated in leatherette and generously padded. I think I still like Logitech’s best, as they’re the only ones with edge-to-edge leatherette instead of a plastic bezel. That said, this is still a substantial improvement for Corsair, and feels much more like what I’d expect from a $200 keyboard in 2020.

Next up, the keycaps. When we reviewed the Razer Huntsman Tournament Edition in late 2019, I wrote that “Where Razer goes, I’m sure Logitech and Corsair can’t be far behind.” Turns out, Corsair was even closer on Razer’s tail than I expected.

What am I talking about? PBT keycaps. Razer introduced this premium-grade plastic on the Huntsman TE, and now barely a month later Corsair’s used it with the K95 Platinum XT. PBT is thicker and more durable than the traditional ABS plastic, and resists that oily sheen that develops over time on well-worn keys.

It’s a subtle difference. Subtle enough that your average user won’t notice the changeover, except perhaps that the keys seem more textured and the backlight sliiightly dimmer. But otherwise the K95 Platinum XT looks pretty much identical to its ABS-using predecessor, and there’s been no noticeable impact to the feel of the keys.

PBT is simply better quality though, and has been popular in enthusiast circles for years. With Corsair and Razer now both machining PBT keycaps, I think it’s safe to say the trend is mainstream. People will benefit whether they realize it or not. And it’s worth mentioning that backlight-ready PBT was almost impossible to find before. It’s hard to know whether Corsair and Razer invested the money to solve that problem, or whether it was solved and that’s why we’re seeing them convert over. Either way, it’s an interesting development.

The K95 Platinum XT is also the first Corsair keyboard (to my knowledge) to use Cherry’s more durable switches, though this is a bit less meaningful. Might as well mention it though, as it is one of Corsair’s back-of-box selling points. Previously, Cherry MX switches were rated for 50 million presses per key—meaning after that point, they might be less consistent or worst case might fail completely.

50 million sounds like an astronomical number, and it is. Remember, it’s per key. Even if you hammer at a consistent 100 words per minute nonstop, 12 hours a day, your most-used key (the spacebar) would still take ten years to hit that 50 million keystroke mark. You’re probably safe.

Manufacturers use it as a selling point though, and Cherry just upped its fault tolerance to 100 million keystrokes per key. So uh…twenty years for even the most dedicated typist. As I said, it’s probably a meaningless change, though it does bring Cherry’s numbers in-line with Logitech and Razer’s bespoke switches. I’d guess that’s the reason behind the more stringent testing.

Anyway, I’m still just happy Corsair uses Cherry switches. The various Cherry knockoffs have gotten a lot better in recent years. Like, a lot. You can’t go wrong with Cherry though, and I’m fond of both the tactile MX Blues and ultra-light MX Speeds for typing and gaming, respectively.

The final change for the K95 Platinum XT appears to be primarily software-side, which makes me wonder why Corsair didn’t simply push out an update for the old K95. Or maybe it did? I’m not sure. 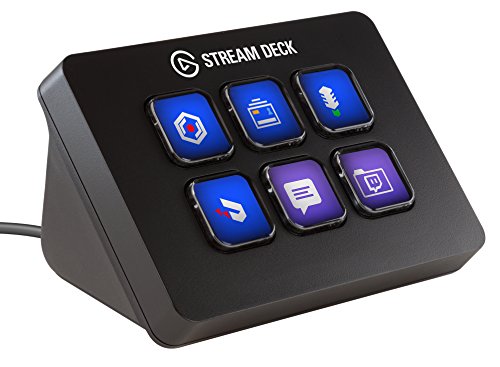 See, Corsair purchased Elgato in 2018. The two brands haven’t cross-pollinated much to this point, but the K95 Platinum XT is set to change that. The column of macro keys down the left side? They double as “Streaming” keys, using the same software that drives Elgato’s Stream Deck hardware.

The K95 doesn’t feature miniature OLED displays, like the Stream Deck and Stream Deck Mini. Instead you get a set of blue keycaps, simply marked S1, S2, S3, and so on. A bit disappointing.

You can map any of your most-used streaming commands to the K95 though, which is a great idea for those who don’t want to go all-in on the Stream Deck (or want to supplement it maybe). Want a key that starts and stops your stream? Or one that switches scenes for you on-the-fly? Or maybe even a key that tweets that you’re starting your stream?

There are a lot of options, and a lot of them useful. More than you could possibly fit on six keys really, and I suspect that devoted streamers will still find more than enough use for the Stream Deck proper. Still, as a value-add for the K95 keyboard? It’s compelling stuff. I never have much use for macro keys, but I could absolutely see adding some of Elgato’s software commands to my workflow. It’s a smart and unobtrusive way for Corsair to take advantage of its unique position in the streaming ecosystem.

Small changes, as I said, and many of them strictly geared towards enthusiasts. A comfier wrist rest is worth getting excited about, but PBT keycaps? “More durable” Cherry MX switches? Streaming software tie-ins? Most of these are geared towards very niche audiences.

The Corsair K95 Platinum XT isn’t any worse for their inclusion though. Slightly better remains my verdict, after some hands-on time. And while $200 is a steep price, I think the value is there regardless. The K95 Platinum XT is one of the best keyboards on the market. It’s attractive, durable, and packs a ton of premium features—even if those features become increasingly esoteric with each revision.