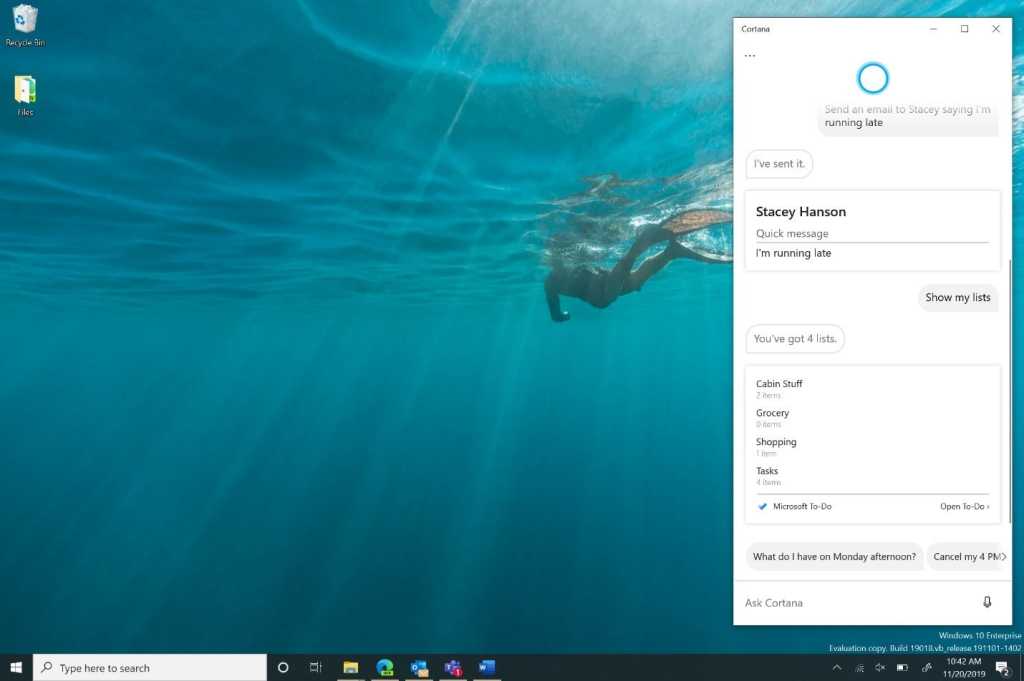 Now known as the Windows 10 May 2020 Update, what was formally called Windows 10 20H1 (version 2004) looks like it’ll finally be giving Windows users something to talk about. Using Microsoft’s Insider builds as a guide, you can expect the most significant changes in the Windows Subsystem for Linux, Cortana, Windows Search, and Your Phone. There’s also the usual mix of small “utility” improvements and conveniences.

Before we dive deeper into the new features to expect, let’s talk timing. Microsoft’s wrapped development on the Windows 10 May 2020 Update, and has begun delivering the “final” version to the Release Preview ring of the Windows 10 Insider program. We still don’t know exactly when it will be released to Windows 10 PCs at large, though we know it will be sometime in May.

In the meantime, let’s go through the biggest changes you can expect within the Windows 10 May 2020 Update.

When Microsoft added the Windows Subsystem for Linux as part of Windows 10’s Anniversary Update in 2016, it was mindblowing: Linux, which Microsoft publicly hammered for years, was now within Windows! But the original Windows Subsystem for Linux was hobbled by the fact that it wasn’t running a real Linux kernel. Certain kernel modules, such as device drivers, were unable to run.

That’s changed within the Windows Subsystem for Linux 2 (WSL2), which essentially runs a real Linux kernel inside a virtual machine (even on Windows 10 Home). If you use Linux, you’ll also be able to place your Linux files within the Linux root file system, and access them via Windows File Explorer.

Unfortunately, there are still limitations. Microsoft’s said that you won’t be able to use VMWare, or versions of VirtualBox before VirtualBox 6, or tap into system resources like the GPU or even USB peripherals within WSL2.

If this means absolutely nothing to you, don’t worry—you’re absolutely not required to run Linux, and it won’t interfere in your day-to-day computing. If you do want to try out Linux, however, it’s there.

Cortana: On the move

Microsoft’s Cortana is now a bit less of an assistant and a bit more of an app. In the May 2019 Update, Cortana separated herself from the Windows Search box, and now she’s moving on: You’ll be able to resize the Cortana window, and move it around your screen, just like any other app. You’ll be able to type Cortana queries, just like you were able to when she was part of Windows Search.

Microsoft’s also evolving Cortana’s conversational style to be less of a question-and-answer session and more of what it hopes will become a dialogue—“a personal productivity assistant that helps you in the Microsoft 365 apps,” in Microsoft’s words. That’s entailed some rebuilding of the app itself, temporarily losing some capabilities as new features are developed. We expect the app may still be somewhat basic when 20H1 launches, and that the conversational elements will be added later. We’ll take a closer look at Cortana as we test it, hopefully discovering some new capabilities.

Windows Search: Dialing it down a bit

Any breakup can be messy, and Windows Search responded by hitting the gym and pumping up the search indexer underlying the instant search results in the Windows 10 November 2019 Update. Last year also saw Microsoft add “Enhanced Mode” search, which expands the search beyond your libraries (Downloads, Documents, and Pictures) into the desktop and other areas of the drive.

But the poor thing went a bit too far, so that Microsoft is now dialing back the search indexer’s ability to scour your hard drive, waiting for times when the PC is less busy. Some of the other improvements that Microsoft scheduled for 20H1 actually appear in some stable builds now, including the four “quick searches” buttons that appear at the bottom of the Windows Search box: “Weather,” “Top News,” “Today in history,” and “New movies.”

Windows Search will also feature new, compact previews of webpages when you perform a web search.

Microsoft seems to be working hard to detach as many apps and functionalities as it can from Windows 10 itself, in order to give them their own unique, independent upgrade path. (Microsoft’s new Edge browser is a good example.) Your Phone has been on its own journey, with new features migrating from the Windows 10 Insider channels to the stable version of Windows 10. We looked at the updated Your Phone experience last November, noting what you’d need to enable photos, SMS messages, interactions with your phone’s screen, and even the ability to place calls. At the time, Your Phone worked best with a PC configured with the Windows 10 Insider program.

Microsoft already has several of these features enabled for the stable version of Windows 10. On a OnePlus 6T and a Surface Laptop 3 running the stable version of Windows 10, I can view photos, send texts, place calls, and receive notifications. I can’t interact with the phone’s screen, though, and photos are limited to just 25 images. We’re hoping to see more of this functionality extended to a broader range of devices.

Under the hood: The good stuff

Some of the best features of Windows 10 aren’t explicitly called out, and won’t be discovered unless you poke around in the nooks and crannies of Windows 10. Based on the Insider previews Microsoft has published, we’re looking forward to trying out these new features:

About a year ago, Windows 10’s May 2019 Update added kaomoji as an upgrade to its existing emoji keyboard. We expect the next version will offer additional ways to pep up your email, chat, and social networking apps.

If you detested the “tile” interface of Windows 8 but the “desktop” interface was too cluttered for your fat fingers, Microsoft may have the answer. Everything’s spaced out a little wider in this new mode, specifically designed for the Surface Pro 7 and other Windows tablets.

The current Network & Internet > Data usage Settings page is being folded into the Network Status page to provide more of a data dashboard. A small change, but a welcome one.

Okay, it’s geeky. But we hate digging out the SSD type from the Device Manager, and it’s handy to have a small indicator telling you what the GPU temp is, even if third-party utilities monitor it anyway.

Of course, that’s not all of the new features we expect to see in Windows 10’s spring update. We’ve even held back one or two of our potential favorites, just to see if we’re right. We’ll continue to poke and prod Windows 10 20H1 in the weeks leading up to a formal release. Our Windows 10 May 2020 Update review is now live, too!