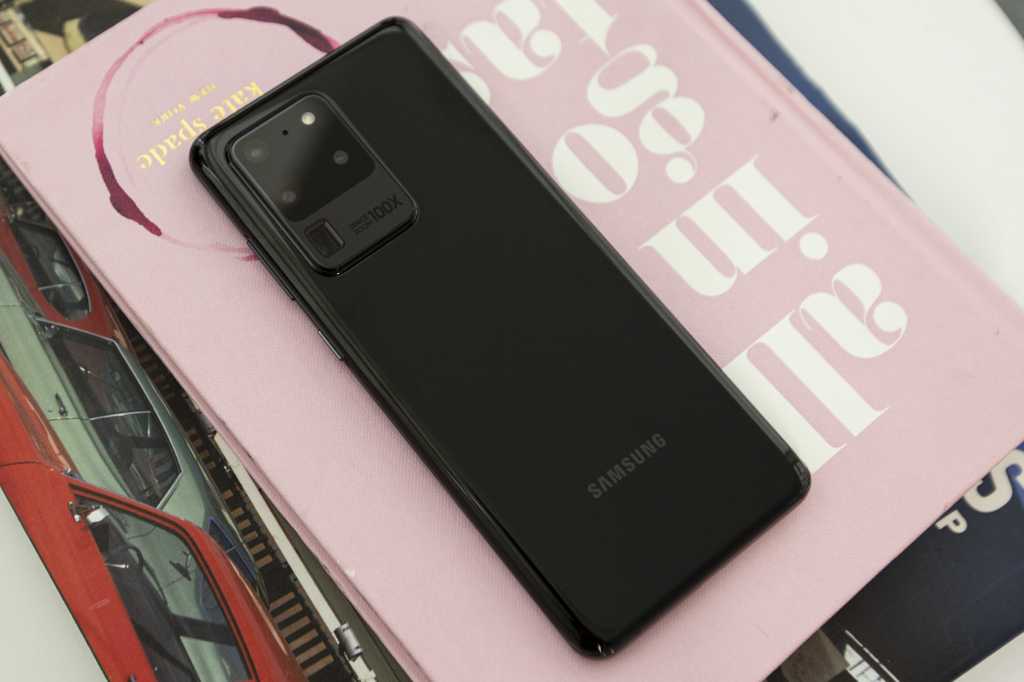 The Galaxy S20 Ultra is the most phone I’ve ever held in my hand. I’m not just referring to the screen size—a hair under 7 inches—or even the weight, which tips the scales at 220 grams. It’s the whole package, which oozes luxury and excess in a way no Galaxy phone has ever before.

At a quick glance, the S20 Ultra doesn’t seem all that different from the S20 or S20+: You get the same basic features in increasingly larger displays (6.2, 6.7 and 6.9 inches, respectively, as you step up the line). But as soon as you pick up the Ultra, you can feel the difference. It feels more substantial than any other I’ve ever used, including the iPhone 11 Pro Max. It’s hefty without being too heavy, and gigantic without being cumbersome. That’s with a display that’s even bigger than Samsung’s recent 6.7-inch behemoths.

Even though the S20 Ultra is the thickest Galaxy phone since the S5 (and that thickness doesn’t even include its bulbous camera bump), the girth complements its tremendous size surprisingly well. The rounded corners and slimmer bezels give it a sleeker look than the Note 10. The taller aspect ratio makes it feel smaller and gives it a surprising holdability.

Samsung’s color options, which are limited to somewhat staid black and gray, also give the phone a slimming appearance. That said, the extra millimeter of thickness that the Ultra has on the S20 and S20+ is palatable, and you’ll notice it, even if the phone you’re coming from is several years old.

While you’ll find a ton of power inside the Ultra’s chunky frame, you won’t be able to plug in your wired headphone without an adapter. This was to be expected after the Note 10+ dumped the headphone jack last year, but it still stings given the S20 Ultra’s otherwise maxed-out spec sheet.

You get most of the same performance features across the the S20 line-up, but the Ultra packs a few more pixels into its Quad HD+ Infinity-O display. Samsung has finally brought a high refresh rate (120Hz) to a Galaxy phone, and it feels luxurious, like my fingers were running through water rather than mud. However, you’ll need to keep the Ultra locked to Full HD if you want to use that refresh rate, which is a major bummer.

The S20 Ultra is powered by the same top-of-the-line Snapdragon 865 processor and 12GB of LPDDR5 RAM as the S20, and includes 128GB of base storage, a 5G modem, and an ultrasonic in-display fingerprint sensor. I’d much rather have 3D facial recognition on a phone this big, but Samsung is still using the less-secure selfie camera for face unlock. Nonetheless, during my hands-on I did see an improvement in the accuracy of the sensor compared to the one on the S10+, especially when using my thumb. I attribute this largely to the sensor’s new position, higher on the screen.

The S20 Ultra is extra-thick because it includes the largest battery Samsung has ever shipped in a phone: a whopping 5,000mAh cell. That’s a healthy boost from the S10 5G’s 4,500mAh capacity, and I’d be lying if I said the Note 7’s exploding battery wasn’t in the back of my mind while holding it. But with a 5G modem and a 120Hz 6.9-inch display, the Ultra is going to need every ounce of juice it can get.

Zoom to the moon

While the super-sized display and battery certainly set the Ultra apart from its S20 siblings, the main reason to drop $1,400 on it (or $1,600 if you opt for an insane 16GB of RAM) is the camera. And for that sky-high price, you also get a bit of unsightly “Space Zoom” branding on top of an already unappealing camera bump.

That’s not a typo. The S20 Ultra has a ridiculous 108MP sensor, which is a bit of marketing bluster. Any photographer will tell you that megapixels don’t make a great camera, but Samsung has done some pretty cool and innovative things with the sensor. Using a process called nona binning, the S20 Ultra’s main camera merges nine pixels into one to create a 12MP image using the entire 108MP sensor.

In real-life results, that means the S20 Ultra’s pictures will have more detail in full light and less noise in low light. Samsung says the Ultra’s camera will dynamically switch between the full 108MP and 12MP modes to bring in three times more light than the S10+ (which has always been a bit disappointing when it comes to nighttime shots).

During my hands-on demo, I didn’t get a chance to test the camera in low light, but I did get to test the S20 Ultra’s other over-the-top camera feature: 100X Space Zoom (also not a typo). Like the Huawei P30 Pro and other long-zoom phones with periscope lenses, the S20 Ultra’s telephoto camera sits sideways in the device and refracts the light through a prism at a 90-degree angle.

Samsung says this proprietary hybrid optical and AI-powered digital zoom solution is able to achieve 10X lossless zoom and 100X max zoom, both of which are impressive claims. I was in a pretty small room (and I got yelled at when I tried to shoot out the window), but the Ultra was able to zoom way further than any other phone I used. Without OIS, it was extremely hard to control at even 30X and nearly impossible to keep steady at 100X, but a mini zoomed-out viewfinder in the corner of the screen did help maintain some semblance of position. The photos I snapped, while extremely noisy and hazy, were surprisingly legible.

Space Zoom may very well be the thing that compels a few fence-sitters to take the $1,400 plunge, but it’s the smaller camera advancements that will make or break the S20 Ultra. These include enhanced low-light mode and nighttime hyperlapse; 8K video recording; improved Super Steady; and a cool innovation called Single Take mode, which was the smartest S20 camera trick I tried. Instead of fussing with modes and cameras, you need only take a 10-second video of the scene in front of you, and the S20 will use AI to decide which pics and video clips best capture the moment.

The Galaxy S20 Ultra is probably too much phone for most people, but never have I held a phone that felt so consequential. Granted, you’re going to pay dearly—a $1,400 starting price makes the iPhone 11 Pro Max seem like a bargain—but switching between the S20+ and S20 Ultra felt more dramatic than going from the S10 to the S10+.

Even more than the Note 10+ 5G, the S20 Ultra is absolutely the biggest and best phone Samsung can build right now (except for that pesky missing headphone jack). Is it excessive? Unapologetically so. But I’ll take it over the Galaxy Z flip any day.