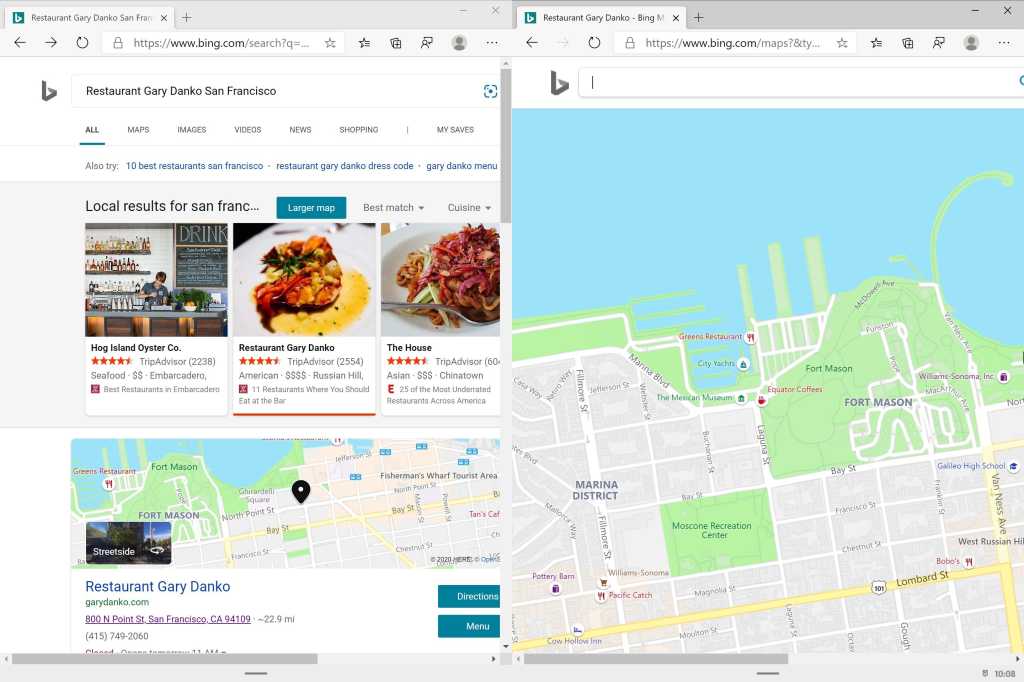 Is it fair to call Windows 10X a casual OS? After spending a few hours with the emulated version of Microsoft’s upcoming dual-screen OS, I can share it feels a bit like a tablet OS mixed with a phone OS mixed with Windows 10—with a bit of fun and frustration mixed in.

Editor’s Note: This is the dual-screen implementation of Windows 10X, Microsoft’s original vision for the OS. The company has since shifted to a single-screen approach. Our hands-on of the dual-screen vision is below.

After learning about Microsoft’s Windows 10X at a Microsoft developer day on Tuesday, I took the OS for a spin using the new Microsoft Emulator app, once designed for Windows phones but now adapted for dual-screen devices like the Surface Neo. What Microsoft demoed is essentially an alpha version running under a simulator. Performance was lousy, sure—but right now, that’s not the point.

The short story? I liked it.

Windows 10X feels neither exceptionally deep nor powerful, but rather something that a casual user might pick up, use, set down or tuck back into a pocket. In some ways, Windows 10X feels like the “light” version of Outlook. Certain aspects—the emoji-packed Wonder Bar, for example—feel exceptionally smart. Other elements, such as the inability of the Photos app to separate itself to perform edits on another screen, simply left me shaking my head.

Regardless, the dual-screen Neo isn’t due to ship until the end of this year, so Microsoft still has plenty of time to polish the experience I demoed on Tuesday.

Microsoft’s emulator allows you to try out Windows 10X in a variety of orientations. The most interesting ones take advantage of both screens, either in a “book” mode (with both screens in portrait mode) or in a dual-landscape arrangement (like a traditional notebook PC). Other options include a single-display “tablet” mode, where the additional screen is folded back out of sight.

(A quick note on screenshots: Microsoft’s Windows 10X Emulator app removes the physical “gap” between screens when capturing a screenshot. However, in certain illustrations below I preserved it by taking a more conventional screenshot via Windows’ Windows Snip app.)

The Start interface: some familiar faces are gone

At least via emulation, Windows 10X provides no Out of the Box experience, no Cortana welcoming you to Windows. In fact, I didn’t see Cortana at all, anywhere. The home screen was especially spartan, with absolutely no apps at all. (I couldn’t seem to be able to pin an app icon to the desktop, though I would expect that feature to be in the final release.) Both screens were just pale blue sheets of virtual glass, with a small slider handle at the bottom serving as a visual cue to indicate the presence of the taskbar.

Windows 10X does away with the familiar Start icon in the lower left-hand-corner of the screen. Instead, the taskbar on either pane hides a Start button, which opens a Start menu that looks suspiciously like Android’s app drawer mixed with the Windows 10 Office app. It’s a neat arrangement of icons, together with your most recently-used files. Meanwhile, Windows 10’s tiled interface, a holdover from Windows 8, is completely gone. There’s also what appears to be a Windows Search box, though without any Cortana integration.

Twice the screens, twice the fun (and frustration)

Windows 10X houses a variety of the apps you’re used to in Windows 10: Mail, Calendar, Edge, File Explorer, Calculator, Alarms & Clock, and so on. At least in the “book” orientation, opening an app launched that app in a single pane. When launched, apps produced a small “loading” animation that appeared for a split second.

Disappointingly, opening a second app launched it over the first, instead of filling the vacancy in the empty pane.

Hopefully this will be fixed, because opening an app in one pane, and then a second app on the other pane… well, that’s why Microsoft hopes you’ll be buying a Windows 10X device. It’s a simple yet powerful concept: more screens equals more productivity. Researching a restaurant on one screen and then pulling up a map on the other—excellent! Checking your email on one screen while reviewing your Calendar app on the other—that’s what you expect from Windows.

Sure, there are limitations. Apps will fill each pane. Dragging an app to the upper corner fills half of that pane, for a total of four apps. (Granted, the relatively small size of the Surface Neo may simply preclude too many apps from being used.) There’s some real value here in the simple addition of a second screen.

Choices matter, too. Because there’s a physical gap between the two panes, a Web page viewed in “book” mode simply looks bad. But in “laptop” or dual-screen landscape mode, I found it much more tolerable. While Microsoft has shown off Windows 10X using both panes to display content in magazine format—one page on the left-hand-pane in a “book” layout, and the other page on the right-hand-pane—I couldn’t figure out how to make that work.

Some Windows apps simply weren’t designed to span across dual screens. Take the Photos app, for example. Ideally, you’d be able to display an array of photos on one screen, while editing one of those photos on another. But unfortunately that’s not the behavior in Windows 10X, and it’s frustrating.

But let’s give credit where credit is due: Windows 10X also includes nuggets of sheer delight. For one, I really, really like the sheer utility of the Wonder Bar, Microsoft’s name for the strip of screen space that’s left over when the Surface Neo’s physical keyboard is folded over to cover a portion of one of the screens. Microsoft has done a nifty job of populating the Wonder Bar with emoji, kaomoji and suggested words for typing, all of which fit naturally into a mobile keyboard experience. Within Windows 10, these options are buried behind shortcuts and key commands.

Menu options also allow the Wonder Bar to fill up with GIFs, formulas, and even a dedicated space for handwritten e-ink. You can even see snippets that you’ve stored within the Clipboard. It looks terrifically fun to use even in Microsoft’s emulator, and I really hope that it delivers the goods in real life.

As on Windows 10, Windows 10X puts an Action Center in the lower right-hand-corner, with notifications that pop up when new apps are installed or presumably when you’ll receive an email. But the icon is ridiculously small, and only when clicked does it reveal a small nest of shortcuts for adjusting sound, brightness, configuring remote displays and the like.

The final piece of the puzzle is how Windows 10X handles legacy Win32 apps. Because Windows 10X carries over the trusted app model from Windows 10 S, Microsoft would like you to run apps from the Windows Store, but also allows signed apps, as well as apps with a good “reputation score.” Legacy Win32 apps, however, are banished to a new Win32 Container, which isolates them in a manner not quite consistent with a virtual machine, but close. They’re accessed by “proxy” versions of the apps themselves, which essentially connect remotely to the actual app stored in the Win32 Container.

Apps that didn’t run under Windows 10 S—Notepad, for example, and the Command Line—do currently run under Windows 10X, visually indicated in the emulator by a darkening of the background, and, in certain cases, a small header at the top that notes that Windows 10X is launching a proxy app. However, other apps, like Slack, didn’t run—or at least launched via proxy so slowly that I gave up before the process completed. These are early days, of course, though app developers will actually need to get their apps up and running to test them.

Other apps that you’d expect to see—Microsoft Office, namely—haven’t yet made an appearance. There’s not even a version of Wordpad.

Microsoft appears confident that Windows 10X’s trusted app model won’t necessitate the use of antivirus software. Neither Windows Defender nor any other antivirus program appeared in the emulated version of Windows 10X.

I’m still not completely sold on what Microsoft’s Surface Neo actually is, or why someone should favor it over a traditional laptop. But if Microsoft comes out of the gate leaning on it as some sort of a replacement for the Surface Go, it might be on to something.

Windows 10X will certainly supplement Windows 10, not replace it. The crotchety long-time Windows users will eye the Win32 Container apps with suspicion, and grumble at the potential performance penalties for what’s essentially a sandboxed app. No matter. What Microsoft is showing us in Windows 10X looks surprisingly decent. Now let’s hope the dual-screen hardware and the software come together in time for the holidays.

Correction/Clarification: While an app window can’t apparently be manually resized to custom dimensions, you can snap a windowed app to the corner of the screen, allowing for four apps on a dual-screen device. Updated at 9:29 AM with additional details.