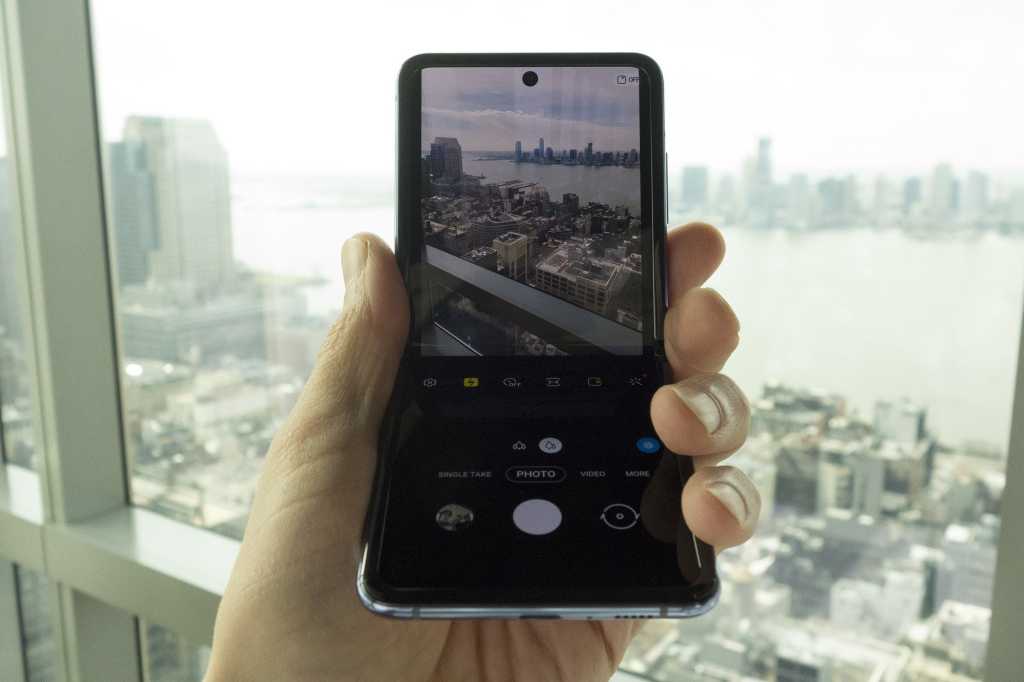 Update 2/14: The Galaxy Z Flip is available for purchase for $1,380, though the Unlocked and AT&T models are currently sold out. Sprint subscribers can still order one for delivery on February 18.

As soon as I picked up the iPhone back in 2007, I knew that the future of the smartphone had arrived. I feel the same way about the Galaxy Z Flip.

When I flipped it open for the first time, the Galaxy Z Flip was as much of a revelation as the first time I slid my finger to unlock the original iPhone. The other folding phones I’ve used from Huawei, Royale, and Samsung have all felt a little off, almost like they were movie props meant to look like futuristic phones. From the plastic screens to the uncertain form factors, folding phones might be wow-worthy, but they haven’t felt like the kind of product that could change the way we think about smartphones.

That’s not the case with the Galaxy Z Flip. Transforming it from a somewhat thick but very pocketable 3-inch square to a 6.7-inch full-screen smartphone is both nostalgic and futuristic, conjuring memories of the Nokia 2720 or the Motorola razr while simultaneously offering a truly postmodern smartphone experience. After using it for an hour, switching back to my Pixel 4 felt like going from power windows to a hand crank.

When closed, the enclosure feels as solid as the Galaxy Fold, with a hideaway hinge that nearly closes it perfectly flat. You’ll see a millimeter or so of light near the hinge, but it’s much flatter than the Galaxy Fold. I can’t speak to whether the Galaxy Z Flip’s hinge will hold up to months of use, but I didn’t see any obvious way for dust or debris to get in. It has a magnetic closure that’s extremely satisfying to close—and yes, snapping it shut will hang up on a call. The hinge mechanism feels sturdy without being sticky, but you’ll likely need two hands to open it. That’s not a criticism per se, but you can’t really casually open it as you did on the flip phones of old.

But while the hinge on Galaxy Z Flip is a clear improvement over the Galaxy Fold, the biggest difference is the screen. It’s still not perfect: In the right light, you can still see the hinge crease, and if you run your finger over the center of the screen, you can feel the bump. But otherwise, the Galaxy Z Flip feels just like a Galaxy S20 you can fold. The ultra-thin glass is smooth and sturdy. I tapped, touched, and swiped at the display just as I would on my regular phone, with no perceptible difference between it and the Galaxy S20 next to it.

When opened, the Galaxy Z Flip looks something like a notch-less iPhone 11 with relatively thick but nicely symmetrical bezels, but they’re not distracting at all. If anything the extra bezel helps, because the phone’s narrow shape tends to encourage a palm-heavy grip. During my time with it, I didn’t experience any issues with accidental touches, as I sometimes do on bigger Galaxy phones.

The Galaxy Z Flip isn’t as speedy as the Galaxy S20, but the Snapdragon 855 processor inside it is plenty capable. It’s got a fingerprint sensor built into the side power button, and the bottom half of the case has wireless charging. The 3,300mAh battery is a bit on the small size, but battery percentage didn’t drop too precipitously during my time with it. I did notice that the phone got a little warm, however, even though I wasn’t doing anything processor-intensive.

A new kind of UX

But as nice as the Galaxy Z Flip is when fully opened, it’s at its best when half-closed. That’s when Flex Mode kicks in, letting you rest the bottom half of the screen on a table and adjust the top for optimal viewing. (I found that when the screen was bent to around 75 degrees, it slowly drooped until it fell flat.) A few apps are optimized with bottom controls and a top viewing area—YouTube, Duo, Camera, and Gallery—but even ones that aren’t optimized work surprisingly well.

For example, when typing a note, the keyboard naturally took up most of the bottom screen, so it felt like I was typing on a tiny laptop. The flexibility was handy when holding the Flip as well. Bending the screen while using it helped with both glare and ergonomics, and made the 6.7-inch screen feel much more manageable than the Note 10+. There’s no distortion when images are spread across the fold, and you can still tap targets even if they’re in the middle of the fold.

It’s surprising that more of Samsung’s own apps don’t take advantage of the Galaxy Z Flip’s UI uniqueness, but those will come. For now, Camera is the best of the bunch, with nice flat controls and a full viewfinder, but I also liked the ability to swipe on the bottom screen to flip through photos in Gallery. Even the always-on display recognizes Flex Mode and will keep the time on the upper half.

Speaking of the camera, the Galaxy Z Flip has one gimmick that’s very fun: using it as a selfie cam when closed. The only screen to speak of on the outside of the device is the 1.1-inch cover display (which seems even smaller in person), but in a pinch, you can double-click the power button/fingerprint scanner to bring up a tiny image of yourself and swipe to switch between the wide and ultra-wide cameras. It’s not something you’re going to use very often, but I was happy with the results.

You can also use the mini-touchscreen to control music and answer calls—a surprising amount of functionality for such a tiny display. While significantly smaller than the Galaxy Fold’s 4-inch display, I think it’s ultimately an improvement in usability. It’s kind of like a smartwatch, with time, date, notification, and simple controls so you don’t need to open your phone as often. When you need to, it’ll open to the app you need, like Messages when a text arrives.

Like the original iPhone, folding phones still have many years of evolution ahead, but the Galaxy Z Flip is a tremendous second effort, especially in light of the Galaxy Fold’s woes. Samsung might have nailed the hardest part of creating a revolutionary device: convincing people that change isn’t just coming, but it’s worth the investment.