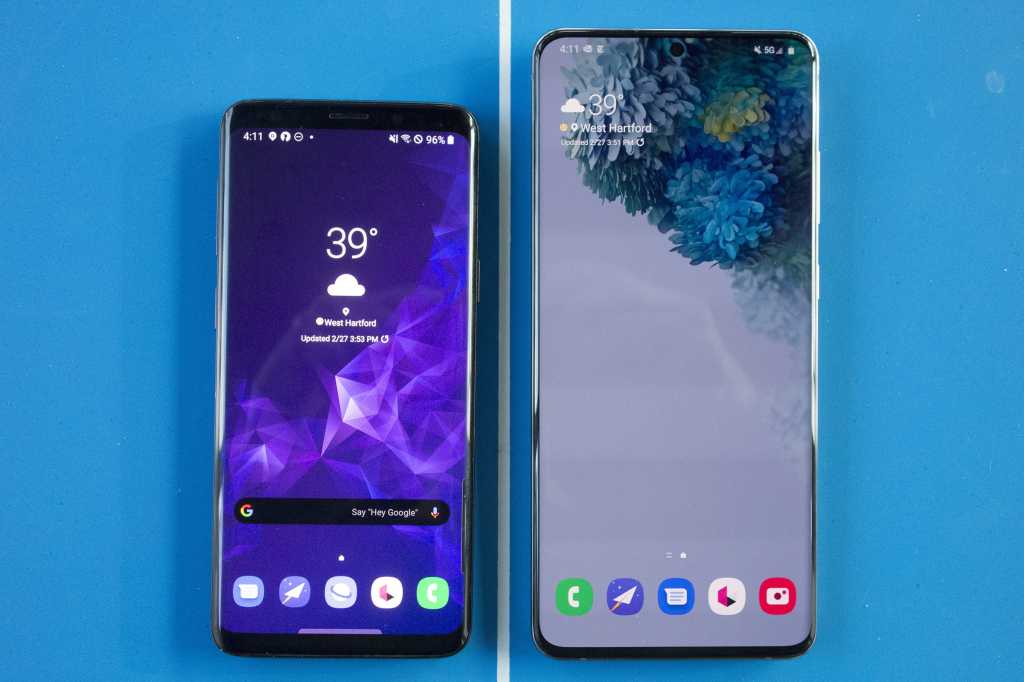 I have a confession to make: My favorite phone right now is the Samsung Galaxy S9. Yes, the one from 2018. I’m testing the 6.9-inch Galaxy S20 Ultra and running Android 11 on the 6.3-inch Pixel 3 XL, but when I want to kick back with my phone of choice, these days I’m reaching for the Galaxy S9 and its 5.8-inch screen.

In just the past few months, we’ve gotten the 6.67-inch OnePlus 7T Pro, 6.8-inch Galaxy Note 10+, 6.8-inch LG V60, and 6.9-inch Galaxy S20 Ultra, all of which are extremely cumbersome. It’s gotten to the point where the 6.5-inch iPhone 11 Pro Max is on the small side (which is probably why Apple is rumored to bump the size of its biggest flagship to 6.7 inches this year).

But at least Apple makes an iPhone that’s under six inches. If you want a decent Android phone that can actually be used with one hand, your options are basically a 5.6-inch Pixel 3a or a Galaxy S10e. The Galaxy S20 starts at 6.2 inches and goes up from there, nearly half-an-inch bigger than the Galaxy S9 from just two years ago. Take a look at how phones sizes have increased over just the past three generations:

Bottom line, premium Android phones have ballooned over the past two years and are just plain too big now, especially when you factor in the ever-taller screen ratios. The Galaxy S20 Ultra barely fits in my pocket, and its tremendous size makes it difficult to use—even with two hands. Case in point: I’ve been experiencing issues with autofocus that’s at least partially due to my inability to keep it still while snapping a pic.

And I have fairly big hands. My wife wouldn’t even consider the Galaxy S20 Ultra, effectively shutting her out of the best camera features just because she doesn’t want a phone with a 6.9-inch display. Choosing between screen sizes is one thing, but forcing buyers to choose a phone that’s downright unwieldy just to get the best features is just wrong. And beyond the fear of missing out, they’re just too heavy, fragile, and awkward.

I simply don’t understand why Samsung dumped the 5.8-inch model with the launch of the Galaxy S20. For most people, it’s the perfect size, big enough to get work done but not too big where you can’t use it with one hand. But if you want an S20, you’ll need to get a phone with a screen that’s at least 6.2 inches with a noticeably larger body than the Galaxy S10e.

A half an inch of screen size might not seem like much, but it makes a huge difference. Compared to the Galaxy Note 10+, the S20 Ultra is only 4.6mm taller, but for the impact it had on my grip and reachability, it may as well be a foot. By comparison, the Galaxy S20 is 9.5mm taller than the S10e, so by jumping from 5.8-inch to a 6.2-inch screen you’re getting a significantly bigger phone, too, which for many will cross the line from useable to unbearable.

But phone makers don’t seem to care. I’m willing to bet that next year’sGalaxy S30 will start at 6.4 inches, with the upper model inching ever closer to 7 inches. Usability has basically gotten lost in the race to be biggest, and there’s no signs of it slowing down. If anything, with the advent of folding tech, phones are going to push further into mini tablet territory.

Folding phones might still be novel and interesting, but we’re a long way from mainstream use. The Galaxy Z Flip is certainly a big step in the right direction, but with so-so cameras, nascent UIs, and uncertain form factors, foldables are still in the experimental phase and likely will be for a while.

But even if foldable phones were to magically become durable and affordable, the only real problem they solve is pocketability. When you want to use the Galaxy Fold, you’re still stuck with a giant screen, and if anything, folded phones will quickly get just as big as today’s non-folding handsets. This brings us to a crossroads: There’s only so much bezel that can be trimmed, and if phone screens keep increasing in size, we’re going to be looking at Galaxy Tab A-sized screens in just a couple more years, folding or not.

And it’s all a big distraction from the truth: smartphone evolution has stalled. Folding displays and space-zoom cameras aside, we’ve at something of a lull in smartphone innovation, even as displays have gotten bigger. I’ll admit that Samsung’s Galaxy S20 120Hz panels are downright remarkable, but brightness and speed aside, my Galaxy S9’s display is plenty good. As we all wait for the next big breakthrough, whether it’s folding screens, everlasting batteries, or next-gen AI, phone makers are trying to convince us that bigger screens are the main thing we need, and power users will work harder and smarter with more pixels.

And as a result, small phones have gotten short shrift. Phone makers have reserved some features for its biggest phones due to space and battery limitations, but now, even 6.2-inch phones are missing out on features in their larger-screener counterparts, whether that’s better screens, faster connectivity, or more powerful cameras.

Phones used to have so many new features people wanted to upgrade every year, but with the push into more screen, people are holding onto their phones longer. Part of the reason is the price, of course, but that’s merely a consequence, not the cause. The larger issue is that phone makers are reserving their best features for phones with the biggest screens, essentially forcing consumers to buy more phone than they might want.

So they’re waiting, which only leads to bigger phones. Phone makers are in such a race to one-up each other that none of them seem to be thinking about what can actually make them better. And a 7-inch display isn’t it.