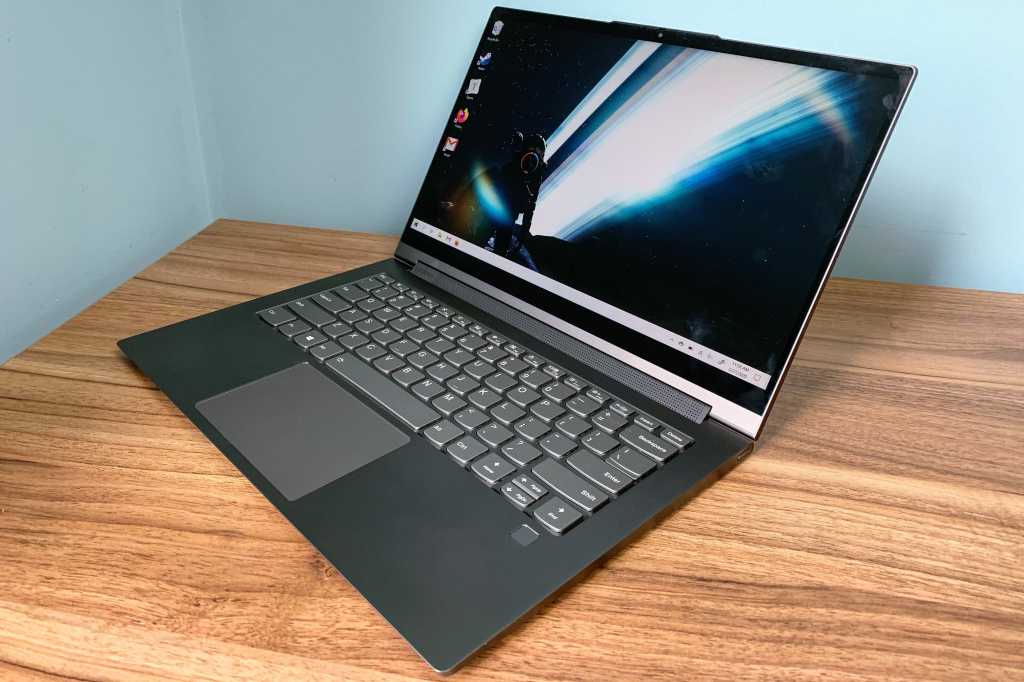 Lenovo’s Yoga C940 14 is a 2-in-1 convertible laptop with a good-sized screen, snappy keyboard, and all-day battery life, all of which help it stand out among more famous ultraportable 2-in-1s.

Lenovo’s C940 Yoga 14 just might be the laptop Goldilocks would pick if she found it in the Three Bears’ house. It’s neither too much nor too little of what most people need in a 2-in-1 convertible laptop—it’s just right.

Think about other popular convertible 2-in-1 laptops playing in this space, such as HP’s Spectre x360 13t, or Dell’s XPS 13 2-in-1. The Yoga C940 14 has the bigger display size compared to either, obviously, but it still stays just under the 3-pound mark that suddenly makes a laptop more of a luggable (and don’t even ask about the weight of most 15-inch convertibles). It doesn’t sacrifice keyboard travel in pursuit of thinness, and its speakers aren’t godawful like those of the LG Gram 2-in-1. It even has a holster for its included stylus.

Of course, even Goldilocks had character flaws—sneaking into a house and messing with everyone’s stuff is fundamentally not cool—and so does the C940 Yoga 14. The port selection is on the skimpy side, the trackpad is too rigid, and the display, while vibrant, is highly reflective. But if you’re looking for a convertible that makes no major sacrifices, the C940 Yoga 14 is well worth considering.

Our Lenovo Yoga C940 Yoga 14, which we purchased, lists for $1,430 from the Microsoft Store and has the following specs:

The same configuration is also available for $1,300 at Best BuyRemove non-product link.

The only glaring tech spec issue is the port arrangement. Every USB port is on the left side, so you can’t plug in the included USB-C charger from either direction, and there’s no MicroSD card slot.

Also note that the Lenovo C940 Yoga 14 isn’t really upgradable. The RAM is soldered to the motherboard, the bottom panel is held in place with T5 Torx screws, and the rear rubber foot (which hides a few of those screws) is glued on. You might be able to pry the laptop open for a battery replacement, but only as a last resort.

Lenovo has a knack for designs that are unique without being excessively gaudy, and that’s also the case with the C940 Yoga 14. The case is aluminum throughout, with no discernible flex anywhere along the bottom portion. The off-center placement of the lid’s etched “Yoga” logo helps give the laptop a monolithic look. It’s available in either a deep “Iron Gray,” or a lighter, silvery gray that Lenovo calls “Mica.”

The design includes a couple of clever flourishes as well: While the laptop’s lid juts out at an angle when closed, the center portion faces straight down to form an extra lip, which both houses the webcam and gives your thumb a place to lift up the screen. Lenovo also built the speaker grille into the laptop’s hinge, allowing sound to project outward even when the Yoga is folded around into tablet mode.

Lenovo went with a 16:9 aspect ratio for the C940 Yoga 14, which for web browsing and document editing isn’t quite as practical as the taller 16:10 ratio found on the MacBook Air and Dell’s XPS 13 2-in-1. Having the extra space of a 14-inch screen helps mitigate this, but the larger the screen gets, the more you’re going to notice individual pixels. Compared to 13-inch laptops, the Yoga 14’s 1080p panel doesn’t look quite as sharp.

It is plenty bright, through, with an advertised peak brightness of 400 nits for the 1080p version and 500 nits on the 4K HDR panel. (We actually measured an even higher than advertised brightness of 463 nits, but display brightness can vary by panel and we set a mid-range brightness of 250-260 nits for all laptop battery testing.). You’ll have no problem using the Lenovo C940 Yoga 14 opposite a sunlit window or outdoors, though the glass touchscreen does create a lot of glare if it’s angled straight at a light source.

Just one nitpick here: Out of the box, the display seemed overly cool and somewhat harsh, while also looking undersaturated. If this is something you’d notice, you can fiddle with Intel’s Graphics Control Panel or even install an alternative ICM color profile, but that’s obviously not ideal.

While Lenovo’s ThinkPads tend to get all the keyboard credit, its consumer laptops often hold their own without being so aggressively chunky. And if you like a keyboard that’s a little on the louder side, you might be smitten with that of the C940 Yoga 14. These shield-shaped keys are not mushy at all, with a strong tactile bump that kicks in immediately as you press them. They give off a faintly high-pitched pop on the way back up.

The trackpad is also top-notch in terms of smoothness—another example of where a 14-inch laptop can excel over 13-inch ones. As the latter are becoming more compact, their trackpads are becoming cramped vertically, as is the case with HP’s latest Spectre x360 13t. The only downside with the C940 Yoga 14’s trackpad is one that many Windows laptops share: As your finger moves upward, the click mechanism becomes uncomfortably rigid, and clicking at the very top is almost impossible.

Windows laptops often have terrible speakers, but the Lenovo Yoga C940 14 doesn’t. That speaker grille built into the laptop’s hinge puts out surprisingly balanced audio, making it one of the rare PCs that sounds better than my iPad Pro from 2017. It’s still not going to replace a dedicated speaker for music, but it does a decent job in a pinch, and it’s great for watching videos on Netflix or YouTube.

The Yoga C940 14’s webcam isn’t nearly as exemplary, with the same 720p resolution you’ll find on practically every other Windows laptop. It does, however, include a nifty privacy shutter, which shows a red dot over the camera when you slide it into place. The camera doesn’t support face recognition for Windows Hello, but there is a fingerprint reader underneath the keyboard, and it’s fast and accurate enough.

The Lenovo Yoga C940 14 launched late last fall among the first wave of laptops using Intel’s 10th-generation Ice Lake processors. In many ways, Ice Lake is tailor-made for convertibles, allowing them to shrink down in size without sacrificing performance or battery life, while upgrades to Intel’s Iris Pro integrated graphics provide a boost for light gaming.

Benchmark testing bears this out. While the Yoga C940 14 is slightly behind some of its convertible competitors in raw performance, it’s a clear cut above last year’s 2-in-1 laptops and offers excellent battery life.

In PCMark’s Work 2.0 benchmark, which simulates a gamut of productivity tasks, the Yoga C940 14 didn’t score as well as Dell’s XPS 13 2-in-1 or HP’s Spectre x360 13t, both of which use the same Intel Core i7-1065G7 processor. Still, performance is in line with expectations, beating out Intel’s 10th-generation Core i5 processors and last year’s 8th-gen chips.

Our HandBrake test uses the popular free utility to encode a large video file, a good way to stress a CPU. As with the PCMark 8 test, The Yoga C940 14 didn’t get the job done as quickly as the XPS 13 did—or the Ryzen 5-powered Walmart Motile M142, for that matter—but it’s way ahead of laptops with weaker chips. (The MSI Prestige 14’s excellent performance seems like an anomaly here.)

Cinebench results are slightly murkier, if only because Dell’s XPS 13 and MSI’s Prestige 14 really stand out on multi-threaded performance. One theory: Based on actual use, the Yoga C940 runs cool and quiet nearly all the time, kicking its fans into high gear only under extremely heavy workloads. Given that Cinebench tests short, bursty performance, Lenovo may be slightly more reserved about cranking its CPU so quickly.

While the Lenovo Yoga C940 14 is not a gaming machine, Intel’s Iris Plus graphics improvements in 10th-gen CPUs do make a clear difference. As with other thin-and-light laptops, you can play 2D indie games and older games on this machine without issue. I was also able to get a passable experience in the 3D shooter Deep Rock Galactic at 720p resolution with medium-to-low settings, which made me very happy.

Last but not least, there’s battery life, where the Lenovo Yoga C940 14 really shines. Our rundown test involves charging the battery to full, setting the display to 250 nits’ brightness and and connecting earbuds at medium volume, then looping a video offline. The HP Spectre x360 13t continues to lead strongly, as it has in previous generations, but the Yoga’s 60Whr battery at least holds its own with roughly 13 hours.

The Lenovo Yoga C940 14’s battery life ties into a broader theme: This laptop isn’t a leader in any particular category—except perhaps audio quality—and it doesn’t introduce any wild new ideas. But with a bright 14-inch display, strong battery life, and a great keyboard, it’s solid in all the ways you’d want a premium 2-in-1 laptop to be.