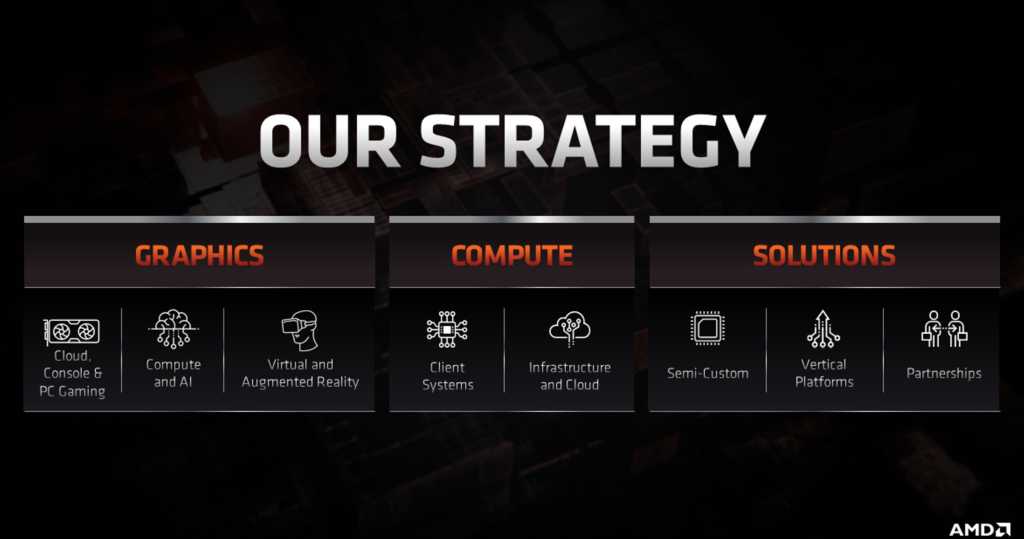 AMD confirmed Thursday that its next-generation RDNA 2 graphics architecture will be its first to include hardware ray tracing, and that it will advance performance-per-watt improvements by an additional 50 percent over its current designs. The company also plans to add a compute-specific version of its GPUs, dubbed “CDNA.”

AMD has traditionally used its financial analyst meetings to provide insight into its future strategy in the CPU and GPU markets, especially with regard to the PC, mobile, and server spaces. It’s the latter market in which AMD is driving hard, as enterprise and scientific markets are willing to pay top dollar for a high-margin Epyc processor—the sort of boon financial analysts like to hear about.

AMD habitually offers more insight into its server roadmaps as a way of building credibility with customers, chief marketing officer John Taylor said in advance of the call. In this case, however, the company is sharing details on key technologies that will benefit the PC as well as other segments: a new “X3D” packaging technology that will complement its existing “chiplet” designs; a “CDNA” compute-intensive version of its GPUs; and RDNA 2 and 3, the evolution of the “Navi” GPU architecture that should include hardware ray tracing.

Lisa Su, AMD’s chief executive officer, began by noting that, first and foremost, AMD is playing to its strengths: high performance in graphics, CPU, and solutions that include the two. “This is the fundamental DNA of our company,” she said.

AMD’s Ryzen investments are paying off

Over the next five years, AMD will continue to build upon its Zen roadmap, its RDNA architecture, and 7nm and future process technologies. AMD changed the game with Ryzen, and it’s paid off, Su said: Fully half of premium desktop PCs use Ryzen, and it’s consistently gained share over the last few quarters. AMD also continues to invest in graphics, exclusively supplying the Apple Macintosh, and shipping over 150 million units in the game console business since 2013. But, Su added, AMD is still “underrepresented” in the PC market.

Now, AMD is looking for new ways to leverage the technology it already has in house. “We actually see more opportunities to combine our CPU and GPU solutions,” Su added. AMD has used techniques such as “chiplets” to improve the flexibility of its processor and graphics design. AMD will have to build on those with new packaging and interconnect techniques to keep pushing performance forward, Su said.

Su was so confident that the company can make it happen that AMD now predicts that it can deliver 20-percent compound annual growth in revenue over the next four years—aggressive numbers for a company that was struggling just a decade ago.

What’s next? Zen 4 and 5nm processors

According to Mark Papermaster, AMD’s chief technical officer and executive vice president of technology and engineering, in each of the product segments AMD serves, there’s a common thread: incredible amounts of compute power.

Papermaster noted that AMD has now switched to a “chiplet” architecture, where various products are developed as modular parts that can be fitted together. A modular approach didn’t just change the design of AMD’s products, it changed the company culture—it forced various teams at AMD to work together, Papermaster said. Likewise, it made validation simpler, allowing AMD engineers to determine whether chips were viable in hours, not days. “This is the new normal at AMD,” he said.

As an example, Papermaster said that AMD developed a single NUMA domain within its Epyc chips, organizing 7nm CPU cores and connecting them with a 12nm Infinity Fabric I/O.

Papermaster said that AMD is planning to bring “Zen 4” and 5nm processors into the market by 2022, without specifying which markets would be addressed first. (Taylor indicated that AMD’s rollout strategy isn’t expected to change: server first, then desktop, then mobile, with all rolled out by the end of 2022.) Papermaster also said that he expects AMD’s chief competitor, Intel, will solve its manufacturing problems and accelerate its manufacturing technology.

“Once you have that level playing field, it is about how you put these solutions together,” Papermaster said.

The X3D packaging technique will be used to combine chiplets and 3D stacking, all connected with its Infinity Fabric architecture. That Infinity Architecture will also improve, with 3rd-gen products rolling out by 2022 with up to 8-way GPU and coherent connectivity. “What does this mean with these types of improvements? Look at machine learning…they demand this type of connectivity,” Papermaster said.

Perhaps the most significant news of AMD’s financial meeting was the fact that AMD would be moving from a single GPU architecture to multiple, domain-specific architectures. Related and also significant will be the long-awaited release of hardware ray-tracing within the upcoming RDNA 2 GPU architecture.

AMD is developing specific versions of the architectures for different markets, such as the data center, because it’s become increasingly difficult to develop a general GPU architecture as Moore’s Law slows down, said David Wang, senior vice president of the Radeon Technologies Group at AMD.

AMD’s PC GPU architecture is known as RDNA, and it’s been the foundation of recent Radeon cards. Before the end of the year, however, AMD will ship RDNA 2 cards, which—hurray!—will include hardware ray tracing, optimized both for the game consoles based upon the RDNA 2 architecture as well as PCs. AMD sometimes referrs to RDNA 2 as Navi 2X, with Navi 3X to follow. (The rumored “Big Navi” codename wasn’t used.) AMD already delivered a 50 percent performance-per-watt improvement with its first-generation “Navi” GPU—now it’s aiming to do it again with the upcoming Navi 2X. That’s crazy!

As for the data center, AMD’s plan is to design a compute-specific version of RDNA, also known as compute DNA, or CDNA. CDNA will be scalable for multi-GPU for exascale computing and machine learning. AMD also confirmed CDNA 2, with the 3rd-generation AMD Infinity Fabric Architecture.

“This is a good move as datacenter GPUs don’t need many of the features a consumer graphics card needs,” said Patrick Moorhead, principal analyst at Moor Research, in an email. “[CDNA] includes elements like display and pixel rendering engines, and ray tracing. This means AMD can save cost by removing those elements and add more gates that help datacenter performance like tensor OPS. AMD hadn’t done it until today because it couldn’t afford to have two architectures. I believe AMD can field a high performance datacenter GPU, but it will need to invest at least as much in software to complete the solution.”

What it all means for the PC

AMD created an “execution machine” in processors, did the same with GPUs, and combined the two into an APU. Now, there’s a $32 billion PC market waiting for what’s next, said Rick Bergman, executive vice president of Computing and Graphics for AMD. Before the end of the year, we’ll know: the fourth-generation Ryzen processor.

Having secured desktop PC share of about 17 percent, AMD also has its eye trained on the mobile space, with its mobile Ryzen chips aimed squarely at the notebook space and especially commercial PCs. A key technology is Modern Standby, with five times the number of laptops now supporting the technology versus the prior generation, Bergman said. AMD is also claiming that versions of the 3rd-gen mobile Ryzen will deliver up to 18 hours of battery life. (That number typically varies quite a bit in the real world.)

Bergman said that AMD has already secured more than 70 designs in the commercial PC space, and that’s before Ryzen Mobile or the related Ryzen Mobile Pro debuted. “We’re expecting a lot more,” he said.

In a surprise, Bergman showed off a slide indicating that 4th-generation Ryzen chips would begin to ship before the end of 2020, just a few months after the expected ship date of 3rd-gen mobile Ryzen parts. (PCWorld asked for more specifics about which 4th-generation products would ship first, but AMD did not comment further.) That’s not all: AMD will ship its next the next-generation RDNA 2 cards before the end of the year, “with uncompromised 4K performance,” Bergman said. These will be the first cards with hardware based ray tracing and variable-rate shading, he added.

Granted, AMD is revealing scant detail about its Zen 2/RDNA 2 cards, its next-gen fourth-gen Ryzen processor, or anything else. But we know they’re coming, and AMD will fill in the blanks as we get closer.