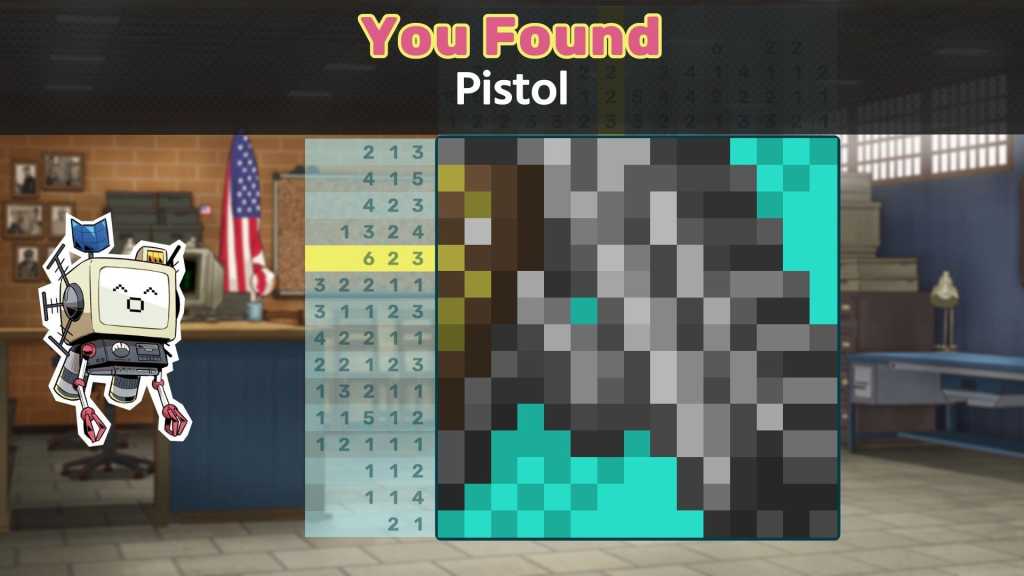 Murder by Numbers is a unique blend of police procedural and Picross puzzling that will keep you solving crimes for far longer than you intended.

Imagine, you’ve come down to the final reveal in A Study in Scarlet. The famed Sherlock Holmes stands in the room where the murder happened, all eyes awaiting his recounting of events. “A-ha, it’s elementary, my dear Watson,” says Holmes. “I know who killed Joseph Stangerson, and more importantly, how they did it. It was Jefferson Hope, and he did it with this!”

And then he waves the pivotal piece of evidence in the air: A book of picross puzzles, and the one Holmes just solved vaguely resembles a bloodied knife. The crowd gasps. “Book him, Lestrade.”

Another case closed, all thanks to my Picross skills. What a wonderful world that would be.

Every breath you take

Murder by Numbers was made for me. I only love two things in this world, and that’s detective procedurals and Picross. Combine both, throw in a kick-ass soundtrack, and you have my attention.

Ah, the soundtrack. Rarely do I start with that aspect, but I have to here. Every time I’ve loaded up Murder by Numbers I’ve watched the intro cinematic. Every time. Designed to resemble a Saturday morning cartoon, the theme absolutely slaps. The instrumental is upbeat and catchy, the lyrics are about omnipresent murder, and that dichotomy captures what this game is all about. Play Picross! Solve grisly crimes! Chuckle at a few bad puns!

You play as Honor, an actor on the show Murder Miss Terri. (I told you there were puns.) Honor’s fake detective job becomes very real when the showrunner turns up dead. Initially accused of the crime, Honor sets out to clear her own name and find the person responsible.

She does so with (quite a lot of) help from S.C.O.U.T., or Scout, a robot that resembles a flying CRT monitor, complete with that terrible yellow-beige plastic every machine used in the ‘90s. Honor is responsible for talking to suspects, while Scout looks for clues and analyzes the evidence.

The latter is done by “scanning” the environment, a la Ace Attorney. This is by far the least engaging part of Murder by Numbers, though it’s certainly a faithful homage. You kind-of wiggle your mouse around the screen until a flashing red light indicates you’re at the right spot. You aren’t really hunting for visible evidence, which is a shame.

That said, Ace Attorney is even less satisfying because finding evidence means it simply appears in your inventory. Here, the conceit is that Scout needs to calibrate his scanner to recognize an object before it can be catalogued, and calibration takes the form of Picross.

It never got old, at least for me. I could play Picross all damn day, and Murder by Numbers is satisfying because it contextualizes the puzzles you’re solving. Filling in the last few squares means revealing that Honor and Scout discovered a gun, or a bloody footprint, or a CCTV tape. All kinds of objects you’d never see in a traditional Picross game like Pictopix.

Hell, the first puzzle you solve is a sight gag. I don’t want to spoil it, but when Scout revealed the object he’d mistaken as Honor’s keys, I quite literally laughed out loud. I love Pictopix, but I don’t think that’s ever happened before.

Solutions-in-progress rarely resemble what you’re shown afterward, a binary black-and-white image changing to a more granular full-color one, but that’s okay. It’s more important that the puzzles provide a decent challenge, and the evidence (once revealed) serves the story being told. Both parts work in concert to bolster the other.

My only real complaint with the Picross side of Murder by Numbers is the difficulty plateaus very early. By the end of the first case you’re solving 15×10 grids, and midway through the second you move to 15×15. Then it stays there for the rest of the game, four cases in total, with a single 15×20 puzzle at the very end to serve as the “final boss,” so to speak.

This is a problem with most multiplatform Picross games, to be fair. Forced to accommodate controllers and smaller (or more distant) screens, a lot of them top out around 15×15. I found myself wishing for 20×20 or even 25×25 grids by the end though, both for the variety and the challenge. I don’t need Pictopix’s absurd 40×40 puzzles in Murder by Numbers because it’s not that type of game, but the game doesn’t evolve much after the first eight hours.

Still, it’s a neat way to present Picross. Pictopix perfected the “Random collection of puzzles” model on PC, especially given its Steam Workshop support. Given its success, a story-driven wrapper like Murder by Numbers is one way—maybe the only way—to get my attention.

And it tells a decent story, as well. Murder by Numbers isn’t really a “detective” game, insofar as the story plays out on rails. Rarely, it asks you to deduce a fact about the case with the evidence given, but there’s no penalty for failure. As far as I can tell, coming to the wrong conclusion only entails a quick reprimand from Honor’s companions, and then you’re instructed to pick a different option.

In any case, you probably won’t fail. Not much anyway. Honor’s role in the case is pretty simplistic, guiding the player to the right (or sometimes intentionally wrong) conclusions. Evidence is doled out so slowly, you never really have a sense of the case until it’s over.

This allows for plenty of twists and turns to sustain the action. False accusations and red herrings abound, which keeps the pace driving forward. But it’s less a detective game (like Lamplight City or Frogwares’ Sherlock Holmes series) and more a game about detectives, if that makes sense.

On that front, it’s pretty successful. Not all of the jokes and references land, and the tone can be weirdly inconsistent. There’s a certain subplot concerning Honor’s ex-husband that seems particularly out-of-step with the rest of the writing, a very serious topic at-odds with this whimsical world of flying robots and impromptu detective work. The cases are compelling though, and the characters memorable. Murder by Numbers is a game where I suspect everyone will gravitate towards a favorite character, and everyone’s favorite will be different, which I think speaks to the writing’s strengths.

To some extent I feel as if I’m grading on a curve, because really I consider the story in Murder by Numbers a vehicle for Picross. Would I have played it without that aspect? Probably not. I’m not big on visual novels, and I doubt Honor’s story (however charming) would’ve held my attention. Still, it provided enough structure to keep me entertained and invested in between puzzles, and I found myself playing Murder by Numbers way longer than intended. I’d sit down to solve one puzzle, then do one more, and one more, and then I’d look up to find three hours had passed, we had a flask and a tabloid magazine in-hand, and the killer was still on the loose.

Listen, if somebody tied Picross into Assassin’s Creed or Destiny 2 or some other games-as-a-service venture, I’d be doomed. I can’t stop playing Picross. They’d find me dead, having wasted away solving just ooooone more puzzle. Then they’d call in the detectives, and this would all come full circle.

Murder by Numbers isn’t perfect, but I thoroughly enjoyed my time with it and hope there’s a sequel. Honor, Scout, Detective Cross, and the gang deserve a second outing, ideally with more of a focus on the detective work—and perhaps a few headache-inducing 25×25 Picross puzzles as well.

And until then, well, there’s still Pictopix.