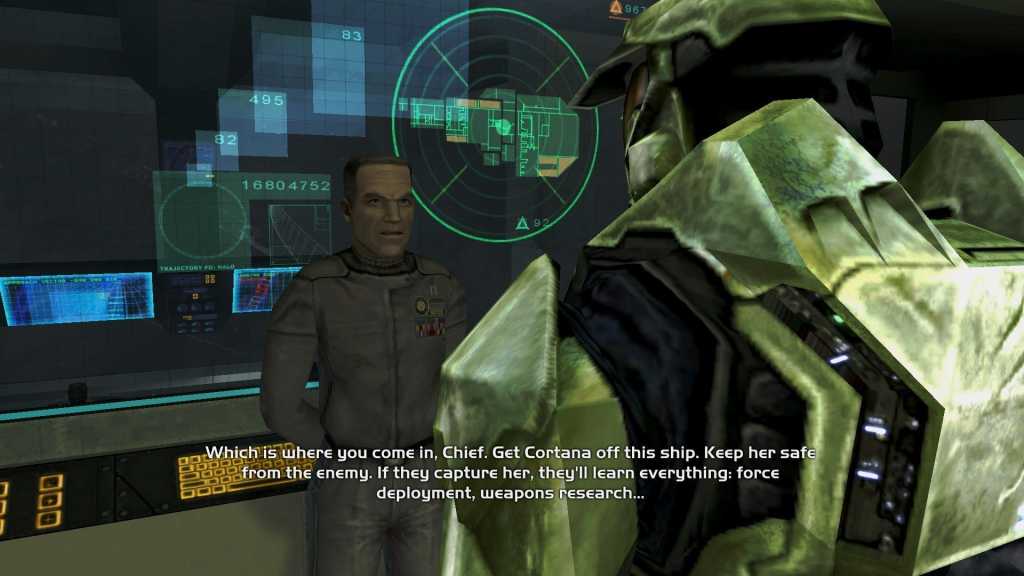 Aaaah, now this is Halo. Three months after releasing Halo: Reach on PC, Microsoft surprise-added Halo: Combat Evolved to Steam yesterday—both standalone and as part of the Master Chief Collection. Unlike Reach, the original Halo had its day on PC back in 2003. This is the Anniversary edition though, the remaster from 2011.

And you know what? It still holds up surprisingly well—visually, at least.

Playing the game? That’s a different story. The original Halo’s an interesting one, missing key features that came to define the series later. Regenerating health, for instance. You still have a shield in Halo: Combat Evolved but it’s a flimsy one, and you collect a lot of Red Cross-emblazoned medkits off the floors here. It wasn’t until Halo 2 that Bungie settled on the idea of only having regenerating shield health, a decision that influenced shooters for over a decade after.

And if you’ve played Halo: Combat Evolved before, you doubtless know the starting Pistol is the only gun worth using. Fan-favorite weapons like the battle rifle and sword don’t exist here, and the rest of the roster is either highly situational or near-useless. The Assault Rifle is equivalent to sneezing on most enemies. Meanwhile the humble Pistol has a 2x zoom and can one-shot through the Covenant with ease.

It has rough edges, and a lot of them. Voice acting is passable, but pretty rough circa 2020. The tutorial is loooooong. Level design is dated, with an over-reliance on labyrinthine corridors, especially in the infamous Library level. Even the once-impressive outdoor levels feel small and stilted by today’s standards. It’s very much a game that tried a lot of interesting ideas, but with one foot still stuck in the ‘90s.

Still, it’s the Halo campaign I’m most nostalgic to boot up. I associate the Halos that came after with multiplayer, primarily. Sure, I played every campaign, but I finished Halo 2 maybe twice and spent the rest of my time with it (hundreds of hours as a teenager) on Xbox Live. There, I’m nostalgic for Lockout, Ascension, Zanzibar, all the time I wasted in those iconic arenas. Halo 3, it’s the same. I finished once on Heroic, once on Legendary, and then never went back.

But I barely played the original Halo’s multiplayer at the time—only ever in splitscreen, and only with two people. Instead, my buddy and I spent a lot of time playing and replaying the Combat Evolved campaign. I can picture it, every step of the way: The winding corridors of the Pillar of Autumn, those first cautious steps onto the Halo installation, the beaches of the Silent Cartographer, the arrival of The Flood, the fate of Commander Keyes (and his pipe), the Warthog run.

We spent hours perfecting the Warthog Jump, and stealing Banshees to get to parts of the level we weren’t supposed to see. We mined the levels for secrets, like the hidden room on the Pillar of Autumn.

It’s a landmark game for me. I think you generally only get a few of those in your life, and most of them come when you’re young and your access to games is limited. I wrote about this a bit with Warcraft III, another from around that same time. Halo: Combat Evolved is more than a game I once played. It’s emblematic of a time and a place. I can picture the room my friend and I used to sit in, the couch we used to sit on, the crappy 14-inch TV we squinted at when a fight went sideways.

I play Halo not so much to relive the campaign but to relive those memories. They come flooding (heh) back as soon as I take my first steps on the Pillar of Autumn, and so while I think this is objectively one of the weakest parts of the Master Chief Collection—seriously, it’s showing its age—I have to admit it’s also probably my favorite. Or at least tied for my favorite with Halo 2’s multiplayer.

You probably had to be there, but I was there, and my friends were there, and we had one hell of a summer.

And now it’s easier for me to boot up Halo on a whim. That’s the promise of the Master Chief Collection, and I’m pretty impressed with it so far…with a few caveats.

My complaints about the original Halo are identical to my complaints about Reach. First and foremost, the bizarre manner in which weapon switching is handled. Mirroring the Xbox controls, swapping between primary and secondary weapons is done with a single mapping, the “1” key. Hitting “2” to go to your secondary instead changes your grenade type.

It’s been three months, and it still irks me. This is not how PC games handle weapon swapping. I’ve adapted to a lot of strange control schemes in my life, but this one flies in the face of PC shooters both before (i.e. Doom-era) and after. It’s an aberration, and I wish 343 would simply give PC players the option to use the scroll wheel, or map “1” to primary weapon, “2” to secondary, and “3” to swapping grenades. The option, is all!

Speaking of which, Halo sports the same three options as Reach: “Enhanced,” “Original,” and “Performance.” As with Reach, any halfway decent gaming PC will run Halo maxed out, so I understand logically why 343 didn’t bother with more granular graphics settings—and yet I find it weird. It’s a PC port. Where is my list of settings to set to “Ultra” so I can feel smug?

There are a few Halo-specific bugs I’ve noticed. Cortana has a bad habit of talking over herself if you progress through a level too fast (which is easy to do on Pillar of Autumn especially). Shadows don’t render correctly sometimes.

And you can still toggle between the original graphics and the updated Anniversary edition remaster by hitting Tab—an ingenious feature, which will prompt anyone who played the game in the early ‘00s to sputter “There’s no way it looked this bad back then.” Time makes fools of us all.

Unfortunately the jump back and forth is nowhere near as smooth as it was on Xbox—at least on my PC. If it’s been a minute or two since I last switched, the first new instance causes the game to stutter and hang for a second before flipping over. After that it’s fine, as I assume all the old (or new) textures get loaded properly into memory. Still, it’s not quite as seamless as I’d like. Also, there’s some ill-advised 2011 meme humor embedded in the Anniversary graphics that I wish was stricken from the game.

There’s also a “bug” that’s actually a feature: Control settings are per-game. They don’t carry across the entire Master Chief Collection. If you remapped melee to Mouse 4 or weapon switching to Mouse Wheel Up last time (as I recommended), you’ll have to do it again here.

Annoying? Maybe, but also kind of neat, I’ll admit. The Master Chief Collection is smart about how it packages and presents the series, and unique per-game controls are emblematic of 343’s mostly hands-off approach. You can also pick-and-choose which Halos you want to install from an in-game menu, and each entry is further split into singleplayer and multiplayer components.

Snag the ones you plan to play and don’t bother downloading the rest. I wish more games were this kind to my hard drive.

Anyway, it’s Halo on PC—again. That’s going to be the takeaway for all of these, and at some point I’ll probably stop writing up every single release in the Master Chief Collection.

But for now, I still find it exciting. The PC went nearly 15 years without a Halo game. Now they’re all coming over at once, and that makes them infinitely more accessible than they were on my Xbox One, which is in a box in my closet. Master Chief Collection was one of two Microsoft games (along with Rare Replay) this generation that I wanted to come over, and now it’s happening. That’s worth celebrating, at least one or two more times.