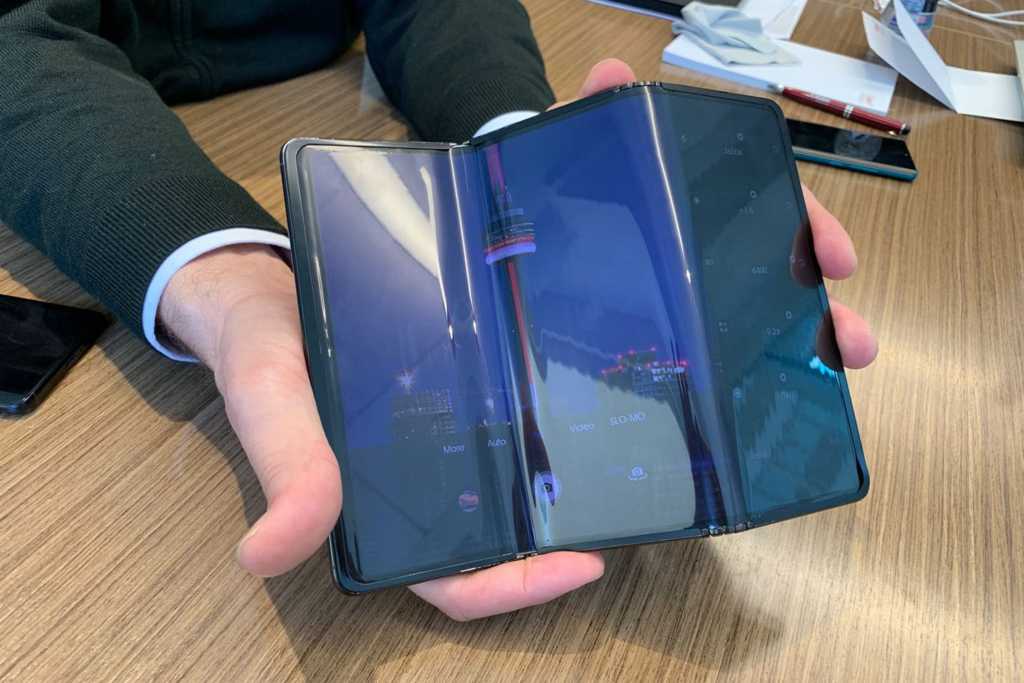 TCL isn’t exactly a household name when it comes to smartphones, but the BlackBerry and Palm phone maker is looking to change that in 2020. Ahead of the launch of its own phones later this year, TCL is piquing our curiosity with a couple of wild concept phones that make the Samsung Galaxy Z Flip and Motorola razr look like old news.

To be clear, these are concepts in every sense of the word. They have no names, no specs, and no chance of being sold anytime soon. The models we saw were basically movie props with few working parts, but they’re certainly intriguing. And if they’re an indication of what TCL has in store for future phones, it won’t be an unknown name for very long.

While we’re somewhat accustomed to folding screens at this point, TCL doesn’t think simply folding in half is enough. To be fair, the company does have a single-folding phone in development that folds completely flat with “zero gap,” but TCL is staking its reputation on two moonshots: a tri-fold display that opens like an accordion and a rollable display that slides out like sideways windows blinds.

If it can actually be mass-produced at a reasonable price, the rollable display could be a game-changer. The idea is that most of the time, the phone looks like any of today’s smartphones, but behind its 6.7-inch display is another inch-plus of display stored around the backs and rolls out to expand to 7.8 inches. The mechanism is powered by “a very simple pushrod motor that works with gesture controls,” and even seeing it in action without a working motor or screen, it was kind of magical.

It’s very much a now-you-see-it-now-you-don’t kind of thing and it presents a unique new direction for foldables that solved the biggest issue: the hinge crease. Of course, it raises numerous interface and multitasking questions that TCL isn’t prepared to demonstrate just yet, but it contends that extending display is easier “from a UI/UX perspective” than folding the display. “Because you’re not taking the screen and then holding it this way or holding it this way, but you’re just extending,” TCL said, “so it’s keeping a standard aspect ratio, kind of like when you do a screen share from your computer.”

Three for the show

If TCL’s rollable phone is “standard,” however, its tri-fold tablet is anything but. TCL has combined two different hinges to create a display that unfolds like a pamphlet, with three panels becoming one. The demo unit we saw technically worked, but like the rollable phone, it was far from a finished product. TCL’s vision is to once again turn a normal-sized 6.5-inch phone into a 10-inch tablet. To accomplish the dual-fold, TCL uses two different hinge technologies, Dragon Hinge and Butterfly Hinge, to “ensure smooth folding inside and out with a minimal gap.”

When closed, the tri-fold phone is quite thick and the whole package was very heavy and clunky. The screens looked and felt like plastic, and the mechanism was creaky. In all honesty, it felt a lot like Royale’s early Flexpai prototype. But TCL wasn’t showing off a polished phone. It’s all about the potential of what a smartphone display can be. When TCL launches its first phones later this year, they’ll look much more like traditional handsets, but down the line, TCL is hoping to become an innovator in the smartphone space with its outside-the-box displays.

And it might be able to do it. For years, TCL has made some of the best budget TV sets in the business, including a partnership with Roku, as well as the BlackBerry Key2 and tiny Palm phones. But with these displays, it’s looking to combine innovation with aggressive pricing to give Android fans another option in an ever-shrinking field.

Of course, interesting ideas don’t necessarily translate into building a good smartphone, and the prototypes we saw gave little indication of how—or if—they’ll work, so we’ll have to wait and see how TCL’s first devices stack up to their peers. But if TCL’s concepts are any indication, we’re in for a wild ride.

Ben Patterson contributed to this report.