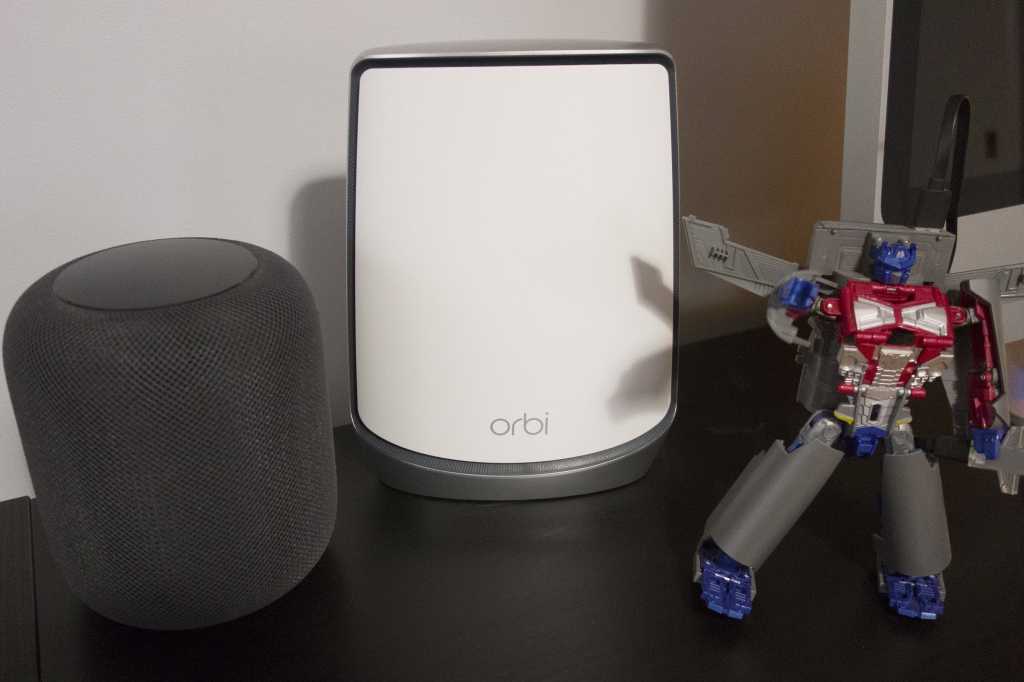 As a long-time freelancer and work-from-homer, I’ve owned a lot of routers in my quest for the speediest and most pervasive possible Wi-Fi. I had the original Apple Airport, followed by the AirPort Extreme, the Linksys WRT3200ACM, and most recently, the Netgear Orbi RBK50.

Update 3/25: Newegg is selling the Orbi WiFi 6 router for $550 todayRemove non-product link, taking $150 off the MSRP with code 3FNMDS36. This version is slightly better than the model I own and wrote about here, with 1.2Gbps of bandwidth on the 2.5Ghz network versus 900Mbps on the Costco model I bought.

Each time I replaced my router, the speeds and coverage boost was measurable but relatively muted. The jump from 801.11n (Wi-Fi 4) to 802.11ac (Wi-Fi 5) was noticeable, but not monumental. And upgrading to a mesh router was easy, but it didn’t deliver a huge leap in coverage over the bridged Airport routers I was using previously (I had configured one Airport as a router, and a second as a range extender). When I wanted a speed boost, I paid for a higher-speed tier from my ISP.

But when I hooked up my new Netgear Orbi Wi-Fi 6 system (specifically, the Costco-exclusive Orbi RBK842-1CCNAS, which set me back $550), it was like going from dial-up to broadband. Yes, it’s an expensive router. And Netgear’s slightly faster Orbi RBK852—available from other retailers—is even pricier. Amazon was selling it for about $700 at this writing. Both models are tri-band mesh systems consisting of a router and one satellite, but the Costco SKU delivers slightly less bandwidth on its 2.4GHz network: 900Mbps vs. 1.2Gbps.

Most of my client devices have dual-band (2.4- and 5GHz) network adapters onboard, and the ones with 2.4GHz-only adapters don’t need high bandwidth, so I’m OK with it. The bottom line is that this Wi-Fi 6 router is worth every penny. And it’s not just because of the easy setup and maintenance. On my porch, where I was barely getting throughput of 20Mbps, I’m now getting around 100Mbps. I even tested it by putting the client in a closet with the door closed and I still topped 100Mbps.

I’ll be honest, I didn’t expect such a boost, as my previous Wi-Fi system was plenty good. I had Netgear’s Orbi RBK40 with an extra satellite, and I had no complaints. Quite frankly, I planned to return the the Wi-Fi 6 system if my benchmarks showed that it wasn’t a lot faster than what I had. Suffice to say, I’m keeping it. For the first time since I’ve been hooking up Wi-Fi routers in my home, I’m confident that I won’t need to replace this system for many years to come, even if I opt to upgrade my internet plan (both Netgear models are equipped with 2.5Gbps WAN ports).

Note that I’m a router hobbyist and not an expert, so I’m using the Speedtest app to measure my connection to the internet. That means the speed between a server and a client on my home network—which is how we more typically benchmark Wi-Fi routers—could be even faster. If you have a slow internet connection, your own Speedtest results might be artificially low, because they can’t be higher than what your ISP is providing.

As with previous generations of Wi-Fi, your client devices will need to have Wi-Fi 6 adapters to squeeze the most benefit from a Wi-Fi 6 router. But I experienced tremendous speed increases even with clients that had older (Wi-Fi 5) adapters onboard. I’m talking doubling—and in some cases—tripling throughput over my local network. My Wi-Fi 6 router enabled me to take much better advantage of the gigabit internet service I’m paying my ISP for.

No matter which of my home’s main rooms I test in, I’m seeing regular speed readings of 500Mbps or more, using the same devices (outfitted with Wi-Fi 5 client adapters) that I did before. For example, my 2016 MacBook Pro, which is the same distance from the satellite in my office as it was before, now returns speeds between 500- and 600Mbps, and I can work way faster in my work CMS. With my old router, I’d get 200Mbps with that laptop on a good day, and around 50Mbps on average. I’m even topping 500Mbps in my bedroom with the door closed, a location without an Orbi satellite, where I got around 150Mbps before.

Max out before you need to

My network’s performance is also much more consistent. Before, my speed tests would vary greatly depending on where I was in my house, or if my son was streaming a video on his iPad. Wi-Fi 6 not only delivers higher speed, it can also handle more wireless clients simultaneously. That means my network isn’t as impacted by things like video streaming or gaming—even if those clients don’t have Wi-Fi 6 adapters. Speeds fluctuate somewhat, but they never dip below 350Mbps or so—which was the peak speed with my Wi-Fi 5 system. And the wired connection (using a CAT6 ethernet cable) to my AppleTV tops out at 900Mbps, about 50-percent higher than the 600Mbps I was getting before and very close to the actual speed I’m paying my ISP for.

As we fill our homes with smart devices—plugs, switches, speakers, bulbs, thermostats, and what have you—Wi-Fi 6’s ability to handle lots of wireless clients at once will become ever more important. I already have 55 wireless clients on my network, so you can plainly see how adept Netgear’s Orbi RBK842 is.

And that’s just the tip of the iceberg. Once everything gets upgraded to Wi-Fi 6, I’m confident that my network clients will absolutely scream. The two Wi-Fi 6-compatible devices that I was able to test—a Samsung Galaxy S10+ and an iPhone 11—blew away the other wireless clients, with speeds greater than 700Mbps when I was near the main router. And I didn’t lose much when I wandered. The slowest speeds I recorded with Wi-Fi 6 clients were still higher than 600Mbps, more than double what I was getting when they were connected to my Wi-Fi 5 Orbi system.

But the biggest reason to plunk down a bunch of dough on a Wi-Fi 6 router isn’t for today’s speeds, devices, and use cases; it’s for tomorrow’s. Even if your ISP can’t deliver gigabit broadband today, a modern home needs a router that can quickly move lots of data from lots of clients inside it. And broadband providers will soon be able to offer very high-speed internet just about anywhere, whether it be via cable, 5G, or some new tech we haven’t thought of. Besides, no one ever complains that something is too fast.

Whether you’re a cord-cutter, a work-from-homer, or a parent with kids who like to stream Fortnite videos over Twitch, your next router should have a Wi-Fi 6 label. I mean, If you’re planning to spend a thousand bucks on your next smartphone anyway, a Wi-Fi 6 router is the best possible fuel for it.