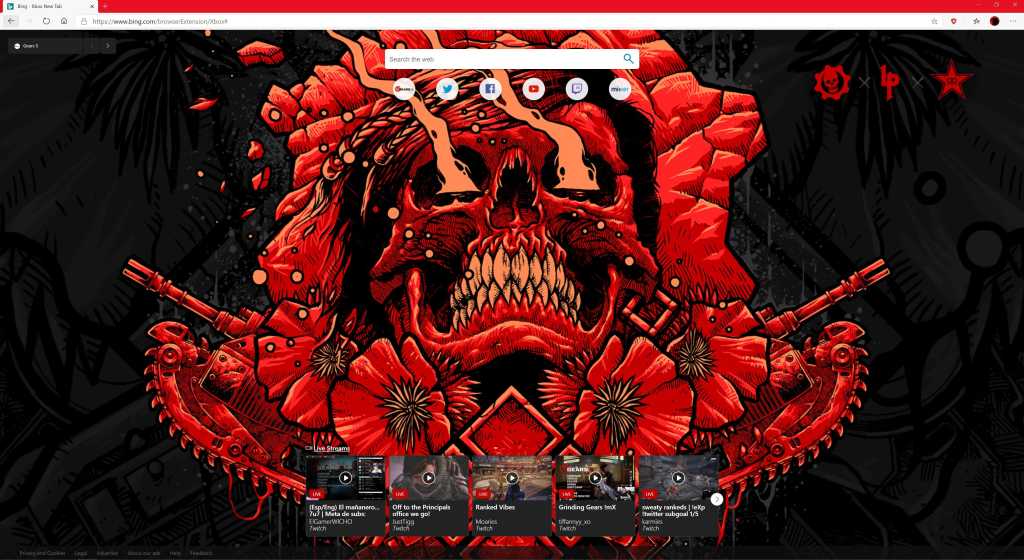 Microsoft has published a new Xbox extension for Microsoft Edge that blurs the lines between working from home and sneaking a peek into your favorite game streams. And hey, who says your web browser can’t have a little fun?

The new Xbox New Tab extension for the new Microsoft Edge alters Edge’s layout schemes from its mix of inspirational and informational new-tab screens to add a fourth option: scenes and art from popular Xbox games, as well as quick links to popular game streams. (Oddly, all of the featured streams that were displayed linked to Twitch, but there’s also a dedicated shortcut to Microsoft’s own Mixer service.)

When you open a new tab using the Xbox extension, you’ll see a massive, game-inspired graphic as the background for the tab, configurable from a small menu in the upper left corner. That menu allows you to choose from popular Xbox games—Age of Empires 2, Gears 5, Forza Horizon 4, and Sea of Thieves, to name just a few—with the ability to step through a few choices of background graphics from each. A large, Bing-powered search box appears at the top of the page.

Under the search box, Microsoft has added links to game-specific content. With the Gears 5 option configured, there were shortcuts to Gears5.com, the Gears of War Twitter feed and Facebook pages, plus dedicated Gears channels on YouTube, Twitch, and Mixer. (The promotional intro that we saw implied that there would be a direct link to Microsoft’s Game Pass service as well, but either Microsoft erroneously published that information or it’s not live at the moment.)

The permissions attached to the Edge extension are broad enough to be slightly intimidating, but they seem to be relatively benign. In the “site access” permissions viewable in the screenshot above, for example, Edge gives the New Xbox Tab extension permission to “Allow this extension to read and change all your data on websites you visit.” In my short experience with using the tab I have yet to see a popup notification, but the extension says you might. Here they are:

Sure, the New Xbox Tab for Edge might not be the most productive extension for Edge that you could add. But if you want (or need) a brief distraction while opening a new tab, this could be just the thing.