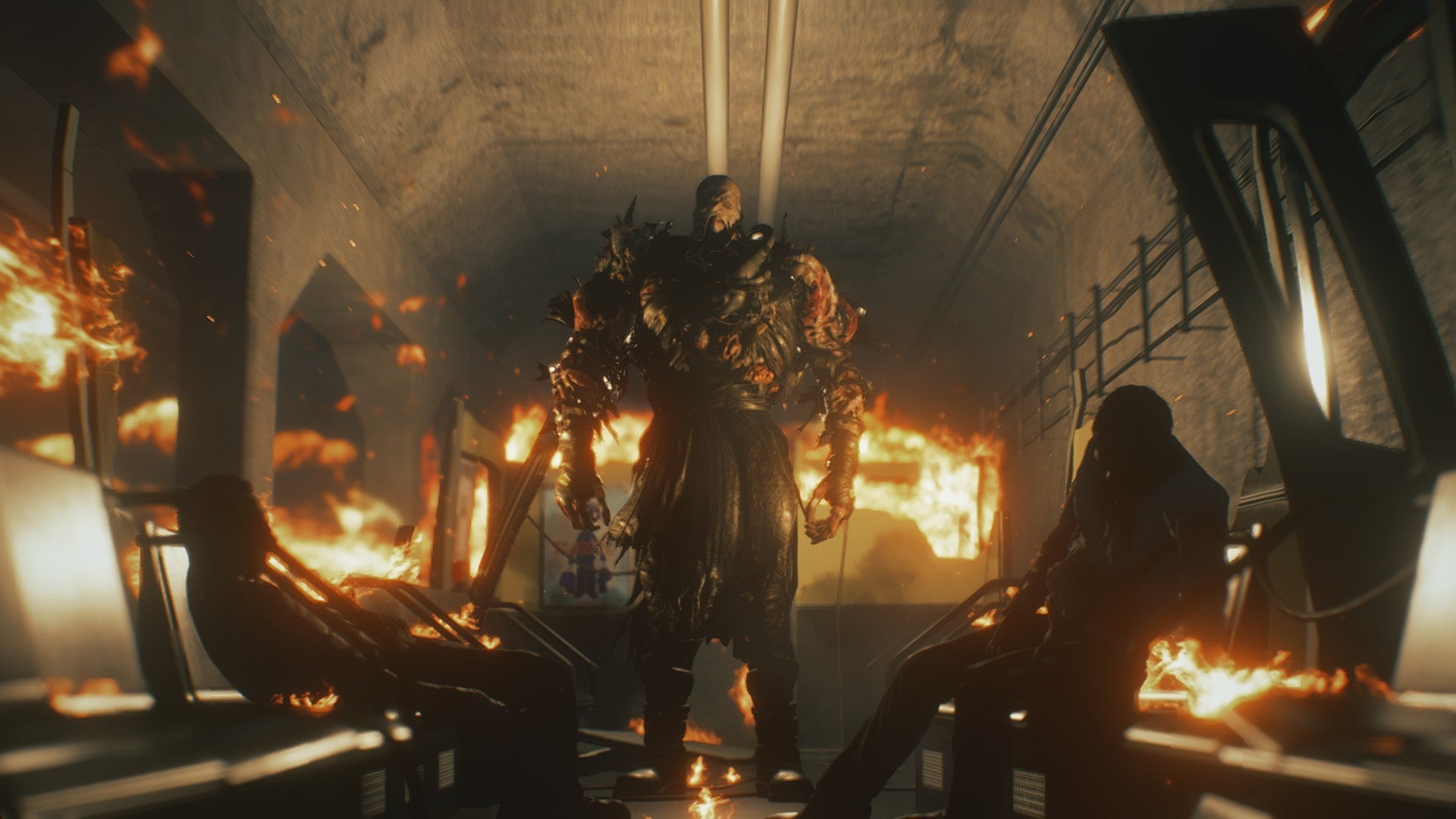 Only a second ago, there was a wall here. Now there is the suggestion of a wall—which is to say, nothing. Bricks lay scattered across the street and as the dust settles a shadow appears in the hole where the wall used to be.

I am already running. Running back to safety, to the room where (for some reason) the Nemesis can’t find me. Running as fast as I possibly can and knowing it’s still not fast enough. Bracing for the fist in the back of my skull, or the tentacle to grab my leg and trip me up. It’s that nightmare where you run and run from something but can’t quite get away—except it’s no nightmare, and I am running through the streets of Raccoon City screaming.

The door slams shut behind me. I’m safe…or maybe just cornered, trapped in this supply closet clutching an empty pistol and a knife, tossing pebbles at Goliath until he stops toying with me. And it’s then that I say something I never thought I’d say: “I miss Mr. X.”

Now we got bad blood

I am not done with Resident Evil 3, which is important context for everything I’m about to say here. We didn’t receive the PC version of Resident Evil 3 until Thursday, and while I tried to finish it before today…well, I didn’t try very hard, because I’m just not enjoying it very much.

Having never played Resident Evil 3, I didn’t know what to expect. All I knew was I loved last year’s Resident Evil 2 remake. It made me a fan—of the series, I said.

But maybe I spoke too soon, because Resident Evil 3 is doing its damnedest to drive me away again. Despite taking place concurrently with the events of Resident Evil 2, and using the same engine and many of the same weapons and even a few of the same environments, this is a very different game.

Mostly I miss the pacing of Resident Evil 2, the slow build from subtle horror to full-on action. Like many people, I fell in love with the Police Station. I loved how it expanded in layers, how each new key sent you further into its labyrinthine hallways. And I loved how you’d inevitably arrive back where you started, and find everything the same, but worse. More zombies, or more powerful zombies—and yet you were more powerful as well, better equipped to confront them.

Those early hours are still some of my fondest memories of Resident Evil 2.

Eventually you left the Police Station behind, and that more deliberate pacing along with it. Resident Evil 2 became an action game in its back half, but by then it felt like it had earned it. You’d built up an arsenal, built up some ammo reserves, and it was cathartic to let loose on Mr. X and give him the ol’ what-for.

Resident Evil 3 doesn’t build. Not to the same degree, anyway. Zombies always come in groups here—three, five, maybe more. There’s a lot of shooting, and the game’s not shy about giving you ammo to do it with. In Resident Evil 2, a dozen pistol rounds felt like a godsend. Here, I had pistol rounds in storage by the end of the first chapter, and I’d already done twice as much shooting.

And that’s the key, I think. In Resident Evil 2, zombies were the main antagonist. Sure, Mr. X would show up here and there to ruin your day and send you running for safety. He’d eventually wander off though, and you’d be back to exploring.

Nemesis isn’t so forgiving. You don’t just run Jill back to a Safe Room and wait for him to wander off. You need to attack him—with grenades, with your shotgun, with whatever’s at-hand. Failing that? You need to perfectly time a dodge and run past him, then hope he doesn’t whip a tentacle-arm around your leg and send you sprawling on your back.

Then he magically appears in front of you again, maybe on a roof or maybe bursting through another wall. Rinse and repeat.

Is it challenging? I guess. I have certainly died more often in Resident Evil 3 than I did in Resident Evil 2. I’m not finding it especially fun though. Running and shooting were two of the worst aspects of Resident Evil 2, and they take center stage here. I’ve played through at least four interminable chase sequences already, two boss fights, and a holdout mission where I mowed down easily 30 or 40 zombies.

Worse still are the “Hunters.” First encountered in the sewers, these fleshy plant-dinosaurs are capable of devouring Jill whole, which in video game terms means they kill you in a single hit. Popping them with the grenade launcher kills them, but it’s a long section spent fighting, and fighting, and fighting—and then maybe dying because one of them appeared from off-screen and ate you before you could react. And it all happens in the sewers, one of the worst environments from Resident Evil 2 and no better here. They’re not the only ones with one-hit kill cheap shots either. It’s a running theme in Resident Evil 3.

I keep hoping I’ll find an area as charming and intricate as the Police Station, but it hasn’t happened yet and seems less likely the longer I play. The opening stretch of Raccoon City holds promise, with Jill darting back and forth from donut shop to subway station to rail depot, but it’s over and done in an hour and then you move on. It doesn’t have nearly the same depth.

And revisiting the Police Station a bit later as Carlos is just salt in the wound, as you’re constrained to a mostly linear stretch of hallways between the entry hall and the STARS Office. “There’s a weird door over here,” Carlos says, and then his partner reminds him they have an objective and that objective entails walking straight down this hallway with an assault rifle. Certainly not faffing about with heart-shaped keys and arcane statues.

Are my expectations tainted by Resident Evil 2? Absolutely, and I’m sure there are people who didn’t get on with that brand of survival horror, and who might fall in love with Resident Evil 3 and its more action-oriented pacing—or fell in love with it 20 years ago, and are looking to rediscover that feeling.

It’s just not hooking me though. The linear level design, the combat focus, the cheap one-shot deaths (and annoying checkpoints), the omnipresent and omnipotent Nemesis—it’s like they made a game from all my least favorite aspects of Resident Evil 2. Turns out I was a fan of the classic Resident Evil formula this whole time, and only impeded by the tank controls. Now I too can join the legions of forum dwellers arguing about where Resident Evil lost its way, and how much action is “too much.”

I’m still planning to finish it, and who knows? Maybe it will win me over yet. It’s running out of time though. I’d guess I’m towards the end, the relatively normal streets of Raccoon City having given way to (shock!) a secret Umbrella Corporation laboratory. I’m very much in the setup for the final act, it feels like—both based on what I’ve seen in Resident Evil 3 and my existing knowledge of the timeline from Resident Evil 2. Let’s just say: Whatever Jill’s going to do, she’s on a pretty tight deadline to get it done right now.

If anything changes, I’ll be back to update this review accordingly. If not? Well, I tried to be a Resident Evil fan. I really did—and I’m as disappointed as anyone that this sequel’s not doing it for me.