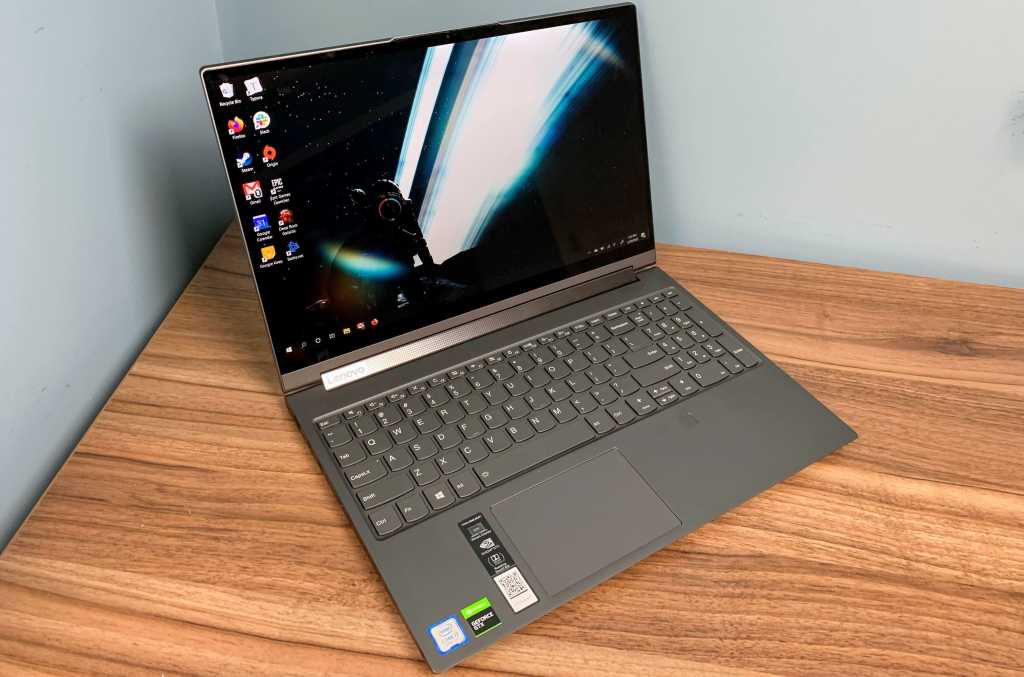 The Lenovo Yoga C940 is a slick 2-in-1 with a graphics punch, but it’s missing a few laptop niceties.

Plenty of Windows laptops try to position themselves as MacBook Pro alternatives, combining slick designs and vibrant displays with powerful PC performance, but the Lenovo Yoga C940 15 is no mere copycat.

While the Yoga looks sharp and has a bright display, it also leans into its differences as a Windows PC. It has a touchscreen that flips around into tablet mode, a built-in stylus for writing or sketching, and—thank heavens—a full-sized USB-A port to complement its two USB-C connections. It even fits in a number pad without cramping its excellent keyboard.

That’s not to say the Lenovo Yoga C940 15 ticks every imaginable box. Screen backlighting is a bit uneven, audio quality could be better, and limited configuration options will prevent you from turning this into a beastly desktop replacement. Also, if we’re comparing to Apple’s MacBooks, Lenovo’s laptop doesn’t include all the same niceties, such as a slightly larger screen and jumbo-sized trackpad.

Still, the Lenovo Yoga C940 15 is a decent choice for those who want a luxurious workhorse PC without giving up what Windows does best.

Our Lenovo Yoga C940 15 review unit has a list price of $1,700 at Best Buy and includes the following specs:

Best Buy also offers a 4K display version with the same other specs as above for $1,899. Lenovo’s website offers several other configurations: On the low end, you can drop to 12GB of RAM and 256GB of storage (currently $1,460), while on the high end you can upgrade to an Intel Core-i9-9880H processor, 4K display, and 2TB SSD ($2,440 as of this writing). In all cases, the Nvidia GeForce GTX 1650 is the only option for graphics, and the non-upgradeable RAM tops out at 16GB.

While it’s nice that Lenovo included a USB-A port on this laptop, its use of a proprietary charger—similar to the one Lenovo uses for its ThinkPads—is a drag, as is the lack of a MicroSD card slot and additional USB ports on the right side of the laptop.

The Lenovo Yoga C940 15 comes in either a darker “Iron Gray” or a lighter shade that Lenovo refers to as “Mica.” Its all-aluminum body, along with its sharp edges and flat sides, only serve to underscore the laptop’s heft, which is unavoidable given the discrete GPU inside. But for a workhorse laptop that folds around into a tablet, the C940’s size and weight are reasonable.

As with Lenovo’s smaller and skinnier Yoga C940 14, the 15-inch model packs some clever design ideas. The laptop’s rotating hinge doubles as a speaker grille that projects sound outward, and the display’s top bezel extends upward near the center of the screen, leaving extra room for the webcam and forming a little lip that makes it easier to open the laptop.

Our review unit’s display had a resolution of 1920 x 1080, which on a 15.6-inch screen has clearly visible pixels, but that’s going to be an acceptable trade-off for most folks given the performance and battery life issues—not to mention the higher price tags—that often come with 4K screens. (It’d be great to see a laptop like this with a 1440p display instead, and perhaps a 16:10 aspect ratio to boot, but that’s a rant for another day.)

The display’s brightness measures an eye-popping 415 nits at the center of the screen. While Lenovo’s ThinkPad X1 Extreme Gen 2 is in the same league (442 nits), most other 15-inch workhorse laptops don’t get anywhere close unless they’re made by Apple. Although the glass display can create a lot of glare when you’re outdoors or sitting in front of a window, the screen itself can get bright enough to compensate.

Viewing angles could be better, though. While this is an IPS display, it was hard to find an angle that provided steady brightness throughout, particularly on white backgrounds. It’s the kind of thing you might not notice until you notice it, at which point it becomes an annoyance.

The keyboard on the Lenovo Yoga C940 15 is among the nicest you’ll find on a consumer laptop. Although the keys lack the same travel as on Lenovo’s ThinkPads, they provide a pleasant tactile bump on the way down without being overly loud. (Oddly enough, the snappy sounds I heard on Lenovo’s 14-inch Yoga C940 weren’t as apparent here, perhaps because the larger and heavier body absorbs more of the noise.)

While not everyone needs a number pad on their laptop, Lenovo managed to fit one on the Yoga C940 15 without major sacrifice. Modifier keys such as Shift and Ctrl are a bit smaller than usual, but the size and spacing of letter keys are the same as on Lenovo’s 14-inch laptop.

It’s too bad the Yoga C940 15’s trackpad doesn’t utilize the extra space. It’s no larger than that of Lenovo’s 14-inch Yoga C940, and much smaller than the jumbo-sized trackpad on Apple’s MacBook Pro. And like most Windows laptop trackpads, the click mechanism gets increasingly stiff as your finger moves toward the top section.

After being wowed by the speakers on Lenovo’s 14-inch Yoga C940, the 15-inch model was a bit of a letdown. The larger laptop does have even louder speakers built into its rotating hinge—still better than the tin-can speakers you’d find on cheap laptops—but it lacks the low-end warmth that the smaller laptop offers and comes off as overly harsh at high volumes.

The webcam, meanwhile, met its already-low expectations, being a 720p shooter like pretty much every other laptop on the market. The privacy shutter is a nice touch, though, and while there’s no face recognition for Windows Hello, you can sign in with the fingerprint sensor just below the laptop’s cursor keys.

Although we sometimes see 2-in-1 laptops take a performance hit compared to their non-convertible peers, that doesn’t seem to be the case with the Lenovo Yoga C940 15. It’s a solid performer on the CPU side, and it holds its own on the GPU side despite not being officially a gaming rig. Battery life holds up quite nicely as well, both in benchmarks and everyday use.

Let’s start with Cinebench, which tests CPU performance over a short period of time. Here, the Lenovo Yoga C940 15 topped every other laptop with a 9th-generation Intel Core i7-9750H processor, both in single-threaded and multi-threaded performance. (The former accounts for most office productivity tasks, while the latter comes into play for image processing and rendering.)

To see how laptops fare under sustained workloads, we encode a large video file with the free HandBrake utility. Again, the C940 got the job done faster than nearly every laptop with a comparable CPU, save for MSI’s GS65 Stealth 9SD.

PCMark 8’s Work benchmark provides another look at how the Lenovo Yoga C940 15 zips through work tasks. Any score over 2,000 is satisfactory, so the Yoga C940 15’s score of 3,927 keeps you well above the baseline.

The Lenovo Yoga C940 uses the Max-Q version of Nvidia’s GeForce GTX 1650 graphics card, which balances performance with the thermal challenges of thin-and-light designs. As such, laptops with standard GTX 1650 GPUs fare a bit better. In 3DMark’s TimeSpy benchmark, for instance, the C940 fell markedly behind Dell’s XPS 15 7590 and Acer’s Nitro 7.

In practical terms, this means you’ll be able to play some modern competitive shooters like Fortnite and Apex Legends without issue, even at 1080p and the highest possible settings. But with games that are more demanding, you may have to ratchet resolution down to 720p or reduce quality settings for consistently high framerates. On the brighter side, while the system’s fan can get loud during gaming, it avoids the jet engine-like whine of more powerful gaming machines.

With any laptop that has a discrete graphics card, you should expect some compromise on battery life. Tthe Lenovo Yoga C940’s combination of a large 69,000 wHr battery and a 1080p, 60Hz display give it an advantage. In our looping video rundown test, the C940 15 lasted just over nine hours. Of course, battery life typically fell below two hours for gaming, but we found that the C940 15 could get through most of a workday with general productivity use.

Is this big Yoga for you?

As with so many other laptops, the Yoga C940 15’s worthiness is a matter of which trade-offs you’re willing to make. HP’s 15-inch Spectre x360 has a similar convertible design, but the version with GTX 1650 graphics has a much dimmer display. Dell’s XPS 15 7590 packs in 4K graphics and even better battery life, but its touchscreen variants get pricey and it’s not a convertible design. Gaming-first laptops like the Acer Nitro 7 will give you even better performance, but they’re not as nice to look at.

Of course, you could always go with a MacBook Pro, but then you’ll miss out on all those neat choices that make PCs like the Yoga C940 15 more interesting in the first place.