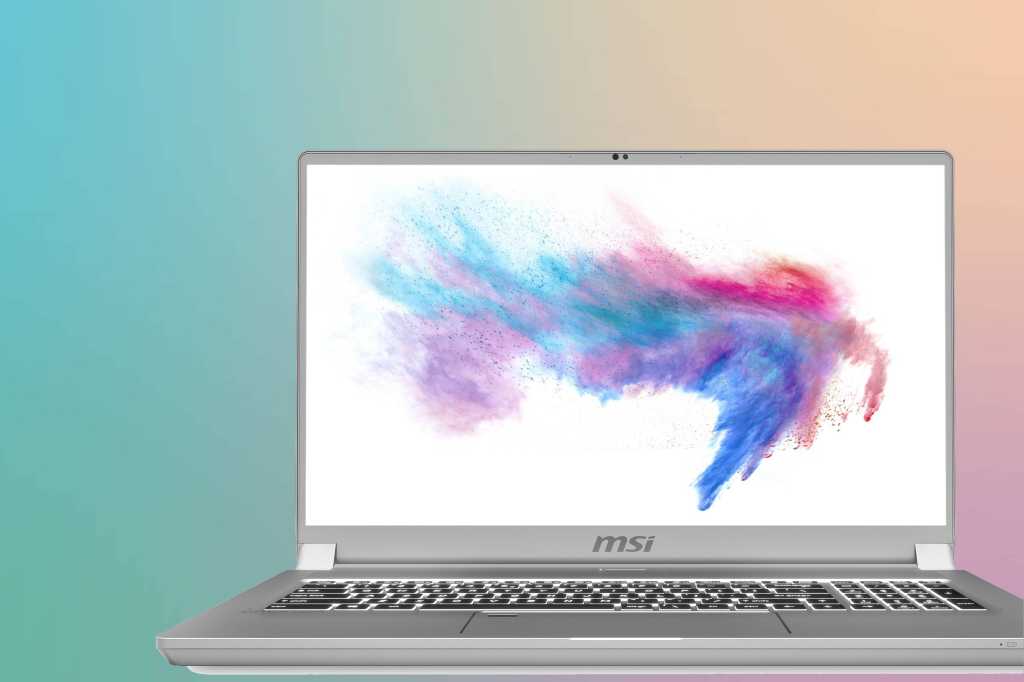 In the race to introduce the first laptop with miniLEDs, MSI’s Creator 17 may have just beaten everyone. Meanwhile, MSI’s GS66 Stealth and GE66 Raider gaming laptops rock 300MHz panels, and all of the new notebooks unwrapped Thursday pack Intel and Nvidia’s latest and greatest chips.

While the miniLED news and Comet Lake H isn’t much of a surprise after the laptop’s reveal at CES, the third shoe to drop is Nvidia’s new GeForce RTX Super-series GPUs, which were also announced Thursday.

MSI said the Creator 17 will offer both the GeForce RTX 2080 Super Max-Q and the GeForce Super RTX 2070 Max-Q as graphics options. While the Super moniker will get the most stares, the Max-Q deserves equal attention, as the newly designed laptop should feature the newest iteration of the technology. The latest version of Max-Q promises much less of a performance hit when compared to non-Max-Q laptops, thanks to some smart features that greatly improve overall efficiency. Read our story on Nvidia’s GeForce RTX Super for laptops for more details.

A laptop needs a CPU too, of course, and MSI has tapped Intel’s newly minted 10th-gen “Comet Lake H” Core chips for the Creator 17. Interestingly, MSI’s most potent CPU on offer is the Core i7-10875H, instead of Intel’s top-end Core i9-10980HK chip. Still, this 8-core Core i7 appears to improve upon the previous 6-core Core i7-9750H, hitting blistering boost clocks of 5.1GHz.

Oddly, despite all the new hardware on the inside, the real gem in MSI’s Creator 17 will likely be on the outside: a massive 17.3-inch 4K resolution screen that features miniLEDs.

The vast majority of backlit screens are built with conventional LEDS that might be 3mm wide. This limits the density, brightness, and evenness of backlighting. With miniLEDs, the width can be small as 0.1mm, which allows a magnitude more of LED density.

With MSI’s Creator 17, that adds up to a “TruePixel” display that can hit 1,000 nits, support 100-percent DCI-P3 color gamut, and meet Vesa’s DisplayHDR 1000 spec. Impressive. MSI says it’s packed 5,570 LEDs into a 240-zone array inside the TruePixel display. As the Creator 17 is meant for content creators, each laptop comes CalMAN color-calibrated from the factory.

If MSI’s laptop ships as expected later this month, it will make the Creator 17 the winner in a miniLED race that many expected Apple to win with its much deeper pockets.

MSI will also offer a lower-end version with the same CPU, but older GeForce RTX graphics cards, along with a heart-breaking 1080p IPS screen—but you do save some weight. The two top configurations weigh about 5.5 poundss, while the two 1080p laptops drop you to 5.3 pounds. The 1080p versions of the Creator 17 also get you higher refresh rates of 144Hz, compared to the miniLED’s 60Hz refresh.

If you’re wondering whether the laptops will mostly be vapor due to world events, MSI officials told PCWorld they expect to have the Creator 17 ready to ship in April, as MSI’s facilities are currently up and cranking out the new laptops.

MSI’s Creator 17 isn’t the only laptop the company is showing off with new hardware. But if you’ve followed our CES coverage, you already know about the MSI GS66 Stealth and GE66 Raider.

While we couldn’t say that much about the two laptops at CES, it’s now obvious both will feature Intel’s 10th-gen Comet Lake H chips and Nvidia’s GeForce RTX Super parts. Also no longer a secret: the option for a 1080p screen at a blistering 300Hz. While MSI will offer slower (ha!) 144Hz and 240Hz options, the top GS66 Stealth and GE66 Raider models will feature up to 300Hz refresh rates.

You might think high refresh rates are a gimmick except for pro-level players, but we were convinced otherwise after doing high-frame-rate competitions at Nvidia’s booth at CES. We were much more accurate on a 300Hz panel than on a screen with a lower refresh rate.

It’s interesting to note, however, that for the configuration with the fastest GPU (a GeForce RTX 2080 Super Max-Q) the GS66 Stealth backs the top CPU down to a 6-core Core i7-10750H chip. That same configuration will offer 32GB of RAM but a mere 512GB SSD to keep the price down to $2,700.

The good news for snobs who will turn their noses up at such a tiny SSD? MSI has heard the years of complaints about the difficulty in upgrading the GS series. The GS66 Stealth will let you easily access the two SO-DIMM slots and the two M.2 slots.

The GE66 Raider, on the other hand, gets a bigger facelift, with the most prominent feature being an RGB light bar on the front of the laptop body. The light bar can hit 16.7 million colors and as we know, makes you game better because nothing says PC gaming like RGB LEDs.

Besides next-gen Nvdia and Intel parts and the optional 300Hz panel, the GE66 Raider’s biggest change is in battery size. While the GE65 was limited to a pretty tiny 51 watt hour battery, the GE66 takes it to 99.9 watt hours.