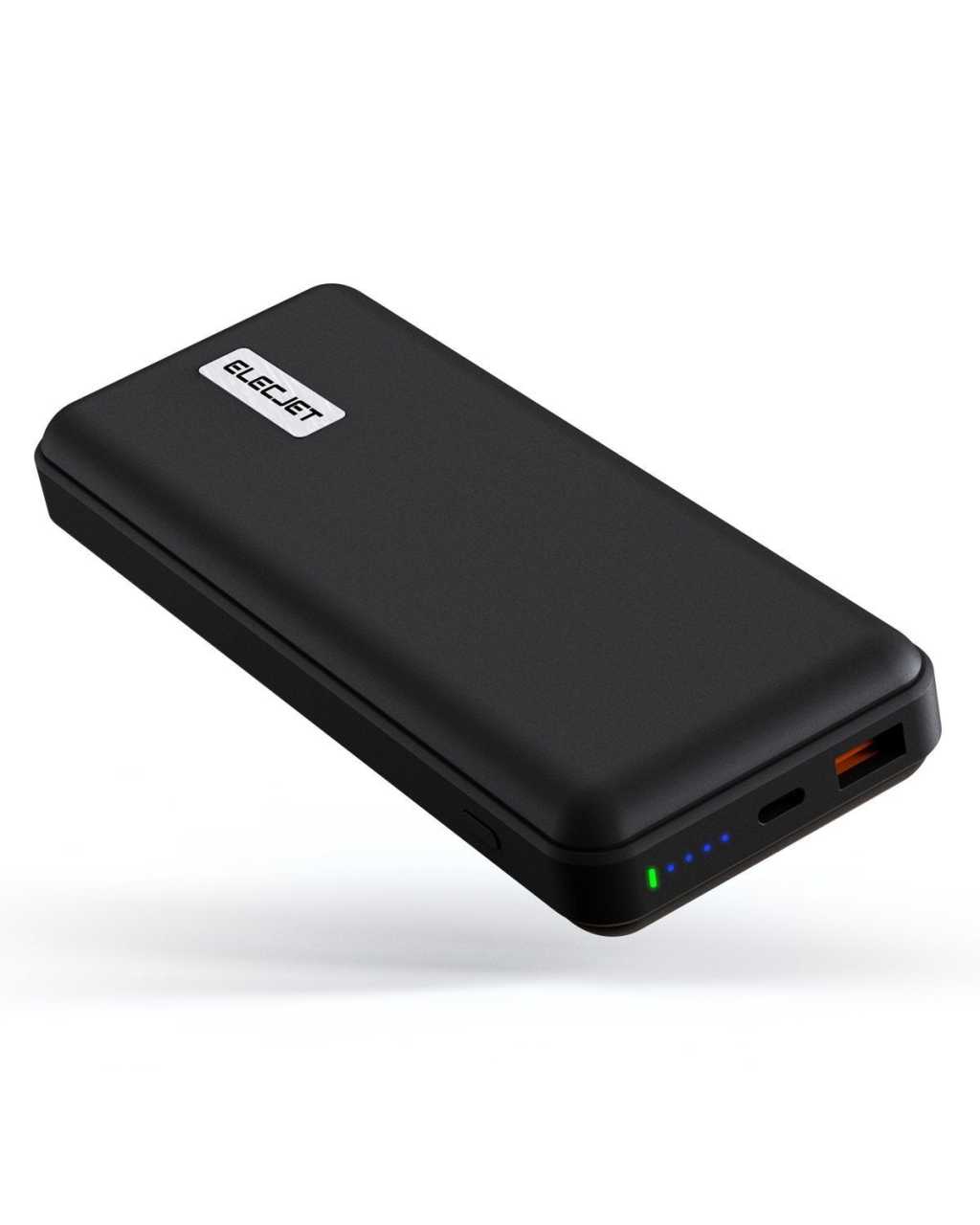 Image: Elecject
At a Glance

Elecjet’s PowerPie 20000mAh 45W PD battery pack is powerful enough to charge your MacBook, but portable enough to fit in a purse.

I’ve never used or tested any Elecjet products, but I was intrigued by the PowerPie 20000mAh battery pack’s promise to charge a Galaxy Note 10+ or S20 Ultra from zero to 70 percent in just 30 minutes.

The $60 PowerPie packs a 20,000 milliamp-hour (74Wh) battery and can charge compatible devices at up to 45W. It has only two ports—one USB-C, and one standard USB.

The USB-C port is what you’ll need to use to take advantage of power delivery to charge your Switch, fast charge a smartphone, or extend the battery life of your laptop with its 45W output. The standard USB port maxes out at 18W, which is a respectable speed for charging smaller gadgets.

On the front of the pack is an indicator light letting you know when the pack is on or charging, as well as a group of lights that give you a quick visual clue about the pack’s remaining juice. The lights are bright and easy to distinguish from a distance. The USB-C port is in the middle, with the USB port taking up the rest of the front. On the left side of the pack is a small power button that’s well hidden—so much so that it took me a minute to find it after unboxing the PowerPie.

The edges of the PowerPie are raised and have a rubber feel to them, making the pack easier to grip and carry. I wish more packs had this kind of design.

Included in the box is a carrying bag as well as a USB-C to USB-C cable. You’ll need to provide your own power supply or wall adapter.

Charging the pack is done via the USB-C port, which will also accept up to 45W. I connected the pack to a 45W PD power supply and monitored how long it took to charge. To my surprise, the PowerPie estimate of charging the pack in two and a half hours was spot on. It took 2 hours and 28 minutes to fully charge the pack.

I also tested Elecjet’s claim of charging a Galaxy S20 Ultra from completely dead to 70 percent in 30 minutes. I don’t have an S20 Ultra, but I do have an S20+, which has a slightly smaller battery than the Ultra. After 30 minutes connected to the charger, the battery was at 53 percent. So not quite as good as Elecjet’s promise, but still impressive for a battery pack.

I used our standard efficiency test to monitor how much of the 74Wh of total potential energy it put out. After a few hours at 61.239Wh, the pack turned off. That gives it an efficiency rating of 82.76 percent, while the average of all packs I’ve tested and reviewed is 82.64 percent.

I like the compact form factor and its ability to put out up to 45W of power when needed. I plan on using this pack a lot more going forward and see no issues with suggesting you do the same.