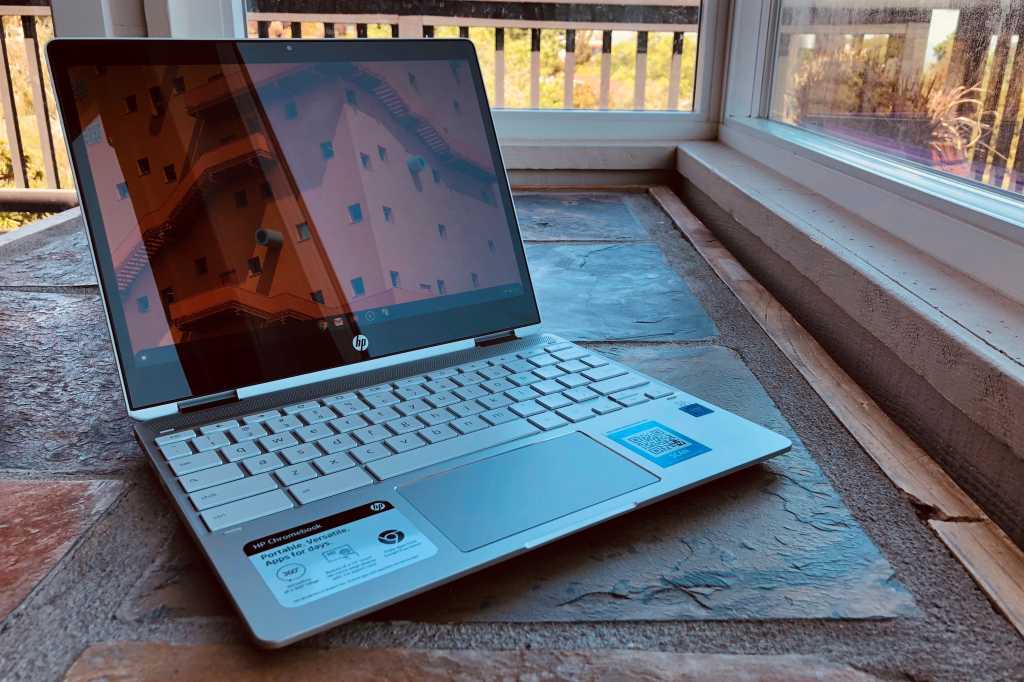 The HP Chromebook x360 12b is an affordable Chromebook for grown-ups, with good design and quality where it counts. Its modest performance will see you through most browser-based tasks, and the 3:2 display means you can work productively.

The HP Chromebook x360 12b is an affordable Chromebook made for grown-ups. It takes you a cut above the rock-bottom basic Chromebooks that hover around $250 (and continue to sell well). Get one of those for your kids—who cares if they destroy it? But you, the adult in the room, deserve the Chromebook x360 12b, with its surprisingly good design and great battery life.

This is still a budget-grade Chromebook, so there are some compromises: Performance is mediocre, and the 3:2 display, while nice and tall, isn’t very bright. Still, we think HP made reasonable choices to provide a productive and enjoyable experience without breaking the bank.

The Chromebook x360 12b we tested currently goes for $360 at Adorama. As you’ll see from the somewhat modest specs and features below (and the performance charts later on), HP spent less on the CPU, memory, and storage, and more on the design.

The specs tell just part of the story for the Chromebook x360 12b. HP put a lot of thought into key details, starting with the sturdy chassis. The body is mostly plastic, but the aluminum keyboard deck helps it feel very solid, even when held by one corner. The overall weight is light enough for easy toting.

The base is colored silver, while the plastic display lid is painted white. I’m always afraid I will ruin anything white, but the lid, perhaps because of its matte finish (or my habitually frequent handwashing), just picks up a little shine sometimes where I touch it.

HP makes a strategic trade-off with the display. With a measured luminance of 229 nits, it’s just barely bright enough to work in a well-lit office, and don’t even try to take it outside. The bezels are average, not super-slim. Instead, HP prioritized giving it a 3:2 aspect ratio. We’re used to seeing 16:9 in many laptops, but that wider screen makes it hard to be productive if you have to navigate long documents or big spreadsheets. The Chromebook x360 12b’s taller screen makes it easier to get real work done, and I’ll gladly take that over a few extra nits.

The USB port selection is worth noting. HP keeps one toe in the past with the single USB-A port, but having two USB-C ports keeps users in step with the present trend. The charger connects via one of those USB-C ports, so if you plan to have it plugged in most of the time you might want to buy a USB-C hub to give yourself plenty of options.

HP builds a wide speaker across the top of the keyboard tray. Its audio quality is what you’d expect from a laptop of this size—a bit tinny, with meager bass—but at least the sound is coming right at you, rather than from the sides as in some designs. When the Chromebook x360 12b is configured in tent mode, the speaker faces away from you, diminishing the sound slightly. I turned up the volume a bit to compensate.

I tend to approach low-cost Chromebooks with dread, as the keyboards can be awful—with harsh travel akin to typing on rocks. The Chromebook x360 12b’s keyboard rises several steps above, providing firm and gentle feedback that kept me comfortable through hours of intensive typing.

The trackpad is huge and centered on the spacebar. It clicks almost all the way to the top. We’ve had uneven experiences with HP trackpads—they occasionally seemed to lose palm rejection or run amuck selecting text—but this one exhibited smooth, predictable responsiveness.

The webcam is your standard 720p resolution, with an 88-degree field of view. It delivers good image quality for typical videoconferencing use.

Note that the Chromebook x360 12b supports pen input, and I tried it successfully with an HP stylus I had available. It supports any USI-compatible pen—HP offers one for about $70 through HP.comRemove non-product link. A magnetic area along the left side of the keyboard deck allows the pen to stay rooted in place.

Given the Celeron N4000 CPU, you should expect adequate, rather than blazing, performance from the Chromebook x360 12b. Within the Chrome ecosystem, that’s usually enough. In my typical workday I move among multiple web applications, with 15 or 20 tabs open in my browser. I worked many days on the Chromebook x360 12b with no noticeable lag. If you’re streaming video or playing online games, you’ll probably notice more of a strain.

The results fall into line based on the CPU, and the Celeron N4000 in the Chromebook x360 12b therefore tends to dwell near the bottom. Because of the consistency of the results across all tests, I’ll show just a few here.

First up is CrXPRT’s Performance test, which alternates productivity workloads with periods of low activity, to simulate an on-again, off-again rhythm of laptop use.

In CrXPRT Performance and every other test we ran, the HP Chromebook x360 12b basically stayed in line with the older Acer Chromebook 15 (which has an earlier generation of Celeron processor), and lagged behind models with more powerful Core-level processors. At least it can hold its head high against the Lenovo Chromebook Duet, which uses an even slower Mediatek processor.

Here’s the same story all over again in Jetstream 2, a Javascript and WebAssembly benchmark aimed at more advanced web applications.

The HP Chromebook x360 12b moves up a notch in battery life, posting a solid 11-plus hours in the CrXPRT 2 rundown test.

Note, however, that the laptops it beats are older models. The Chromebooks that exceed it, by two or more hours, are contemporary and mostly more expensive. The Chromebook that beats everyone on battery is the significantly cheaper Lenovo IdeaPad Chromebook Duet (but remember, its performance is the slowest of the lot).

The HP Chromebook x360 12b is a good fit for people who want something affordable, but also noticeably nicer than what kids might use in school. It’s small, light, and versatile, and even comfortable to work on for long periods. I also know I’m going to miss the display’s 3:2 aspect ratio when I go back to a wider-screen laptop.