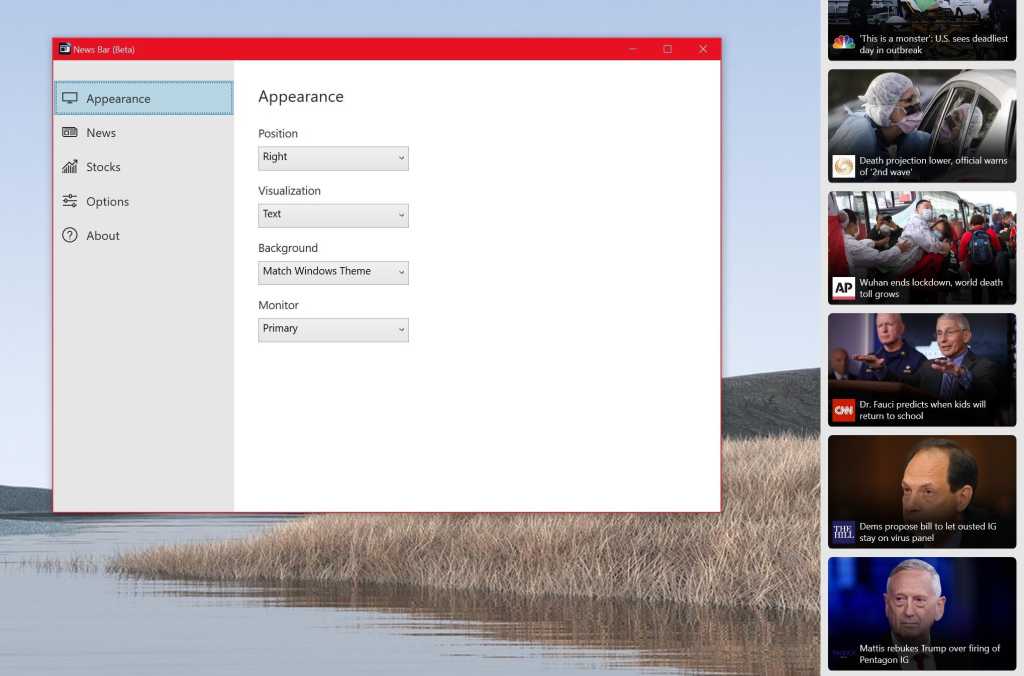 Microsoft is launching a redesigned Microsoft News app, now dubbed the Microsoft News Bar, in conjunction with a new Windows 10 Insider build that tidies up your PC’s storage.

Windows 10 Insider build 19603 is part of the Fast Ring, a sort of repository for ongoing code that Microsoft hasn’t formally slated for any particular release. (The Slow Ring, by contrast, is code that will appear in the upcoming release.)

Build 19603 contains several new features, a change from a recent run of bug fixes: better file integration within Windows Subsystem for Linux, improvements to the Storage settings, the News Bar, and support for the Canon CR3 format within Microsoft’s RAW image extension.

Many people don’t know that Microsoft curates—and pays for—licensed news content from The Washington Post, The New York Times, and many other sources. It’s a terrific way to read the top stories from trusted papers, and the Microsoft News app is still found on the Microsoft Store for Windows, Android, and iOS. Inexplicably, however, Microsoft stopped loading it on PCs. (You’ll also see this licensed news content as part of the “Informative” tab view in Microsoft Edge.)

Microsoft News Bar does not require a Windows Insider build to run, though it’s only available on your Windows PC as a beta app. Essentially, it’s a ticker that runs along the bottom of your screen, with the default set to text mode. You can also set it to display photos, as well as photos with their accompanying headlines—or hide it entirely. For now, only general news information is shown, along with company news tied to a specific stock symbol. Weather and Sports news will come in the future, Microsoft said. (My News Bar already showed a sports headline talking about the NFL potential for college football star Tua Tagovailoa, however.)

Right now, News Bar is pretty basic. In the Microsoft News app, for example, you can search for and include particular topics or interests. That capability isn’t built into News Bar yet.

It’s not quite as clear how useful Microsoft’s new storage recommendations will be. Within the Windows 10 Settings menu, the Storage submenu already breaks out how much space libraries like your desktop, Pictures, and Apps already take up. Now there’s a new subheading: “User cleanup recommendations,” together with an estimate of how much free space you’d be able to save.

Click the embedded link, and Windows will gather up large or unused files, such as downloaded video, and offer to delete them. You’ll be able to see what each file is and its file size, as well as link to the file itself.

You may recall from our Windows 10 20H1 review that Linux files were accessible via the Windows File Explorer. (Eventually Windows 10 20H1 or version 2004 will roll out to everyone, but we’re still waiting.) That feature is still accessible, but Microsoft has now added an icon of Tux, the little penguin who’s the mascot (officially, “brand character”) for the Linux kernel. You’ll find Tux sitting cheerily in the left-hand nav bar.

Selecting the Linux icon will show you a view of all your distros. Selecting one will place you in the Linux root file system for that distro, Microsoft says.