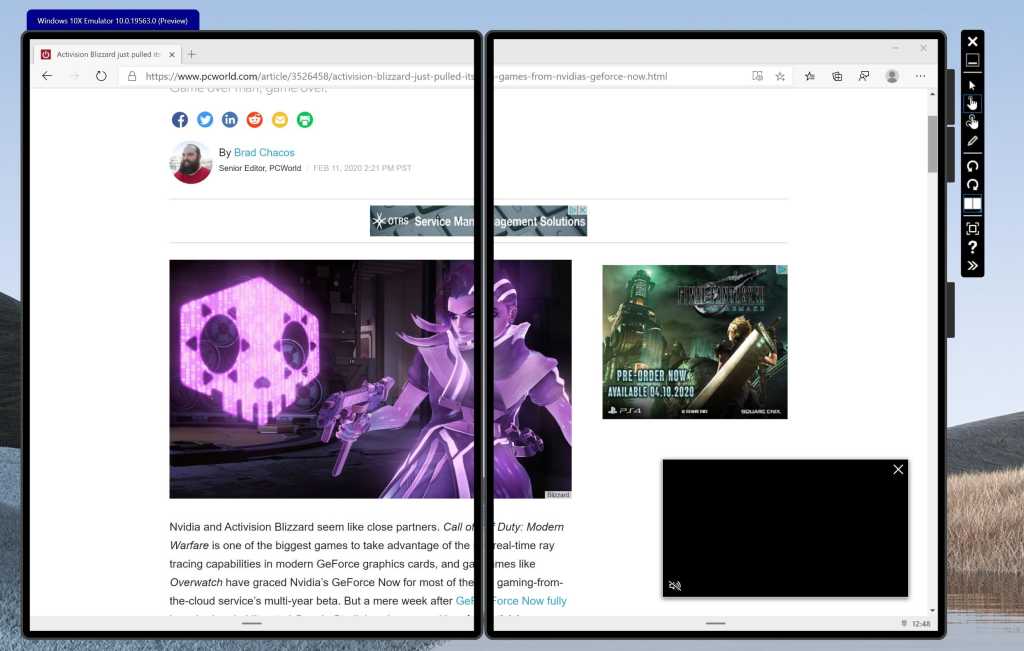 With dual-screen Windows devices apparently off the table for 2020, Microsoft’s Windows 10X has to find a home. Will it become a replacement for Windows 10 S on low-cost single-screen devices instead?

According to ZDNet, the delays associated with the coronavirus have pushed back the launches of Surface Neo and other dual-screen PCs, past their expected holiday 2020 debut and into 2021. Microsoft’s Android-powered Surface Duo has apparently not been affected.

Sources close to the company had told PCWorld that the Surface Book 3 and Surface Go 2 launch was being delayed until the end of April. That delay was due to concerns that Microsoft simply wouldn’t have enough devices to put in stores, they said. Microsoft is also wrestling with the reality that audiences might not want a premium Windows workstation and a mobile-centric Windows device when consumers are stuck at home because of the coronavirus pandemic, worried about losing their jobs.

A source close to Microsoft indicated that the Surface Neo is being paused to realign resources to address the most urgent customer needs. The Android-based Surface Duo is still on track to ship in 2020.

Microsoft has also invested resources into developing Windows 10X, which was released as an emulator in February. Enterprising users figured out a way to put it on a single-screen device shortly thereafter.

According to ZDNet, single-screen Windows 10X devices are now the priority, including potentially traditional clamshells and two-in-ones. The reason may have a lot to do with the lukewarm reception for Windows 10 S.

Windows 10X has what schools want—if it works

When Microsoft launched Windows 10 S in 2017, it had designs on upending Google and its inexpensive Chromebook hardware in schools. At the time, Windows devices were criticized as being expensive and overcomplicated. They still are. Google’s approach was to confine pretty much everything to the web, and sandbox it within its ChromeOS operating system. That met schools’ budgetary needs, and also gave them a device that was harder for kids to mess up.

Up to now, we’ve all been somewhat obsessed with Microsoft’s vision for pricey dual-screen hardware, and whether that makes sense in a PC world largely predicated on a single screen and keyboard. But with Microsoft now delaying those dual-screen devices, the company could pivot and start positioning Windows 10X for the low-cost market.

If you’ve read our earlier coverage of Windows 10X, it’s easy to see the potential. Like Windows 10 S, Windows 10X is designed to be locked down, so that only trusted apps can run in the OS. (This time, however, there’s a broader range of “trusted” apps, beyond the Windows Store.) Updates will take place quickly and behind the scenes. It’s possible no anti-malware will be required.

Perhaps the most important advantage to Windows 10X will be its container model, however. Every app within Windows 10X will run within its own virtualized container, protecting the OS, the user’s data, and other applications in case an app goes rogue. Microsoft’s also saying, however, that it will require fewer resources and operate with lower latency than traditional virtual machines, a necessity for an environment whose hardware will probably as cut as many corners as possible in the name of cost.

Windows 10X is also visually simple. Gone is the traditional Start menu, replaced with a very bland “app drawer” model that mimics the interface of a smartphone.

Whatever happens will likely take some time to shake out. As ZDNet notes, nailing the app container model will likely be Microsoft’s short-term priority. It will have to finish off the OS, polish it, integrate it with its existing device management software, and convince PC makers either to create dedicated single-screen Windows 10X devices for it or repurpose some of its existing hardware. Most likely, virtually all PC makers will follow suit—while continuing to develop and supply Chromebooks just in case Windows 10X fails to gain traction.

If you’re a Surface Duo fan, don’t worry. Microsoft has been happy to show off the Surface Duo Android phone in a work-from-home environment—right next to a Surface Book, incidentally. As for Windows 10X: Well, Microsoft has to be shooting for July or August of 2021 to release Windows 10X, in order to make the back-to-school deadline. Until then, traditional Windows PCs (and Chromebooks) will rule the roost.