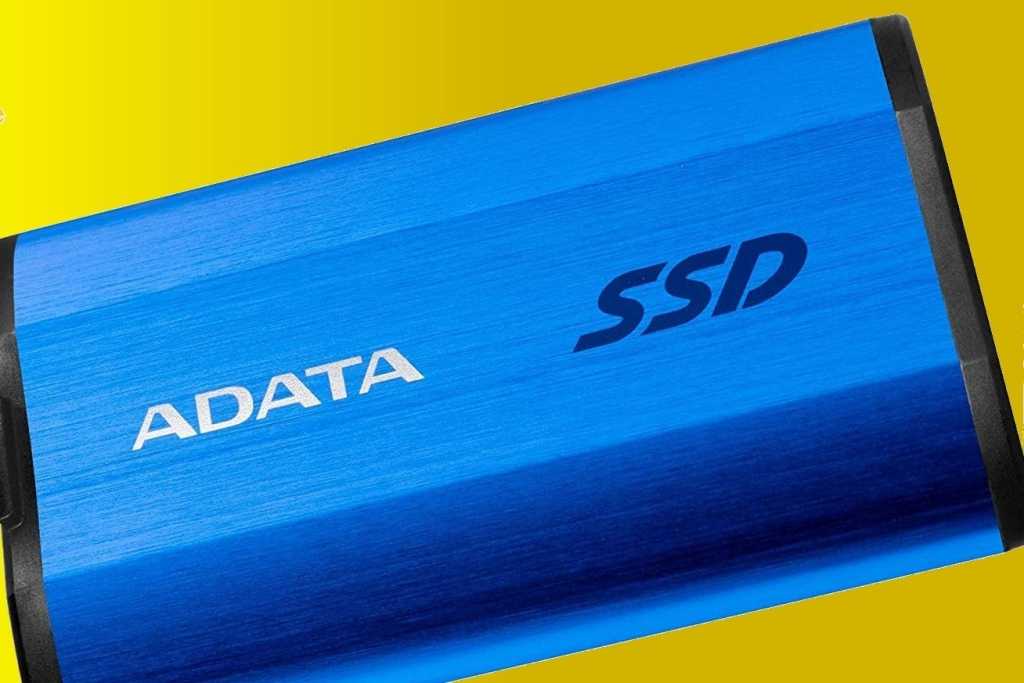 The SE800 is a great reader and a decent writer that’s a few bucks less than the competition and get this—IP68 rated. Other ultraportable SSDs are rugged, but this is the first we’ve seen with an IP rating, and a very healthy one that covers submersion at that.

Most ultraportable SSDs are rugged by design, but Adata’s SE800 Potable SSD takes the cake with a real, honest-to-goodness IP68 rating. That means you can drop it in the pool or bury it in the garden without fear of damage. Why you’d want to do those things is another question. We’d recommend you simply keep it in your pocket, given that it’s cheaper and just as fast as the top-tier competition.

When we classify the SE800 as an ultraportable, it’s because it’s a mere 2.8 x 1.7 x 0.4 inches thick, and weighs a only 1.4 ounces. It’s the most compact we’ve seen, though none of the competition (Samsung’s T5 and T7, SanDisk’s Extreme Pro Portable, Crucial’s X8, etc.) is significantly larger. All will lay lightly in the palm of your hand or ride easily in a shirt pocket.

The SE800 ships in either black or a rich blue, however, its most salient physical feature is a captive plastic end-cap that pops off to reveal the Type-C USB port. That cover (which protects the port while in transit) is why it is IP68 rated against the elements. Without it, the drive would likely not survive the 1.5-meter, 30-minute submersion test that rating requires.

The SE800 is available in two flavors: 512GB (currently $90 from Amazon.comRemove non-product link), and the 1TB capacity we tested (currently $150 from Amazon.com). The drive is warrantied for three years. Adata didn’t provide a TBW (TerraBytes Written) rating, but neither do other ultraportable SSD vendors for some reason. The company did let us know that the NVMe bridge chip/controller is from Innogrit, and the NAND is 96-layer stacked/layered/3D.

The SE800 couldn’t match SanDisk’s Extreme Portable Pro in terms of overall performance, but it’s no slouch either reading or writing data. None of the latest NVMe-based ultra portable SSDs are. Even the PNY Pro Elite with its aberrational synthetic benchmark results is fine in the real world.

CrystalDiskMark 6 gave the SE800 a mediocre rating for sustained writing, considerably slower than the Samsung T7’s. However, the SE800 actually bested that competitor in our 48GB write tests.

Note that while the CrystalDiskMark 6 results above may be true for relatively small transfers of 1GB, as data sets get larger, the difference in performance between the drives drops significanlty. None of the ultra-portables, nor SSDs in general, live up to the numbers generated by synthetic benchmarks such as CDM 6 or AS SSD. The 48GB transfer results below bear that out.

Although it placed third among the latest NVMe ultra portables we’ve tested, the SE800’s margin of defeat was relatively slight. It easily outshines any of the last generation of SATA-based ultraportable SSDs.

The SE800, with its weather-proofing end cap, is unique in its ability to withstand immersion in liquids. Given that it costs less while providing roughly the same performance as the competition is the kicker. Recommended, unless you just have to have the Samsung T7’s fingerprint scanner, or every last ounce of speed that the SanDisk Extreme Pro Portable offers.