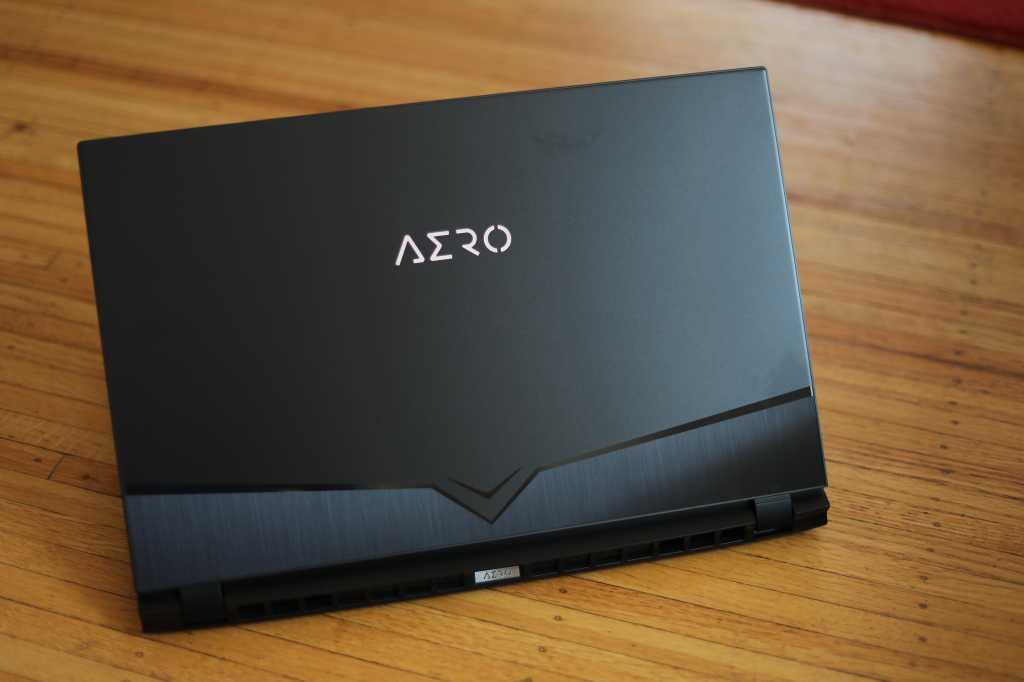 If you’re squinting at this review from your tiny 13-inch laptop screen, you may be like the many people who started working from home a few weeks ago and realized that portability means nothing if you’re going blind using a tiny screen.

A 4K laptop that makes sense

We haven’t been big fans of 4K displays on smaller laptops, as the hit on battery life typically hasn’t been worth the pixel-density tradeoff. With the Aero 17 though, we’re pleased to say battery life was far better than we expected for a 4K panel (more on that later).

And yes, the 4K pixel density is far more useful on a 17.3-inch screen than a 13.3-inch panel. It’s enough resolution that you can tile multiple windows and they’re all still legible.

The Aero 17’s panel is also rated for VESA’s HDR 400 spec, which mandates such things as its name implies: a minimum of 400 nits’ peak-level brightness, and sRGB color gamut support.

We measured the Aero 17’s brightness peak at about 423 nits. While the HDR 400 rating is the entry level for HDR specs and mandates only 100 percent of sRGB, Gigabyte brings more to the table with 100 percent of Adobe RGB color gamut. The panel, an AU Optronics B173ZAN03.2, is a rated 10-bit panel, too which means it’ll push more than 1.07 billion colors.

Gigabyte continues to offer factory Xrite Pantone color calibration on every laptop panel. Gigabyte suggests, perhaps with some bias, that some of its competitors only do batch testing of panels.

Let’s just say if you’re going to go big, you might as well go with a panel with a lot of pedigree. Because the Aero 17 leans toward content creation professionals rather than gamers, the panel and hardware are really intended for workers, not players.

Our Aero 17 review unit ($2,800 from Gigabyte.com) exudes content creator from its high-end chip to its fast RAM and discrete GPU. There’s even an SD card slot for the photography folks! Here are all the details:

The Aero 17 cares about connectivity

Content creators need a lot of connectivity, and for this the Aero 17 uses its larger body to its advantage. The right side of the laptop gives you a USB-A 5Gbps port, Thunderbolt 3, miniDisplayPort 1.4, full-size HDMI 2.0, and a charger port for the 230-watt power brick. Both the DisplayPort and HDMI are plumbed into the GeForce RTX card, while the Thunderbolt 3 connects to the integrated graphics chip. In total, three external displays should be supported.

The left side of the Aero 17 features a mic and headset jack, two more USB-A 5Gbps ports, Gigabit ethernet and an SD card reader.

For the SD-obsessed, the card slot leaves about half the card sticking out when in use (so no, you can’t hide a card inside of the laptop as auxiliary storage). The card reader is also UHS-II compliant, which will make some unhappy because that’s old-school now—other vendors are now touting UHS-III-compliant slots. In the grand scheme of things it probably doesn’t matter unless you are moving a tremendous amount of data from a high-speed UHS-III SD card.

The trackpad on the Aero 17 is glass-smooth and is Microsoft Precision Touchpad driver-compliant. It has a small biometric fingerprint reader as well.

The keyboard deserves some call out for its per-key RGB. You’ve seen per-key RGB but you probably haven’t seen one this bright in a laptop—almost painfully bright when turned up. (You can almost hear the battery whimper). We typically see keyboard backlighting wash out in a sunny room, but not so with the Aero 17.

The keyboard action, unfortunately, isn’t as dazzling as the RGB. We found it to be a little stiff, and the keys a little small. It’s far from a deal-breaker, but it’s also far from our favorite keyboard.

Normally we wouldn’t give a hoot about the webcam, which you’d immediately cover with tape anyway. But webcam quality has suddenly gotten everyone’s attention during coronavirus shelter-in-place, so we took a closer look.

The Aero 17’s is 720p—the resolution you’ll find on the vast majority of laptop webcams. It’s the standard for video calls—a 1080p webcam may get a finer image, but the file size will be huge. We appreciate the slide cover to black out the camera.

Unfortunately the low-mount design creates an awkward default angle for videoconferencing, emphasizing your nostrils and double chin rather than your designer eyewear. It also makes your coworkers think you’re not even paying attention when, in fact, you’re staring right at your screen. You can see this illustrated in the picture below.

Despite staring directly at the laptop’s screen, it looks like I’m staring out into space, wishing I had looped video of myself into this never ending meeting. The camera itself seems OK, though I noticed a fair amount of compression and noise.

The Aero 17’s design is fairly friendly for upgrades, with the RAM and SSDs accessible once the bottom is removed. In the image below (provided by Gigabyte), there’s a free M.2 slot should you need to add internal storage. RAM is right there, too. You can also see the cooling for the laptop.

You can read our Core i7 Comet Lake H review for a deeper look at the Core i7-10875H’s performance. Of the shorter list of tests we’ll show here, suffice it to say the 8-core 10th-gen Core i7 is the best CPU from this family so far, giving you performance just behind what used to be a pricey Core i9 chip. The Core i7-10875H’s biggest problem is the new Ryzen 4000 CPUs, which make a compelling counterpoint. It’s a moot point for the Aero 17, though, because Gigabyte is not offering an AMD alternative.

For our testing, we didn’t rely on Gigabyte’s “AI” feature, which references an AI database for guidance on how hard it can push loads. Instead we set the laptop to its “gaming” fan threshold and set the GPU and CPU settings to their maximum setting. We don’t believe this to be an overclock, but it’s also hard to say because the Gigabyte utility we used was a hot mess in some areas. It’s not clear what certain buttons do, and the manual fan curve settings make no sense unless you believe 12 comes before 7. Even so, the Aero 17 and its Comet Lake H  are definitely in the 8-core club.

The Core i7-10875H’s secreat sauce is its high clock speeds under heavy loads. Under one or even two threads, it can hit 5.1GHz, which puts it at the very top for single-threaded performance. That’s no small feat with a bunch of Core i9’s and a Ryzen 9 vying for the top spot.

How a laptop and CPU combination responds under heavy loads that last a long time matters, too. For that we use HandBrake to encode a 30GB file using the CPU only. This test used to take an hour, but with these higher-core CPUs we’re down to 20 or 25 minutes. It’s still long enough to burn off most boost performance. We can see the Aero 17 earns its keep among the Core i9s and Ryzen 9 chip yet again.

The Aero 17 came configured as a content creation laptop with Nvidia’s Studio drivers. It’s still a pretty good gaming laptop though, and the synthetic 3DMark Time Spy puts the GeForce RTX 2070 Super Max-Q right in the neighborhood of faster RTX 2080 Max-Q GPUs. Laptop GPU performance is all about how far the laptop maker puts the pedal to the metal though.

To gauge hardware ray tracing performance, we gathered up all of the scores we’ve recorded for 3DMark’s Port Royal test. Again, GPU performance varies greatly by the hardware implementation. The GeForce RTX 2070 Super Max-Q in the Aero 27 has enough ponies to easily hang with GeForce RTX 2080 Max-Q laptops.

As the laptop was intended as a content creation build, we did run a few more GPU-focused content creation tests. The first is Octane RTX 2019, which measures the ray tracing performance of GeForce RTX cards. The winner is the Aero 17, putting the GeForce RTX 2080 Max-Q in the Omen X 2XS far behind it. The result from Octane RTX 2019 matched results we saw from other GPU-based tests and seemed to confirm Nvidia’s claim of improved Max-Q performance. Add in the increased silicon in the Super-series of GPUs and you basically have the new standard for gaming and content creation laptops.

We’ll close off our testing with battery performance. For that we loop a 4K video using Windows’ own Movies & TV app. We set the laptop in Airplane more with the screen set at 250 to 260 nits, and earbuds connected with volume at midrange.

The result we saw was actually fairly amazing when you consider the giant 17.3-inch screen and 4K resolution. Moving a 13-inch laptop to 4K, for example usually removes at least a third of the battery life over a 1080p screen. That wasn’t the case here.

Yup, that’s seven hours of video run time from a giant screen (which means more LEDs) and at 4K resolution (which typically means more power consumption to push the light through those tiny, high-resolution holes), pushing aside the record held for years by Gigabyte’s Aero 15X, amusingly enough.

Mind you, video play back isn’t exactly hard work. Push the CPU hard in Photoshop or Premiere, and we’d say you’ll be lucky to see 2.5 hours of run time. Play a game or render on the GPU and we’d say expect no more than 1.5 to 2 hours at best. Even web browsing is likely to result in 4 to 5 hours rather than the 7 we saw here.

Let’s not take away from what the Aero 17 has pulled off, though. Fantastic battery life with a giant 4K screen is nothing less than impressive.

We’ll end this by pointing out the obvious: Ryzen 4000 isn’t going away. Everything we’ve seen tells us it will shake up the laptop world as we have never seen before.

At the same time, you can’t just say “this laptop would be better with Ryzen.” Intel-based laptops have advantages, too—like Thunderbolt 3, and (so far) options for high-end GeForce GPUs that can’t be found on AMD right now.

So where does that leave us? We can say, with one hell of a laptop for content creation professionals that seems to hit all the high points, with a fast CPU, a fast GPU and a giant 4K calibrated screen.

It’s far from perfect: We didn’t get into the fan noise, but let’s say they’re often loud when set to the gaming profile, and border on being too loud. The speakers are nothing special. And don’t forget the nose cam.

We can tell you we’d take a 17.3-inch  wonder like the Aero 17 over any 13-inch and most of the 15-inch models in today’s world, because we know portability isn’t everything.