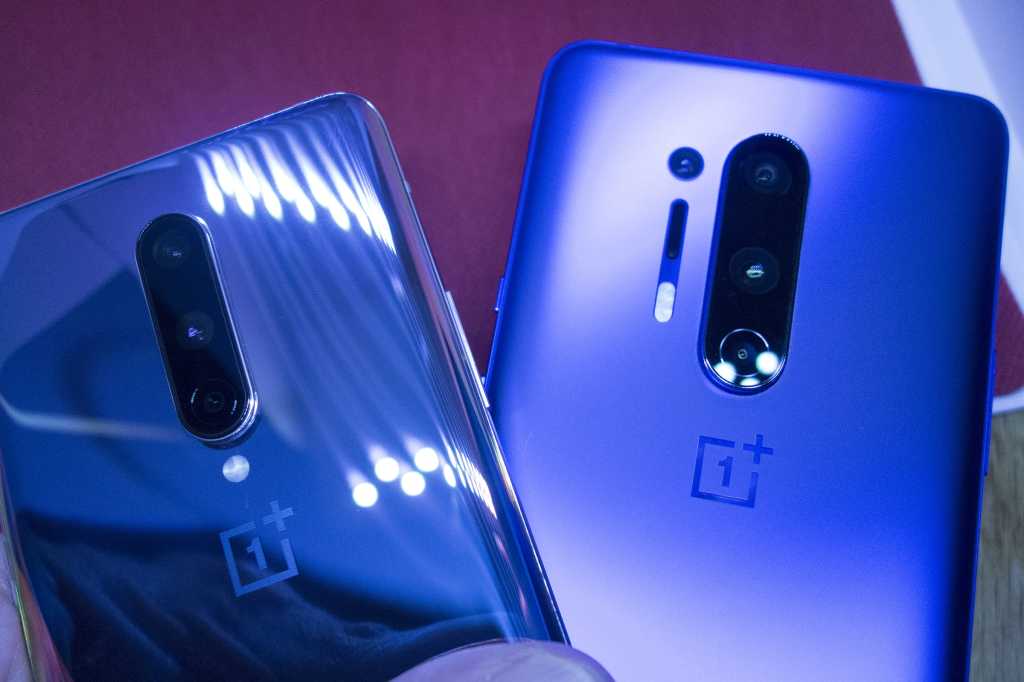 The OnePlus 8 Pro can stand spec to spec against any phone available today and more than hold its own. Without the OnePlus logo on the back, in fact, you could easily mistake it for the newest Galaxy phone or iPhone. It’s that luxurious.

Even the entry-level OnePlus 8 feels incredibly premium this year. There are some corners cut to bring down the price somewhat—no wireless charging or IP-rated water resistance, slower RAM, and fewer pixels, to name a few—but its all-glass design, gorgeous screen, and tremendous speed still make it feel every bit as high end as Samsung’s Galaxy S20. From the build to the bezels to the battery, the OnePlus 8 and 8 Pro are without a doubt the best phones OnePlus has ever made and are strong contenders for phone of the year.

Granted, you’re getting more for your money, most notably sub-6GHz 5G support across the board, but the OnePlus 8 Pro isn’t playing in the shallow end of the pool anymore. It’s a full-on premium phone with a price tag to match.

The 8 and * Pro aren’t the first OnePlus phones that come with 5G support, but they are the first ones that you can’t get without it. And a lot of other cutting-edge specs as well:

Those aren’t just hefty specs. It’s safe to say you won’t find another Android phone that can outperform the OnePlus 8 Pro, at least on paper. But even with breakthrough speeds inside, it’s the screen that will command all of your attention. No matter which OnePlus phone you pick, you’re going to be getting a fantastic display—but the one on Pro model is simply stunning.

Before we get to the speed, OnePlus has also amped up the color accuracy, brightness, and overall vibrance, particularly on the 8 Pro. Features like HDR Boost and motion graphics smoothing make supported video apps even better and some 4,000 different nit levels make adaptive brightness comfortable and barely noticeable. OnePlus has assigned an independent hardware chip to help with display graphics and the difference is huge. Since the 5T, OnePlus has been steadily improving on its displays, but the 8 Pro feels as close to perfect as you’re going to get.

The OnePlus 8 has a similar screen to last year’s 90Hz Fluid Display, which is nothing to sneeze at, but the Pro ups the ante all the way to 120Hz with a 240Hz touch sampling rate. It’s as impressive as all those numbers make it sound, and unlike the Galaxy S20, which limits its 120Hz screen to 1080p, you can use it in full Quad HD resolution. It’s hard to describe without actually using it, but scrolling and animations are effortlessly smooth to the point where it feels like icons and images are literally being moved by your fingers. Switching to another display—even something like Google’s 90Hz Pixel 4—feels like there’s a sticky coating covering the screen by comparison.

Charged up and ready to go

The OnePlus 8 and 8 Pro are very big phones, but at 6.55 and 6.78 inches, respectively, they’re not nearly as unwieldy as the Galaxy S20+ and S20 Ultra. You’ll likely need two hands most of the time, but thanks to the thinness and aspect ratio, I never felt like I was going to drop them—a regular occurrence when using the S20 Ultra—and I didn’t need to invent a funky grip to handle them. And I’d be remiss if I didn’t call out the haptic system, which is among the best I’ve ever used—strong enough to feel in a pocket but subtle enough to not be distracting.

The finishes on these phones are stunning as well. If I had to pick a favorite, I’d go with the OnePlus 8 Pro’s matte deep “ultramarine” blue, which feels as good as it looks, but the iridescent “interstellar glow” on the OnePlus 8, which looks a lot like the Galaxy Note 10+’s Aura Glow, is just as gorgeous. The bumps are a bit large, particularly on the 8 Pro, but they’re so pretty, it’s a shame to cover them up with a case.

It probably goes without saying that performance is through the roof on these phones but I’ll say it anyway: performance is through the roof on these phones. You’re getting the latest Qualcomm Snapdragon processor, oodles of RAM, UFS 3.0 storage, and the impressively lightweight Oxygen OS, not to mention giant batteries and insanely fast charging. Add to that Turbo Write and Host Performance Booster that taps into the upper echelon of the UFS 3.0 storage and RAM Boost that predicts which apps you’re most like to use to limit load time, and you’ve got one of the fastest, smartest phones around.

I haven’t done full benchmarking yet, but even with the 120Hz screen turned on on the OnePlus 8 Pro, I haven’t had any problem getting through a day. That’s due to OnePlus’ smart dynamic refresh rate technology that dials the refresh rate back when you’re doing something that’s unlikely to involve touch, such as watching a movie or reading a lengthy article.

But the biggest breakthrough with the OnePlus 8 isn’t battery life, it’s charging. For the first time, OnePlus has brought wireless charging to its flagship phone, but it’s not the 7.5W speeds in the iPhone 11 or even the 15W speed that the Galaxy S20 can reach. The OnePlus 8 Pro can wireless charge at a whopping 30W, faster than most wired chargers will deliver. Granted, you’ll need to buy OnePlus’ bulky and loud wireless charging stand for $70 to reach those speeds (otherwise you’ll be getting 5W), but it’s impressive nonetheless.

Like all smartphone makes, OnePlus has beefed up its camera on the 8 and 8 Plus as well, adding a fourth camera to the OnePlus 8 Pro and pumping up the 8’s system. Let’s compare the tech specs on the new phones to the models they’re replacing:

The fourth camera on the 8 Pro is a strange one, bringing the filters that are usually commonly by software—matte, vivid, black and white, and photochrom to a hardware level. I didn’t see much of a difference between the photos I took with the OnePlus 8 Pro’s hardware filters and the OnePlus 8’s software ones, but it’s certainly a unique feature.

In my testing so far, I’ve found the OnePlus 8 to overly saturate pictures while night mode on the 8 Pro still pales in comparison to the iPhone and Pixel. However, there’s still time for an update between now and the April 29 ship date, especially if OnePlus wants its phones to be full-priced alternatives to the iPhone 11 Pro and Pixel 4.

But OnePlus can’t hide its flaws behind ultra-low prices anymore. With loads of new features and price tags as high as Apple’s, Samsung’s, and Google’s flagships, OnePlus is announcing that it’s ready to go to war on a new battlefield. And it’s packing some serious firepower for the fight.