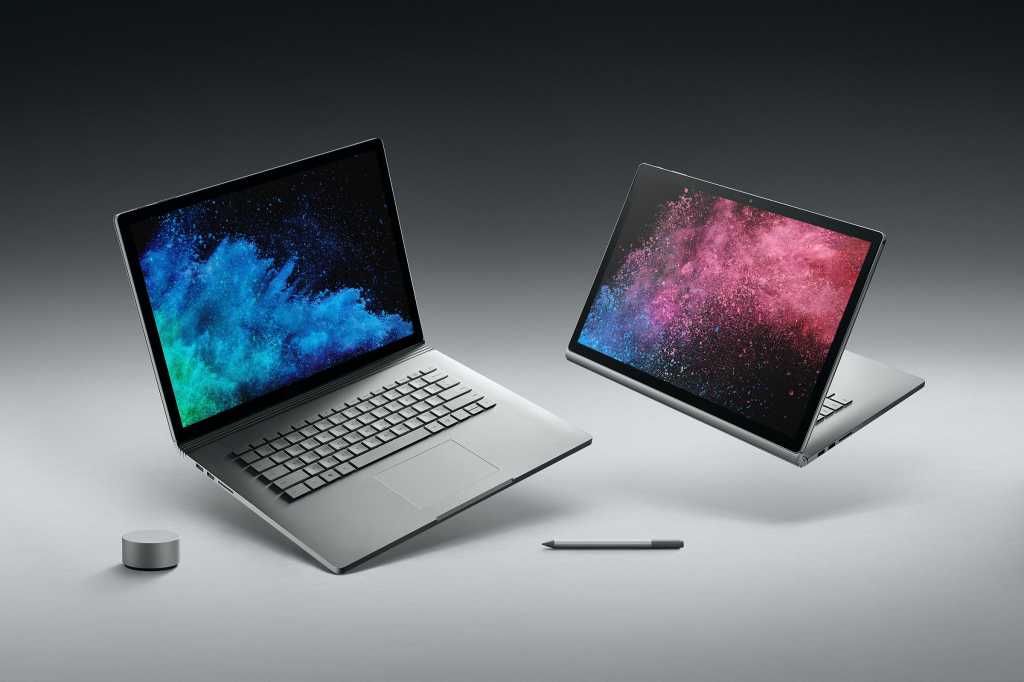 Editor’s Note: On April 21, sources close to Microsoft said that the first of these Surface devices will now be launched in early May.

We’ve known for a while that Microsoft plans to launch the powerhouse Surface Book 3 and ultramobile Surface Go 2 sometime before the end of May. But what will be inside Microsoft’s new devices, exactly?

We’ve rounded up what’s leaked and what’s been rumored about each device. We’ve been told that the launch was pushed back a bit because of the coronavirus, and Microsoft’s fears that it wouldn’t have enough finished product to stock store shelves. No one’s been able to pin down a shipping date yet, though it’s sure to be within the near future if these leaks are to believed.

Like the original Surface Book 2, we’ve been told that the Surface Book 3 should ship in two different configurations, with 13.5-inch and 15-inch displays.

We also haven’t seen any indication that the Surface Book 3 will differ radically from its predecessor—a convertible 2-in-1 whose screen can be undocked as a separate tablet, though without the kickstand of the Surface Pro series. That design is unique to the Surface Book (and the erstwhile Porsche Design Book One), and that comes with other benefits, namely two discrete batteries—one in the base, and one in the tablet portion—providing plenty of battery life. Microsoft’s Surface Book 3 is also the only Surface that has a discrete GPU, a feature that’s expected to carry over to the Surface Book 3.

What will be inside? According to Winfuture.de, which claims to have uncovered several dealer configurations for the European market, the 13.5-inch version of the Surface Book 3 will be powered by either the Intel Core i5-10210U (1.6GHz, 4.2GHz turbo) or the Core i7-10510U (1.8GHz, 4.9GHz turbo).

Both of Intel’s chips are quad-core, eight-thread 25W Comet Lake chips optimized for clock speed, rather than all the bells and whistles of their “Ice Lake” cousins. They have basic UHD graphics inside of them, but will be optimized to work with discrete GPUs.

The listings Winfuture.de uncovered offer no real memory or storage surprises: RAM options may include 8GB, 16GB and 32GB, while SSD options may include 256GB, 512GB, and 1TB. That’s roughly the same as Microsoft offered as part of the Surface Book 2, though those machines offered just 8GB and 16GB memory options.

Unfortunately, there’s no word about what type of memory Microsoft will offer, though the Comet Lake chips support both DDR4-2666 and LPDDR3-2133, according to their specifications. Either would be a bump up from the 1,866MHz DDR3 memory used by the Surface Book 2.

We don’t know nearly as much about the GPU, however, and that’s because we can’t be entirely sure how Microsoft is positioning the Surface Book 3. In years past, devices like the Surface Pro 6 have been marketed in both consumer and business configurations, mainly differentiated by the use of Windows 10 Professional for the Business version. The hardware, however, has been otherwise identical.

That may change. Both WinFuture and Petri’s Brad Sams have suggested that the most powerful Surface Book 3 options will include an Nvidia Quadro GPU, a workstation-specific GPU in keeping with the Surface Book’s role as a workstation-esque laptop. Sams also reported that Nvidia’s 16xx-series GTX GPUs would be offered elsewhere in the lineup.

Both reports would be consistent with one another if Microsoft offered both a Quadro-powered version of the Surface Book 3 for developers or business customers, and a more traditional GTX option for consumers. Neither, unfortunately, would max out the Surface Book lineup with Nvidia’s exciting RTX ray-tracing GPUs.

According to Dr. Windows, Microsoft has replaced the miniDisplayPorts on the current Surface Dock with USB-C. Two more USB-C ports replace the USB Type A ports on the front. But Microsoft hasn’t substituted USB-C for USB-A entirely. Reportedly, there are still two USB-A ports on the back, plus ethernet, an audio jack and a Kensington lock.

What we don’t know is whether the USB-C ports are Thunderbolt-enabled. On the other hand, each USB-C port should be able to power a 4K/60 display, the site reports. All that’s good news for a Dock whose connectivity had become quite stale.

If you wanted a compact, ultraportable Windows tablet, the original Surface Go was an excellent choice. Its performance was not in the least competitive with anything else in the Surface lineup, though. Now, the Surface Go 2 has reportedly shown up at the FCC, a good sign that it’s about to launch soon. Its predecessor is also out of stock on Microsoft’s site.

Microsoft appears to be designing the Surface Go 2 in the original’s image: portability first, performance second. LTE, thankfully, appears to be an option at some point.

Sources including Winfuture put the Surface Go’s screen size at about 11 inches, with a resolution of 1,800×1,200 pixels—a possible bump up from the 10-inch display of the Surface Go. (Smaller bezels? Possibly.) Otherwise, expect the same tried-and-true tablet with a kickstand behind it, paired with a Type Cover. (Hopefully the Surface Go’s typing experience has been improved as well.)

Though the Surface Go 2 will almost certainly be offered in a single physical configuration, you’ll reportedly have a choice of processors: either the Pentium Gold 4425Y or the Core m3-8100Y. Neither chip is particularly powerful. The dual-core, four-thread 6W Pentium Gold runs at a fixed speed of 1.7GHz, while the dual-core, four-thread Core m3 runs at 1.1GHz but powers up to 3.4GHz turbo under load. The latter chip, of course, should offer a great deal more performance.

Prices could start as low as 500 euro or $550, according to the dealer prices WinFuture saw, to just over $1,000. Because the Surface Go shipped with a Type Cover as part of the bundle, it’s likely the Surface Go 2 will do the same, saving you a few bucks.

Correction: The listings for the Surface Book 3 attribute an Nvidia Quadro GPU inside, not an Nvidia Tegra GPU.