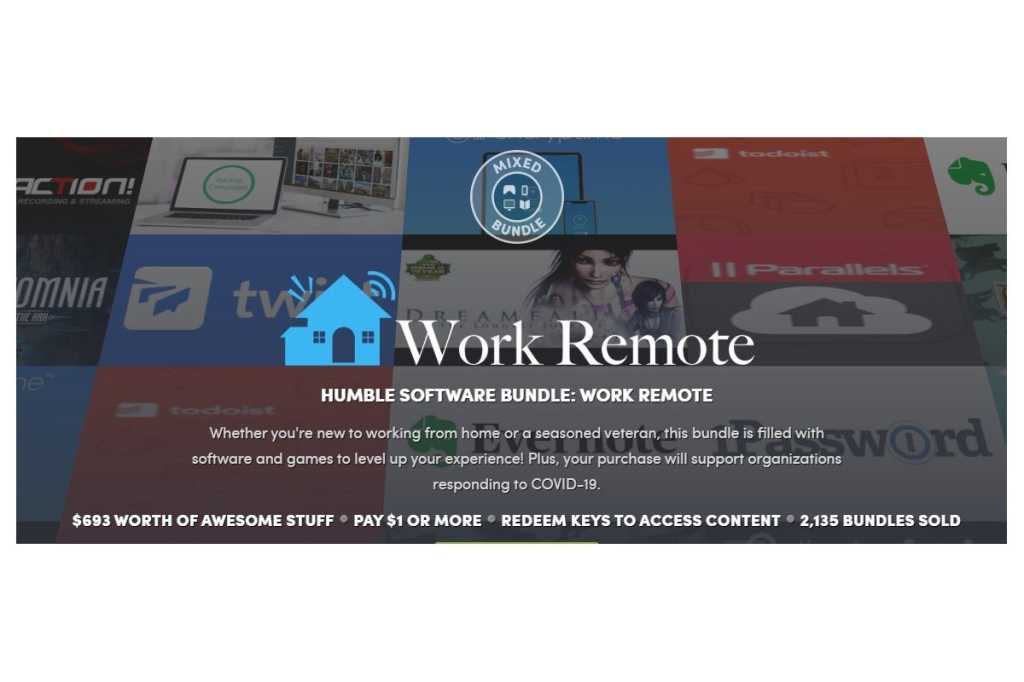 Humble Bundle is getting into the work from home spirit with a new software bundle that’s a little bit productivity and a little bit entertainment, because all work and no play makes Homer something something. The Humble Software Bundle: Work Remote will be available until May 6, and a portion of the proceeds go towards a number of charities including Partners in Health, DirectRelief, Save the Children, and ShelterBox. At purchase time, you can also nominate a charity of your choice.

Like all Humble bundles, this one contains several payment tiers, with new software unlocking at each level. Here’s what the Work Remote bundle includes.

At the $1 level you get a one-year subscription to Parallels Access (new subscribers only), which is a remote access program for accessing your Windows or Mac files on Android or iOS devices. This tier also offers three months of Evernote Premium (new and basic users only), and the game King of Dragon Pass (Steam account required).

Moving up to the second tier, paying more than the average donation (currently $10.98) gets you even more—especially more gaming. The tier includes the base game of Warhammer 40,000: Space Wolf (on Steam), a squad-based strategy card game. This tier also has a number of DLC offerings for the game, including Fall of Kanak and the Sentry Gun Pack. Beyond games, the tier features a six month subscription to Livedrive Backup (new subs only, again), and a three-month subscription to Todoist Premium, a full-featured organization tool.

Finally, we’ve got the top tier, where paying $20 or more gets you a one-year subscription to Encrypt.me VPN, WordPerfect Office X9 (yes, it’s still around), $150 credit to messaging app Twist’s Unlimited offering, Action! gameplay recording and streaming software, and the superb DisplayFusion for customizing a multi-monitor setup. The tier also has two more Warhammer 40,000 Space Wolf DLCs, including Saga of the Great Awakening and Sigurd Ironside. If that’s not enough gaming, this tier also includes Dreamfall: The Longest Journey and Insomnia: The Ark, both of which are redeemable on Steam.

That’s a whole lot of work and fun bundled into three tiers of awesome.