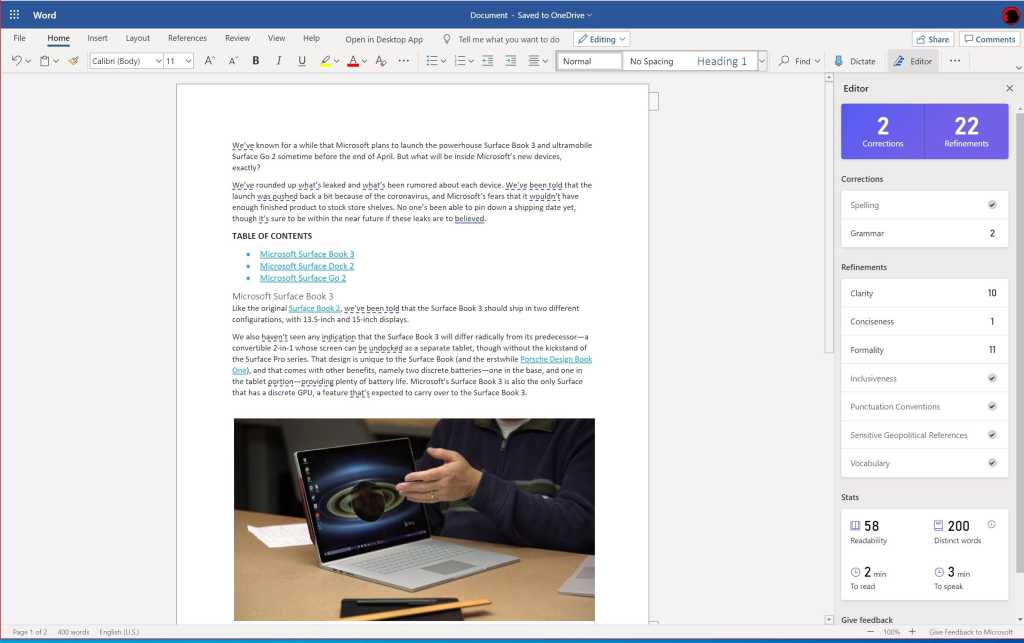 Microsoft’s conversion from Office 365 subscriptions to Microsoft 365, beginning Tuesday, will be accompanied by features that will be rolled out over the coming months. But there’s an exception that’s already available: Microsoft’s new Editor for the online version of Word, which provides a handy dashboard of suggestions to improve your writing.

Editor is also available as a plug-in for Google Chrome or the “new” Microsoft Edge browser, too, which may be even handier for those working with a variety of apps.

Editor is both a rebranding and an improvement over similar tools found earlier in Word Online: 2014’s Insights added context via Bing, while 2019’s Ideas for Word integrated much of the functionality included in Editor. Editor, though, consolidates much of this into a new dashboard format, allowing you to step through individual words and phrases and make whatever changes are necessary.

Editor is part of Word’s toolbar and shows up by default when you open a new document. Editor is also accessible when you click the Home tab in Word’s toolbar. Either way, you’re free to use Editor as you write, or cut-and-paste a finished draft into Word Online’s Editor to evaluate its quality. Simply click the Editor button, and Word’s cloud-powered AI tools will process your draft in just a second or two.

How Editor assists your writing

A large purple scoreboard tallies your obvious errors (“Corrections”) as well as suggested Refinements. Oddly, clicking the scoreboard does not begin the editing process. Instead, clicking each subheading—Spelling, for example, and Grammar—will begin highlighting the words or phrases that could use improvement.

Click at the top of your document to tell Editor to start its suggestions from the beginning. At each suggestion, you’ll need to the click the small left or right caret (“>”) to skip to the next suggestion. Clicking the small ellipsis menu provides additional options, such as ignoring a deliberately misspelled word through the entirety of the document.

Finally, Editor is also politically correct. Editor leads you away from overly gendered language, or “sensitive geopolitical references,” such as referring to the Republic of the Union of Myanmar as “Burma.” It will also suggest that you double-check the position of punctuation inside or outside quotations, knowing that this may vary between the Queen’s English and American conventions.

Keep in mind that Microsoft’s Editor isn’t the definitive arbiter of how you should write. As my editor points out, language evolves. Professional writers joyfully wade into passionate attacks (and defenses) of the Oxford comma. I remain convinced that “Mbits/s” more effectively conveys “megabits per second” than “Mbps.” Running William Faulkner’s “The Bear” through Editor would probably crash Microsoft’s server. I found it interesting, for example, that Editor’s recommendation to shy away from contractions contradicts Microsoft’s own online style guide. No matter. Word’s Editor function is a quick, handy reference to improve your writing.

Updated on March 24 to note that Editor is available as a plug-in for both Google Chrome and Edge.