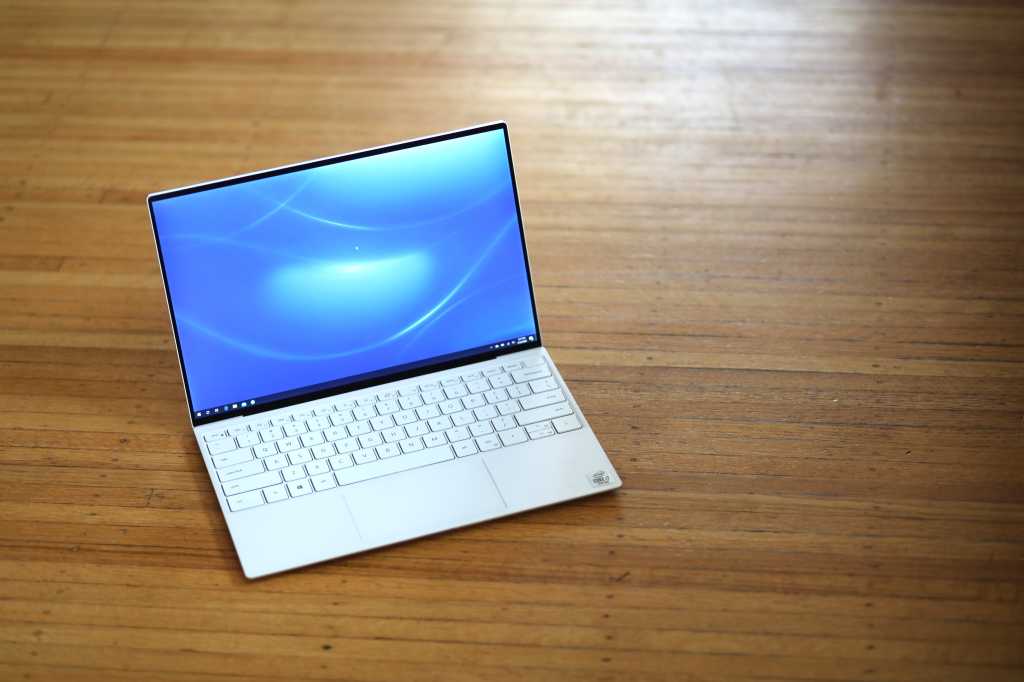 Dell’s XPS 13 9300 takes a step back in performance, but its beautiful screen, small footprint, and near-perfect size still make it one of the best ultraportable laptops.

With Dell’s XPS 13 9300, you can mark a momentous date in laptop history: the death of the laptop bezel. Previous models killed the top and sides, but that last useless part has stuck around until now.

Dell’s XPS 13 9300, however, kills that bottom bezel dead. More importantly, the smaller bezel makes the XPS 13 possibly one of most compact laptops around.

The story of the XPS 13 is a long and storied one at this point. When the first “InfinityBezel” version hit the scene in 2015, it set the trend for what could be done in a tiny laptop, forcing competitors to reevaluate their designs. The latest XPS 13 9300 ($1,749 at Dell.com) may not move the ball forward much in performance, but its 16:10 aspect-ratio InfinityBezel touch screen and dual biometric inputs still make a difference.

This review is part of of our ongoing roundup of the best laptops. Go there for information on competing models and how we tested them.

Lest you think we’re raving about an inconsequential feature, you just have to look back to 2017, when companies were still selling laptops with so much bezel, you could sell billboard space on them. Apple’s 2017-era MacBook Air, for example, looks about as fashion-correct as disco-era bell-bottom pants and wide-lapel paisley shirts would seem during the grunge era.

For the new XPS 13 9300, Dell wisely eschews the common, narrow 16:9 aspect ratio that lowers the overall height of the screen. The company instead goes with a taller 16:10 aspect ratio for the 13.4-inch screen. The top of the screen is about the same height as that of a more conventional 16:9 laptop, such as the HP Elite Dragonfly, giving you more screen real estate without increasing the size of the laptop.

The screen itself is a beautiful 450-nit IPS touchscreen. When we say IPS, we mean actual Sharp IPS too, not the “IPS-like” or “wide-viewing angle” language companies use to describe copycat versions. This is a beautiful, top-quality display that will help you stay productive.

While the display is clearly the star of the XPS 13 9300’s configuration, it offers plenty more top-shelf parts in its slender chassis. Here are the details.

One of the better moves Dell takes with the XPS 13 9300 is to stick with a traditional dome keyboard. Although its cousin the XPS 13 2-in-1 is slightly thinner because of its MAGLev 2 low-travel keyboard, it’s a controversial feature. Keyboard feel is subjective, but let’s just say our fingers prefer more travel in our keyboards.

The keys are about 0.75mm wider than the keys from the previous XPS 13 7390’s. They also seem to be a little flatter. Overall, we think it’s an improvement. The trackpad is glass-smooth and support Microsoft’s Precision touchpad drivers. We essentially have no complaints here.

How the world has changed around webcams. Once valued as much for the features that hid them, such as physical shutters and hardware cut-off circuits to maintain privacy, we now clutch webcams to our chests like solid-gold bars.

So yes, webcam performance suddenly matters again. Most models you’ll find use the 720p resolution, but that doesn’t mean they’re all the same. Some vendors, including Dell, may employ software tricks to enhance 720p video quality. Others, including Apple, appear to be caught flat-footed with inferior 720p output. While a 1080p webcam may seems like a desirable upgrade, remember that the higher resolution creates a larger data file—which may end up getting compressed by applications such as Zoom anyway.

We compared the XPS 13 9300’s webcam module to that of six other laptops, including HP’s Elite Dragonfly and the Dell XPS 13 2-in-1 7390. All feature 720p cameras, and all performed adequately. We’d give the Elite Dragonfly Elite a slight edge. Most of the webcams produced overly compressed imagery typical of their tiny sensors and optics. In the end, the XPS 13 9300 produces perfectly fine video for your Zoom videoconferences.

We’ll kick off the benchmarks with Maxon’s Cinebench R15. It’s a standalone benchmark that measures CPU performance while rendering a 3D image. While it’s not a task many will do on an ultraportable laptop, it’s still a good way to gauge multi-core performance.

Luckily, the most mundane work on ultraportable laptops mostly use just a single core on the CPU. We measure that performance using Cinebench R15 again, set to a single thread. Here, the higher clock speeds of the 10th-gen Core i7-10710U in the XPS 13 7390 still take it higher (coming close to the much heavier, much faster Dell XPS 15 7590), but we’re looking at only a 7-percent gap compared to the XPS 13 9300. Most people would never even feel that.

One issue with Cinebench and other similar tests is the short run times. Because modern CPUs rely on boosting clock speeds for short periods, a benchmark that’s too brief doesn’t tell you how a laptop might run on a lengthy all-core load.

To test that, we use the free HandBrake encoder to convert a 30GB movie file using the Android tablet preset. On most quad-cores, you’re looking at 50 minutes of running the CPU hard. Performance of the XPS 13 9300 is in line with that of most 10th-gen Core i7-1065G7 laptops.

To measure a conventional workload, we use UL’s PCMark 8 Work test. Suddenly the more modern 10th-gen Core i7-1065G7 chips lead the pack, but the margins again are narrow. Remember, if all you do on your laptop is “normal” stuff, don’t get too wrapped up in the performance metric.

While the 6-core Core i7-10710U in the older XPS 13 7390 leads in CPU tasks, one area where it falls apart is graphics. Here we see the Iris Plus graphics cores in the XPS 13 9300 offer nearly 100-percent better performance than the older XPS 13 7390. That basically mean games as well as OpenCL-based tasks will run faster.

The most important metric of any ultraportable laptop is likely its battery life. For our test, we loop a 4K video file using Windows’ Movies & TV app. We set up the laptop as if it were playing a movie on a cross-country flight. We put it into airplane mode and attach earbuds with the volume set to its midpoint. We set the screen brightness to 250 to 260 nits, which is a comfortably bright settting for an office or airplane’s daylight settings.

The overall performance of the XPS 13 9300 is quite good, with playback lasting just over 12 hours. It’s not quite as good as HP’s Spectre x360 13t, which runs to nearly 16 hours, but the Spectre has a larger battery and a “1-watt” panel.

Your mileage will vary. For the light workload of video playback, 12 hours is plenty. We should point out that if you are using Office or a browser, expect to lop off at least a third of that battery life. Push the CPU hard, and expect no more than a couple of hours or so at best. Heavy GPU use might push it under two hours.

The Dell XPS 13 9300 enters 2020 with more competition than ever. In 2015, 360-degree designs were still unproven and very rough. Today’s versions, such as the XPS 13 2-in-1, give up nothing while also offering tablet and pen functionality. The utility of those designs are so good these days, we wonder whether the days of pure clamshell laptops are reaching their end.

If we are truly coming to the end of clamshell laptops as the preference, we recognize that Dell’s XPS 13 9300 just might be the pinnacle of what can be done. It’s small, thin, and light, with a beautiful display and nearly flawless features. The addition of Iris Plus graphics erases a weakness with its predecessor. It’s one of the best laptops we’ve ever tested.

Correction: An earlier version of this story incorrectly identified the XPS 13 7390 as the XPS 13 2-in-1 7390. PCWorld regrets the error.