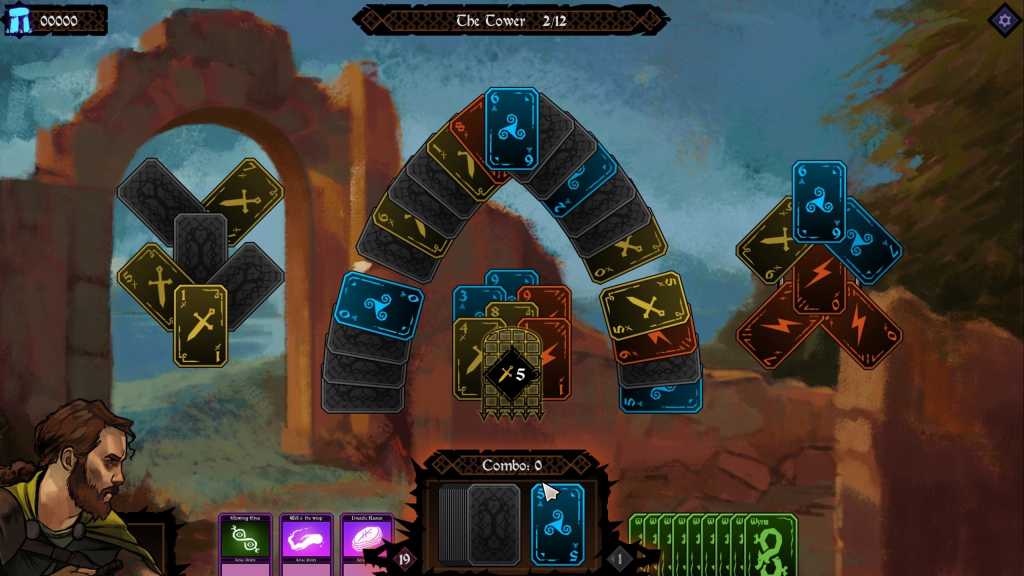 Part solitaire, part RPG, Ancient Enemy is the perfect sort-of mindless for a few lighthearted evenings of adventure. It’s like a beer-and-pretzels game you can play by yourself.

Solitaire. One of my favorite games of 2020 so far is solitaire. Here’s a card—now stack another on top of it. That’s it. Mindless, or maybe just mindless enough. Fwit, fwit, fwit, the sound of the cards stacking on top of each other as I go on a run, my combo meter climbing higher and higher. And then because this is fancy solitaire I unleash the combo as a bolt of lightning into the face of a strange skeleton-witch.

Then it’s onto the next level, and onto the next run, and oh god I can’t stop playing Ancient Enemy. Is this the next manifestation of my Globesweeper and Pictopix addiction? It certainly feels that way.

Ancient Enemy is the latest from Grey Alien Games, developers of Regency Solitaire and Shadowhand. The former—which I did play—couched fancy solitaire card puzzles in a story of British courtly intrigue. Shadowhand—which I didn’t play—then introduced a battle mechanic. You’d play solitaire, and in doing so charge up attacks you could aim at your enemies.

As I said, I didn’t play Shadowhand, but I get the feeling Ancient Enemy is just another iteration of these same ideas. It keeps the card battling system, maybe refines and streamlines it a bit. There are three suits—yellow, orange, and blue—and each charges a different attack. Yellow cards let you use your dagger for minimal damage. Orange cards power your magic attacks, which are usually more effective. Blue is used for defense.

Stringing together chains of cards builds a combo meter, which increases the efficacy of these actions. And then you have a few abilities you can use in a tight spot, i.e. to remove a card blocking your advance or change the number on a card to something more useful, and thus keep a combo going.

That’s it. Those are the basics, and even if you only played Regency Solitaire you’ll find much of it familiar. Most of the special abilities return for this third outing in some form. Hell, Ancient Enemy even uses the same sounds as Regency Solitaire when you play a card or unlock a gate.

I can’t stop playing. I’ve made it through the entire map already, and now I’m tempted to go through again.

As I said, it’s just mindless enough—something to keep your hands and surface-brain occupied for an hour or two at a time. And that would be explanation enough for why Ancient Enemy works, just as it explained Regency Solitaire’s popularity.

I suspect there’s more to it though, because Ancient Enemy isn’t as “random” as it first appears. Part of the frustration of playing solitaire in the real world is that cards are chaotic. What’s that statistic? There are more combinations of a 52-card deck than there are atoms in the universe? Something like that.

Point being: You can get better at solitaire, but you’re still likely to lose. The odds are against you.

Having returned to Regency Solitaire briefly after finishing Ancient Enemy, it’s less random than real-world solitaire—but feels every bit as punishing. Puzzles are solvable, but there’s usually one “right” way through in Regency Solitaire. Choosing to flip Card A instead of Card B may render the game unwinnable.

Ancient Enemy stacks the deck in the player’s favor. The best part of Regency Solitaire was finally finding the groove and getting a combo going. In Ancient Enemy, that happens every single turn. 20, 30, even 40 card combos are common, as you chip and chip and chip away at a layout. If you reshuffle the board, you’re guaranteed to have a move. If you use the spell that changes a card to another number, most of the time it seems to land on the number you want.

“Random” isn’t all that fun. Ancient Enemy gets its hooks in because it feels like you’re always outsmarting the game—even though I suspect that’s exactly what it wants you to think. Destroying a creature in one turn when the game sets the par at four? Rewarding. Far more rewarding than clicking through the deck one card at a time and never getting anywhere.

I’m loathe to call it a “puzzle game” because that feels a bit generous. It’s puzzle-adjacent though, like Tetris or Bejeweled. There’s enough depth to keep Ancient Enemy interesting, but not enough to get lost, and that’s precisely where I like to reside somedays. (See also: My incessant praise for the aforementioned Globesweeper.)

It helps of course that Ancient Enemy makes art from cards. This is another skill Grey Alien picked up with Regency Solitaire and perfected here. The boards you’re solving are gorgeous, forming arches and runes and rope-like latticeworks. Ancient Enemy tells stories in the smallest details.

And of course there’s the actual story, of a world plunged into darkness and a mage trying to heal it. I don’t think it’s as immediately captivating as the lighthearted courtship of Regency Solitaire, but it gives the game some much-needed structure, grounds its various otherworldly enemies in its world, and keeps the puzzles interesting to the last. That’s about all you could ask for a story written around a solitaire game.

There are some strange decisions. Your dagger, for instance, never really gets better. By the end of the game it’s practically useless compared to your spells, which can hit for three or even four times as much damage. I think there are a few too many repeat enemies, as well. The first time you see the hooded thief guy, it’s intriguing. The sixth time he shows up, less so. I wish there were a bit more emotional weight to some of the battles.

Still, I really enjoyed Ancient Enemy. Maybe it’s a time-and-a-place enjoyment, a sign of the types of games I’m looking for during [gestures around] all this. That’s okay though. For the eight or so hours it lasted, I found I couldn’t put it down. Indeed, I’d often load it up saying “I’ll only play one or two levels,” and then find I’d finished an entire chapter in a blur of cards and combos.

If that sounds like your idea of a good time? It’s hard to think of something better than Ancient Enemy—or Regency Solitaire, and probably Shadowhand for that matter as well. Hell, maybe that’s the next game on my list, now that I’ve defeated the titular enemy and restored this realm.