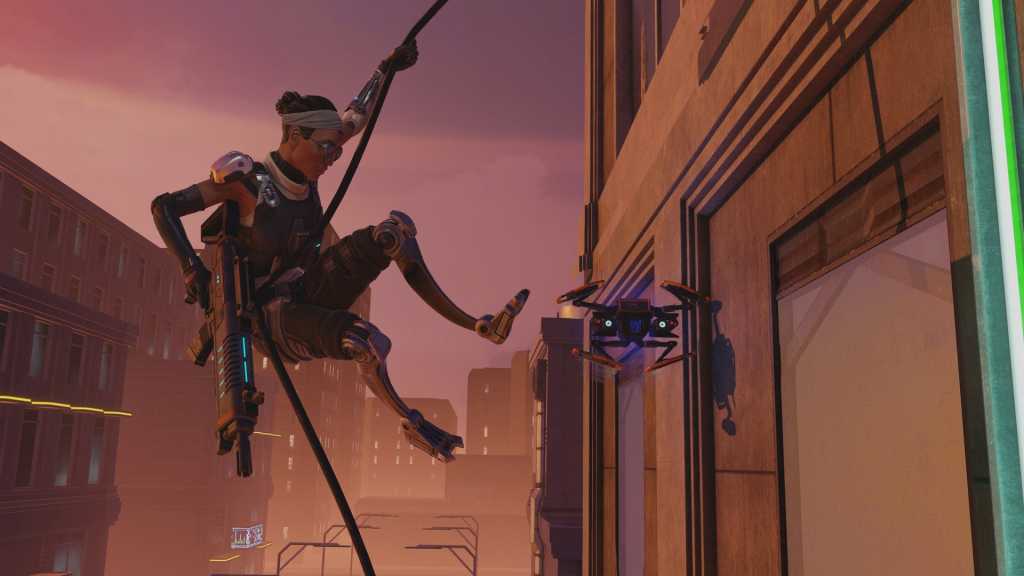 If XCOM and SWAT had a baby, XCOM: Chimera Squad would be it. This refreshing spinoff looks like XCOM, sounds like XCOM, and even largely feels like XCOM. But it also feels tremendously different at the same time, thanks to a much tighter focus and experimentation with some of the series’ fundamental design tenets. As a longtime series fan with hundreds of hours invested in various XCOM campaigns—the mod’s called Long War for a reason, friends—I’m really grooving on this remixed take.

The previous XCOM reboots took place on a global scale, complete with satellite deployments and managing international relations. Here, all the action takes place in City 31’s nine districts. Set in the wake of the Advent War and the Elders’ departure, City 31 is a turbulent place where humans, aliens, and hybrids live side-by-side. Not everyone is satisfied with the arrangement, to say the least. You need to manage surging levels of unrest in each district to keep anarchy at bay (hello, reimagined Avatar Project!), and investigate resistance groups trying to overthrow the new world order. That’s where the titular XCOM: Chimera Squad fits in.

Freshly arrived in City 31, your Chimera Squad consists of several agents, alien and human alike—and in a stunning departure for the series, they aren’t randomly generated characters. You can’t customize your soldiers, form battle-tested bonds with your squad via acts of against-all-odds heroism, or finely tune the capabilities of your warriors to create specialized, rotating squads equipped to handle different scenarios. Instead, you select from a roster of existing XCOM operatives with unique roles rather than the XCOM series’ usual Big Four classes.

Each operative also packs their own unique personality. And even though Chimera Squad might not feel like your squad, well, it still feels like your Chimera Squad. The game leans into giving each member of the squad their own personality via animated comic book-style cutscenes, fleshed out further via inter-squad chatter throughout missions and while you’re studying the strategic map. The voice acting isn’t spectacular, but the actual writing for each character doesn’t disappoint. Sometimes, the home base banter hits with surprising poignancy.

The addition of fully fleshed-out characters imbues Chimera Squad with personality that XCOM traditionally lacks, and distinct squadmates help reinforce the tighter, closer feel that the game strives for. It’s you against anarchy with your cop buddies.

Having established characters requires the end of another XCOM mainstay, however: permadeath. In proper XCOM games, soldiers stay dead when they die. Every XCOM veteran can spin tales about the high-ranking grenadier who sacrificed himself to bring down the cover around a key objective, or the ranger that died after trying to punch a Muton on the face, or the desperate retreat that degenerated into a full-on squad wipe. Those moments are what give XCOM life—what turns a handful of randomly generated characters that you gave silly names into your squad.

That tension’s gone from Chimera Squad, and I miss it. A squad wipe here simply forces you to replay the mission (unless you’re playing in hardcore mode) rather than scramble with the loss of dozens of hours of investment into your characters and weapons.

That said, I appreciate the middle ground Chimera Squad treads. If one of your squadmates goes down and you don’t manage to stabilize their condition mid-mission, there’s a chance they’ll get a “scar” that impairs them, leading to devastating stat reductions. Those reductions can be removed only by having that agent spend a few days in a training facility—essentially learning how to work around a bad shoulder or whatnot. Any damage that your operatives take mid-mission will only be half-healed in the next one, too, so you can’t just run around guns-blazing without consequence. With a much more limited roster, that all matters.

If we’re talking about death, we need to talk about XCOM: Chimera Squad’s most radical adjustment: how it handles the turn-based tactical battles.

In previous XCOM games, you moved your entire squad, and then all of the aliens took their turns. The team-based turns let you set up elaborate traps or hunker down in the face of an anticipated alien onslaught—cohesive, comprehesive tactics for your entire group.

Chimera Squad switches to a Dungeons & Dragons-style interleaved turn order instead, with XCOM operatives and opposing forces moving individually instead of in groups each round. Some enemies will be able to act before certain members of Chimera Squad, with the turn order visualized in a timeline on the edge of the screen (shown in the screenshot above). Rather than having your whole squad focus on a single threatening enemy during a group turn, you now need to consider which units move when, and prioritize your movements and actions accordingly.

Interleaved turns wouldn’t work in a proper XCOM game. If XCOM 3 happens, I hope it returns to group-based tactics. But it works in Chimera Squad, because the entire game’s been constructed around the idea.

As opposed to the wide-open maps in the main XCOM entries, Chimera Squad’s missions essentially consist of several smaller, much closer-quarters spaces. Each conflict begins with a “Breach” phase, where you’ll divide your squad of four chosen agents among various doors, windows, and air vents—some entries require specific characters equipped with specific equipment—then burst into the room in a dramatic fashion. Certain entrance points include various combat modifiers, such as increased accuracy or, on the flip side, greater odds that you’ll absorb fire in return.

Click the Breach button, and your squad all rushes in at once, giving you the drop (and a free action) on the bad guys. Time slows to a crawl, the screen blurs, and the camera plunks itself down behind the shoulder of your first operative, who can take an action before it moves behind the shoulder of your next agent, and so on. It feels great, and it’s wonderfully cinematic.

The initial breach is also tactically important. While some enemies will be taken by surprise and thus be much easier to hit, other enemies won’t be. Ones that are aggressive—marked by a red icon in your visible enemy list—will even take return fire at your squad after your finish your free breach actions. That means you might want to let less-aware, easily hit enemies live for now to focus your your squad on aggressive or especially dangerous foes first.

Characters also have other abilities they can use instead of firing during a breach. Cherub, a relentlessly cheerful non-indoctrinated hybrid, packs a particularly useful one that tells him to hunker down with his shield, which harmlessly draws fire from alert enemies. It’s great if you find yourself in a hairy breaching situation.

After the breach phase ends, any remaining alert enemies fire on your squad, XCOM scrambles to cover, and the proper tactical battle begins. The tighter rooms mean you generally have a higher chance to hit than in other XCOM games, which helps make the interleaved turns feel more manageable.

The various squad members each get unique abilities they can use on their turns, and many of them work well in combination with specific abilities from specific squadmates, which makes turn management even more crucial. How you position your squad during the breaching phase affects turn order, while certain special abilities also grant extra moves. Once per mission—not per room or turn—your team can activate “Team Up” to give a chosen ally the next turn. It can be a godsend when RNGsus frowns upon you, so don’t blow it early.

Combat in Chimera Squad feels much faster, much more fluid, and much more chaotic than in other XCOM games, while still scratching that tactical action itch the series is famous for. Again: It’s good—very good—just different. And it’s an absolute blast to be able to use alien abilities finally, after falling prey to them for so damned long.

The various tweaks essentially lay another classic XCOM element to rest, however. Between the interleaved turns and character-specific abilities, the legendary Overwatch feels much, much less useful in Chimera Squad. You’re almost always better off taking a shot, deploying an action, or defensively using Preparation (Chimera Squad’s Hunker Down equivalent) than relying on Overwatch’s reactive capabilities—a lesson I learned the hard way in the game’s early missions. After hundreds of hours playing mainstream XCOM games, clicking Overwatch is muscle memory.

As a long-time series veteran, I was skeptical coming into XCOM: Chimera Squad. Yes, I was excited for another chance at XCOM, but the departures seemed too radical on paper. Now that I’ve played it, I’m in love with the streamlined experience it offers.

Every element of the game has been tuned to make it feel like being a cop in an alien city, from the established squadmates to the smaller maps to the interleaved turns and the oh-so-cinematic Breach mode. You can even play Chimera Squad non-lethally, choosing to subdue opponents instead of slaughtering them. Doing so even grants you valuable Intel resources to help on the wider strategic level. You know, because you can’t interview corpses.

If Chimera Squad were XCOM 3, I wouldn’t like it. As a spin-off, it shines, implementing bold, clever changes that make the game its own uniquely enticing thing rather than just another XCOM rehash—while still somehow managing to keep that delectable XCOM vibe throughout. Fingers crossed we’ll see more experiments like this in the future, building on the XCOM brand in ways that make much more sense than the disastrous The Bureau: XCOM Declassified did.

I also couldn’t recommend the game at $60—but XCOM: Chimera Squad costs just $20, or a mere $10 if you buy it before May 1 (possibly to juice sales before Microsoft’s XCOM-like Gears Tactics launches next week). It’s an absolute steal at that price. There’s a surprising amount of game here—about 20 hours per campaign, though I still haven’t beat it—and Firaxis bolstered Chimera Squad with full-blown mod support on Steam, just like it did with XCOM 2. That game’s mods have given it legs long after it should feel stale, with some of their ideas even making it into XCOM 2’s War of the Chosen expansion. Heck, the legendary Long War mod’s 45-degree camera turns even made it into Chimera Squad. With luck, we’ll keep having fresh community-made XCOM goodness for years to come.

Bottom line: Buy XCOM: Chimera Squad, even if the revolutionary changes sound weird to you. It’s not XCOM 3, and it’s not perfect, but Chimera Squad still kicks ass in its own way, and it’s priced to move.