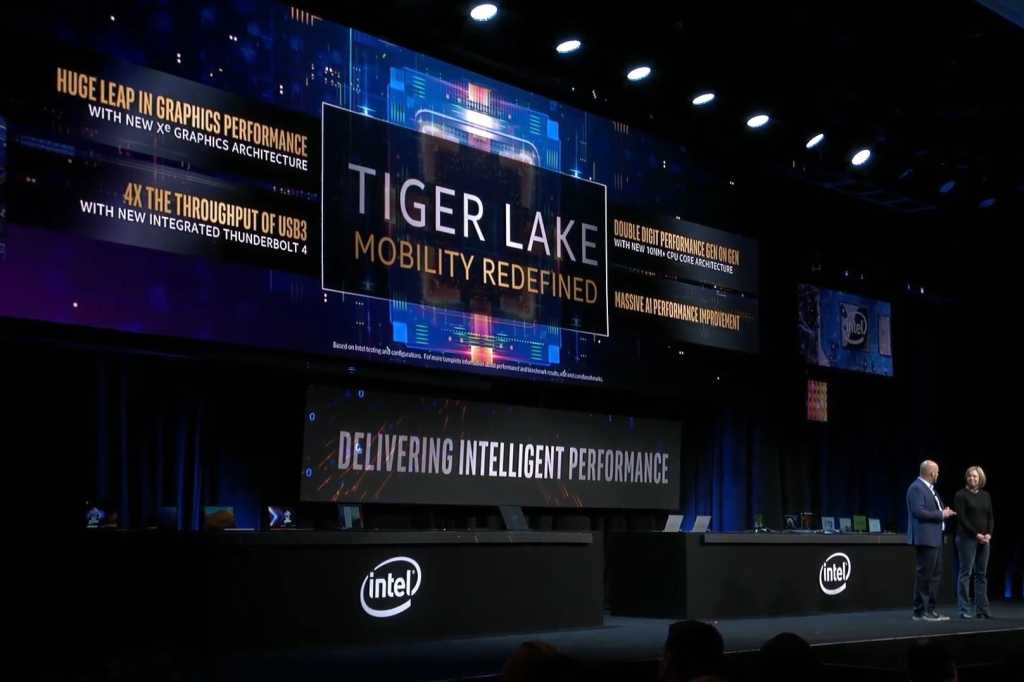 Intel overcame the early effects of COVID-19 and reported a strong first quarter of 2020, confirming that the company plans to add its next Tiger Lake processor near the middle of the year, as well as add manufacturing capacity.

Intel chief executive Bob Swan also praised his staff for remaining on duty as the coronavirus ramped up, promising $100 million in assistance to his workers including special recognition for those who reported to Intel’s facilities to keep the company running.

Intel reported net income of $5.7 billion, up 42 percent from a year ago, on revenue of $19.8 billion, up 23 percent from the same period. (Intel’s second-quarter outlook calls for revenue to drop slightly, to $18.5 billion.) Intel’s data-based businesses exploded, specifically its Xeon-centric Data Center Group, whose revenue rose 43 percent to $7 billion. The larger PC-specific Client Computing Group experienced slower growth, up 14 percent to $9.8 billion. Intel attributed the growth in DCG to strong demand for data center products and the cloud, though the company said it expects government and enterprise demand to fall off during the second half of the year.

Likewise, Intel credited the work-from-home trend in driving strong demand for notebook PCs: The sector grew 19 percent from a year ago, Intel said. (Average notebook selling prices fell by a slight 3 percent, however, probably due to bargain-seeking consumers.) Desktop PC sales fell 2 percent, though average prices climbed by 4 percent. Intel said it doesn’t expect that notebook demand will necessarily continue, however, constrained by a global contraction of GDP as the year progresses.

Next up: Tiger Lake and more capacity

“This is going to be a great launch,” Swan said. “We are very excited about it.”

Swan also said that Intel’s shift to 10nm manufacturing was encouraging. Intel is holding about double the number of Tiger Lake CPUs in reserve that it did for the prior 10nm Ice Lake processor, to avoid supply shortages. “I think that gives you an indication of just how much our performance is improving in 10nm,” said George Davis, Intel’s chief financial officer, during the call.

The coronavirus hasn’t affected Intel’s ability to try to resume a “tick-tock” manufacturing cadence, either, Swan said. Intel will be manufacturing 10nm products through to almost the end of 2021, when it will shift over to the 7nm node during the fourth quarter of 2021, he said.

Swan also said that Intel continues to invest in wafer manufacturing capacity, with the belief that Intel can go back to supplying enough processor inventory to its customers. “We remain on track to add sufficient wafer capacity this year, so that we meet market demand and restore our PC unit inventory to more normal levels,” Swan said. “Near-term PC demand has increased due to work-from-home and online learning. But the second-half demand picture is more uncertain.”

In the data-center space, Intel’s next launch will be in the fourth quarter of this year, when its Ice Lake-based Xeon launches.

Like other tech giants, Intel declined to provide an outlook for the year as a whole, noted Patrick Moorhead, principal at Moor Insights, as the long-term outlook is uncertain because of COVID-19. “But it did keep it for Q2, which I thought was pretty good,” he said.

Taking actions to fight the coronavirus

Intel appears to be hyper-aware of meeting contractual obligations and other milestones; it specifically noted that its factory operations ensured a 90 percent on-time delivery metric, and that the company had raised $10.3 billion in new debt in an effort to strengthen its financial liquidity.

Intel also established a new Intel Pandemic Response Technology Initiative to combat the virus; that includes $50 million for accelerating healthcare and scientific research, improving access to online learning, and an innovation fund for employees. Intel also said it donated $10 million to relief efforts around the globe, plus 1 million and more PPE equipment for affected workers. Intel also teamed with Medtronic and Dyson to help create ventilators, and with Lenovo and BGI Genomics to help accelerate the analysis of the COVID-19 genome. Finally, it has granted free access to intellectual property for researchers and scientists.

Internally, the “vast majority” of Intel employees are working from home, and the company spent more than $100 million to add benefits such as dependent care, Intel said.