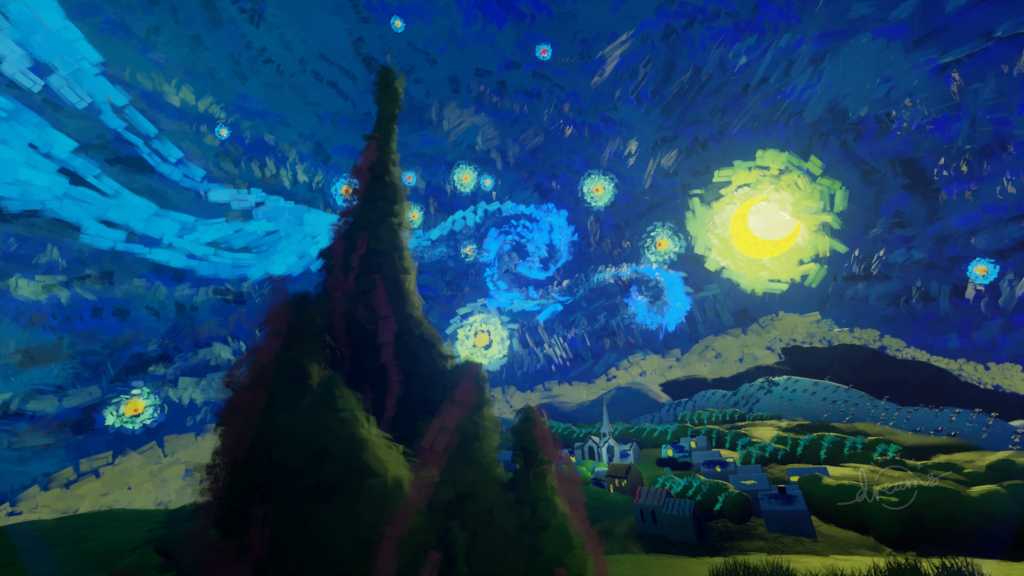 Let me say up front: I am not a game developer, and am not approaching this topic as a game developer. Call me an enthusiastic hobbyist, maybe. Inform, Ink, Unity and Unreal, Blender—I’ve played around with plenty of tools over the years, and I do it for the magic, for the moment when an idea takes shape and you go “Wow, I made this.” Finding that magic is hard though.

But it could be (slightly) easier, at least for hobbyists like myself. The past few weeks I’ve spent a lot of time messing around with Dreams, Media Molecule’s game and/or game creation suite for the PlayStation 4. Now I’ve got my fingers crossed it comes to PC.

Dream a little dream of me

It should come to PC. Dreams is incredible, and exposes how many assumptions are made with Unreal and Unity, with Blender, with all of these tools that are built first and foremost for professionals.

I’m not going to argue Dreams is a replacement for those tools. It isn’t, and I don’t think you’ll see the next Witcher built in Dreams or anything. But there’s also no reason hobbyists and small-scale developers should need to work in Blender, just like there’s no reason for you to drive a Formula 1 car down to the grocery store.

And sure, there are plenty of simpler modeling tools out there. There are engines that are more approachable than Unreal and Unity. If you’re already holding up your hand to say “Well actually,” save it. Trust me, I’ve been through a lot of tools in my pursuit of something that just lets me spin up ideas without enduring a 60-part YouTube tutorial.

There’s nothing quite so simple but powerful as Dreams. Nothing I’ve found, anyway.

It’s a one-stop shop. That’s part of the appeal. Modeling, animation, programming, music, all done within Dreams. PC development is a fragmented landscape of specific tools built for specific purposes. Blender for modeling and (if you’re unlucky) animation. Ableton or Logic or my new favorite Bitwig for music composition and recording. Wwise for sound design. Photoshop or (if you’ve got the cash) Substance Painter and Designer for texturing. Ink for the story. Everyone has a different workflow, and usually it just depends on what you’ve learned already.

These tools are powerful. More powerful than anything you’ll find in Dreams, because they’ve evolved to serve a single purpose. But does your aspiring game developer or hobbyist need all that power? Speaking as one myself…I don’t think so.

I’d already used Maya a bit in college, so I wasn’t a complete stranger to 3D modeling, but I found the entire process overwhelming. Menus and submenus and a million keyboard shortcuts all jumbled together in my head. I finished, then did another tutorial, and another, each one a multi-day affair, losing myself in normal maps and displacements and all sorts of fascinating techniques that nevertheless felt very much like learning to repair a car engine when all I originally wanted was to swap the headlights.

The other night I remade that donut scene in Dreams in an hour or so, and the hardest part was “randomly” arranging the sprinkles. Is it beautiful? Nope. It’s nowhere near as photo-real as even my original (pretty sad) donuts.

But I didn’t need to sit through five days of tutorials to do it. Dreams is—at least for this type of toolset—remarkably friendly and approachable. It encourages you to get in there and mess around, experiment, play with its tools. Do the tutorials, or don’t! Jump ahead, if you want! Lay out some levels!

Dreams still has enough depth for professionals to pull off some truly incredible work. I’m constantly amazed by the stuff I stumble on when I go “Dreamsurfing.” I saw a full English breakfast that made my stomach rumble the other day. A few minutes later I was navigating the queue for an extraordinarily detailed scale remake of Disney’s Space Mountain, and then it was off to a recreation of the opening Star Wars crawl, the kitchen sequence from Jurassic Park, a silly (but surprisingly well-crafted) parody of a scene from The Room, and a jaw-dropping homage to Fantastic Mr. Fox.

But Dreams is quietly revolutionary, in that Media Molecule’s created an engine beginners can understand almost at-a-glance. Put down a cube, scale it up, tint it green, and you’ve made some land. “Loosen” it, and it’ll look more like grass. Adjust the color of the sky by adding a simple visual representation of the sun into your scene. And I love the way it handles tutorials, with the video pinned to the corner of the screen so you can follow along step-by-step. In this case the limitations of console hardware and UI have made for something a hell of a lot more elegant than the “Unreal on one monitor and YouTube on the other” workflow I’ve used in the past.

It’s even inspired me to try disciplines I’m usually not very interested in. I find animation tedious, especially in Blender. Nothing makes me appreciate how hard game development can be like keyframes and animation cycles. Does Dreams make it easy? No, but even as a complete newcomer I feel like the tools are friendly and approachable. All you really need is the DualShock’s rudimentary motion controls to sketch in some basic animations.

Programming is the same way—and to be fair, the industry is moving towards friendlier tools for non-programmers. Unreal’s Blueprints are a great example, allowing people who don’t know a single C++ command to interact with their creations on a deeper level than used to be possible.

The Logic system in Dreams isn’t much different, but has the advantage of being both more constrained and more tactile. Logic nodes and triggers are represented in physical space, like Blueprints that hang out among your various characters and props and platforms. It isn’t the most efficient way to implement a programming layer, but has definitely helped me better visualize what I’m hoping to accomplish with each new addition.

Best of all though is the fact that Dreams supports collaboration and sharing. Not an artist, or an animator, or a programmer, or a sound designer? You can find amazing tools and creations to use in your own projects, and Dreams is smart about accrediting everyone you sourced.

There are certainly equivalents on the PC. The Unity Asset Store and Unreal Marketplace are just the tip of the iceberg as far as sourcing art and bits of programming magic for your own creations. These are professional stores though, made for professional projects. The best assets are expensive, and take up a ton of storage space on your PC. Not to mention the chore that is organizing your files in Unreal or Unity.

Again, Unreal and Unity power some of the biggest games on the planet. They need to be this way—either because it’s the only way to accomplish what’s necessary, or because decisions were made so long ago (and iterated on so many times) that it’s now impossible to change. I’m not arguing Unreal and Unity (and especially Blender) should change to accommodate hobbyists.

But I do find myself wishing Dreams would come to PC, an engine built from the ground up for people who just want to explore game development in their spare time. I don’t typically begrudge consoles their exclusives, but it’s such a shame that this incredible creation suite is locked up on the PlayStation 4, with all the limitations that entails.

Are there hiccups? Absolutely. For instance, due to the way Dreams renders objects, you can’t easily adjust the color of individual pieces of a model after they’re set. You need to paint them by hand, a painstaking process when paired with the DualShock 4’s clumsy controls.

Speaking of which: I hate the controls. I’ve gotten used to its hybrid dual-analog/motion inputs, but they’re still painfully inefficient at times. Trying to line up two edges? Or simply align a few objects to a grid? Good luck. I miss the accuracy of a mouse, and I miss those same keyboard shortcuts I complained about earlier. Dreams still has shortcuts, but they’re all gamepad Twister—hold down L1, press R2, then hold L2 to rotate, and et cetera. Give me a break.

If we’re getting Horizon: Zero Dawn on the PC, then I hope like hell Dreams follows. It’s all well and good for Sony to bring over some of its exclusive games, and I certainly hope that continues too.

Dreams has the potential to be more though. There’s a long legacy of toe-in-the-door tools, from Unreal Tournament mods to Warcraft III custom maps, Halo’s Forge and even Minecraft. Dreams could be the next “one of those,” the inspiration for a new generation of indie developers. Better even, because it combines the approachability of something like Warcraft III’s mod tools with the flexibility of a full-fledged game engine.

I can’t think of anything else like it, and I hope it gets a chance to thrive on the PC someday—with VR support maybe, so you can use motion controls when you’d like and then use a damn mouse for the rest. Hey, a man can Dreams, right?