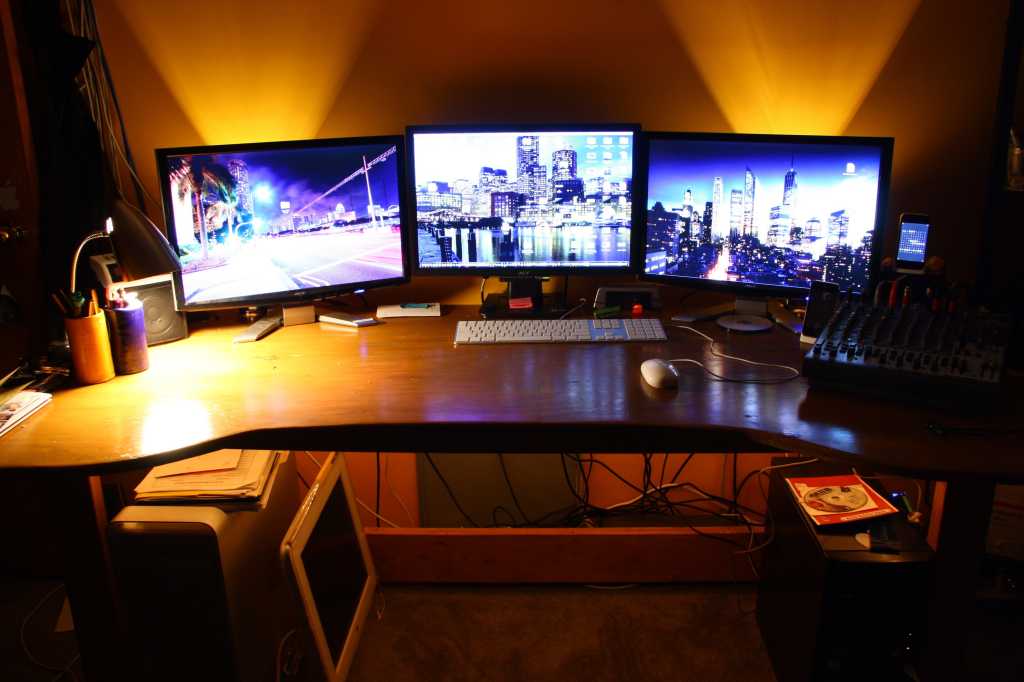 Should you buy a 1080p or 4K monitor for your home office? This is a question you’ll inevitably face, especially if you’ve been trying to work off of a single monitor or a cramped laptop display at home. If you have the budget and space to add a second or third monitor, you then have the choice between buying the ubiquitous 1080p resolution (1920×1080 pixels), or 4K (3840×2160 pixels), the higher resolution that’s already common on TVs and some high-end laptops.

PCWorld’s editors have been through exactly the same debate with our own home offices. The strategy we’ve landed on is this: Buy a 1080p monitor (or two!) now, to create your own dual-monitor or insane multi-monitor setup. Then save your pennies and upgrade to a far more expensive 4K display later. Because everyone’s situation is different, we’ll help you decide your best path forward.

The biggest reason to buy 1080p first is bang for your buck. Because 1080p displays are a lot cheaper than 4K displays, you can get more monitors for your money; and more monitors are better than more resolution.

Windows 10’s Snap feature and its spiritual successor, FancyZones, can help, as they both allow you to organize windows to various corners and zones on your monitor or monitors. But Snap limits you to four windows on a screen at one time, for reasons that should be obvious: The windows eventually become too small to use. Adding display space allows you to see more apps and windows at once, so you can juggle multiple tasks or add focal points to your workspace.

Right now, even a pair of 1080p displays are vastly cheaper than a single 4K monitor. A decent 1080p display like this Acer KA220HQ 22-inch display is priced at $100, while the cheapest standalone 4K display we could find was the LG 24UD58-B, a 24-inch display priced at $297. If you’re interested in a multi-monitor setup, you’re simply getting more for your money with 1080p.

We haven’t reviewed these 1080p displays ourselves, but here are some suggestions:

Sceptre E225W-19203RRemove non-product link: This frameless 22-inch display costs less than $100, operates at an eye-pleasing 75Hz, and includes an HDMI cable. Speakers, too.

Acer HA270Remove non-product link: I prefer a larger 27-inch panel like this one (which takes up 24 inches of horizontal desk space). This IPS panel runs at 75Hz, and offers AMD FreeSync technology for gaming. At just $140 or so, it’s a good deal.

What if I don’t have room for two monitors?

Some of you may be saying, the reason I wanted to buy a 4K display is that I don’t actually have space for an extra monitor. Think again! Start thinking like a city planner. Think up.

If you have a tight desk space, consider buying a monitor that swivels into portrait mode, like a skyscraper. A 1080p monitor on my desk measures 22 inches along the horizontal, and I’ve reduced its footprint to just 13 inches by rotating it vertically. You might want your primary display positioned in landscape for video playback, but portrait mode lends itself well to websites, Word documents, and even email.

(Here’s a buying tip: if you’re searching a shopping site, use either “pivot” or “portrait” as a search term to search for displays that can be aligned vertically.)

Another option is a VESA mount, which essentially replaces the monitor’s display stand with a custom mount that you can buy. A VESA mount like this $35 optionRemove non-product link can elevate a display above your desk, either suspending it from a wall, or—much easier and cheaper—mounting it on your desk using a C-clamp or grommet.

Here are some suggestions:

HP VH240aRemove non-product link: At press time, this 23.8-inch 1080p pivoting monitor was just $110 on Amazon, which seems like a solid deal. While there don’t appear to be that many bells and whistles, portrait mode and a VESA mount make this a good choice.

Philips 226E9QDSBRemove non-product link: The Philips 226E9QDSB does not rotate into portrait mode on its own stand, though it does have a VESA mount that you can use to orient it as you wish. While it’s small at 22 inches, it’s priced comfortably under $100 and offers 75Hz frame rates to boot.

Should I get a widescreen display?

Taking the 1,920 horizontal pixels of a 1080p display and doubling them to create a 3,840-pixel-wide display might sound like a terrific way of buying more screen space for your money. After all, you’re effectively stretching two 1080p panels across a single display, with just a single monitor stand on your desk.

Unfortunately, the market doesn’t agree. Amazon doesn’t offer many, and Newegg’s cheapest option was a refurbished $659 3840×1080 Samsung C49HG90DMNRemove non-product link.  A 2560×1080 display is another option, which adds 33 percent more pixels to the display, and might be wide enough to provide larger, more easily visible windows. Still, a display like this 29-inch LG 29UB67-BRemove non-product link is $307. Ultrawide displays typically can’t rotate into portrait mode, either.

Instead, consider “frameless monitors,” whose nearly nonexistent bezels may make good candidates for placing them directly next to one another. We have a guide for setting up a dual-display configuration.

With that price, however, our base argument still holds: A 1080p display, even a more expensive model, simply makes more financial sense. There are reasons to consider 1440p, especially if you’re thinking about gaming at higher resolutions. In general, though, stick to a 1080p display if additional space is the priority.

Who should buy a 4K display? When you’re ready to move up from 1080p

Six months ago, I shelled out close to $400 for the LG 27UK650-WRemove non-product link, a fantastic 4K 27-inch IPS display with HDR capabilities. I bought the display for two reasons: as a replacement for an existing 1080p display; and as a 60Hz gaming display for an Xbox One X and some PC gaming. I also retained an existing 1080p monitor that I intended to continue using.

It’s at this point that 1440p or even a 4K display makes more sense, especially if you’re trying to fit more information on your screen or use the displays for watching video and want your favorite shows or streams in a higher-resolution format. Of course, you can also simply choose a larger monitor in the same resolution, or choose among HDR or higher-refresh-rate options for more visual improvements.

My advice, though, is to start basic and work your way up. You’ll enjoy all the benefits of more screen real estate without breaking the bank.