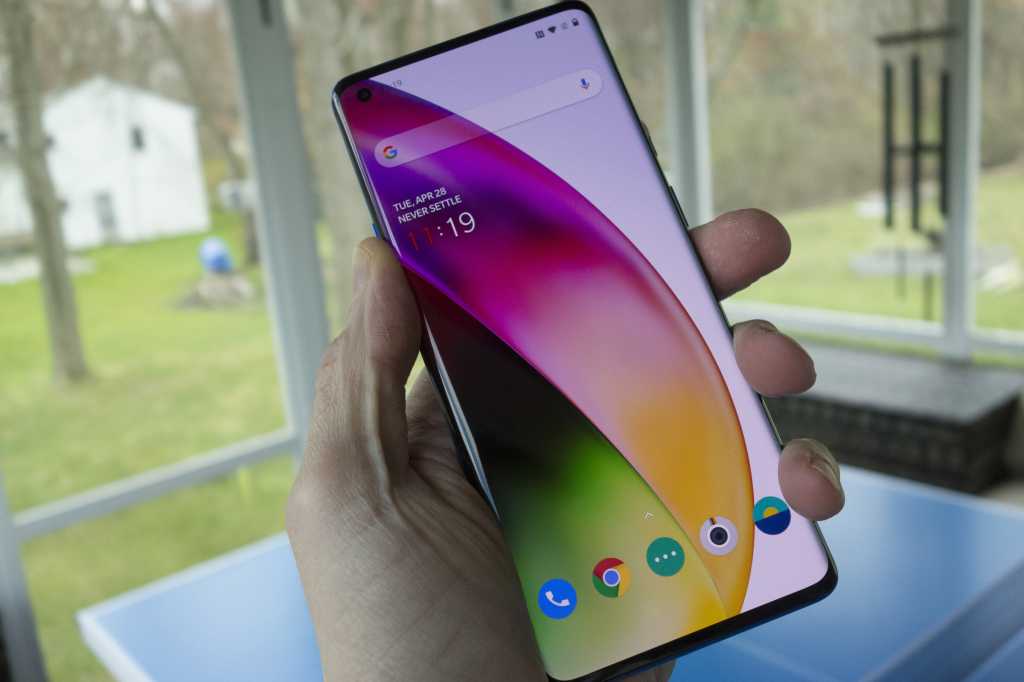 The OnePlus 8 pro isn’t just another OnePlus phone with high specs and a low price—it’s a bona fide premium Android handset, with a price to match.

It’s also the first OnePlus handset to top a thousand bucks (with tax), more than three times the cost of the original OnePlus One. To be fair, things have changed quite a bit since 2014, when Samsung’s flagship Galaxy S5 cost just $650 off-contract. But even though OnePlus can claim the 8 Pro costs $300 less than the closest apples-to-apples comparison Galaxy phone, a four-figure sticker price is still much more shocking on a OnePlus phone than a Samsung one.

While the 8 Pro is a fantastic phone that continues to shine a light on just how expensive premium Android phones have become, the light is less illuminative this time around. By throwing out its own playbook to give diehard fans everything they wanted, the OnePlus 8 Pro has joined the ranks of the phones it was supposed to undercut.

The design of the OnePlus 8 Pro doesn’t deviate much from that of its predecessor, the OnePlus 7 Pro. Its dimensions are a touch bigger, and it’s a bit lighter (199 grams vs 210 grams) and thinner (8.5mm vs 8.8mm). There’s one noticeable deviation: The curved display now has a hole in the upper left corner for the selfie cam, rather than the delightful pop-up cam introduced on the 7 Pro.

It’s probably for the best that OnePlus removed the moving and inherently breakable parts, but I’d be lying if I didn’t say I missed it. The pop-up selfie cam might have been a little gimmicky, but it gave the 7 Pro a unique feature that set it apart from other premium Android phones. The hole-punch camera gives it a sameness that makes it feel less special, amplified by the fact that the bezels haven’t really shrunk much either.

But while the overall look may be a little on the safe side, the OnePlus 8 Pro is still a very nice phone. My chief complaint is the rather bulbous camera bump, which is once again centered and vertical but noticeably thicker, making the OnePlus 8 Pro all but impossible to use on a flat surface. It’s better with one of OnePlus’s bumper cases, but with such a beautiful, fingerprint-repelling frosted glass finish in Ultramarine Blue or Glacial Green, you won’t want to cover it with a slab of silicone.

While there are plenty of “pro” components inside the OnePlus 8 Pro, none of them matter more than the display. OnePlus isn’t often at the forefront of screen tech—its first OLED screen didn’t arrive until late 2015, in fact—but the Fluid Display on the 8 Pro is on the absolute cutting edge of smartphone screen tech, belying the seemingly minor spec-sheet improvements over the 7 Pro:

We’re talking about a tenth of an inch more screen, a slightly taller aspect ratio, 30 more hertz of refresh, and 3 fewer pixels per inch. Taken together, though, all those small changes make a huge difference. The faster refresh rate is the most noticeable, with simply effortless scrolling and super-smooth transitions. But even when you’re not touching the screen, the brightness, refined motion interpolation algorithms and HDR Boost are noticeable. My only complaint is with edge rejection, which is a constant nuisance on a phone this size.

The brightness of the display helps the optical fingerprint scanner. On the whole, it’s speedier and more reliable than the S20’s ultrasonic sensor, but despite conscious effort from OnePlus to improve the experience, it’s still very hit-or-miss. All things being equal, I’d much rather have 3D facial recognition like the Google Pixel 4’s Face Unlock, even if that meant a return to a notch.

Biometrics aside, the OnePlus 8 Pro isn’t just the best screen OnePlus has made—it’s the first I’ve used that rivals the latest from Apple and Samsung. The brightness, color gamut, and color accuracy truly raise the bar. But I’m not sure anyone who would consider a OnePlus phone necessarily needs a screen this good. It’s not that OnePlus customers aren’t discerning, but when faced with a $1,000 price tag, I wonder how many would-be buyers would just pick up a Galaxy or an iPhone instead. Besides, the display on the $499 OnePlus 7T is very good too.

With the Snapdragon 865 processor and next-gen Wi-Fi onboard, the OnePlus 8 Pro is every bit the screamer you’d think it is. I regularly topped 10,000 in PCMark Work 2.0 benchmarks, and my gigabit home internet with an Orbi WiFi 6 System delivered consistently fast speeds better than 600Mbps (versus 450Mbps on the OnePlus 7T). The S20 Ultra benchmarked a little better overall, but the 8 Pro is insanely fast.

I didn’t get a chance to test the 5G modem because I’m a Verizon customer (Verizon is supporting 5G only on an exclusive OnePlus 8), but my experiences with T-Mobile’s 5G network on the S20 left much to be desired. T-Mobile might be able to boast that it has America’s first nationwide network, but for the most part, it’s not all that much faster than LTE. We’re still years away from super-fast 5G being anywhere near as ubiquitous as 4G, so the extra expense for the 5G modem in the OnePlus 8 Pro won’t pay off for a while.

What’s more impressive about the 8 Pro is the 4,500mAh battery. It’s a good size, but it performs like it’s much bigger. Even with the 120Hz screen turned on, I was able to make it through a full day of heavy use with juice to spare, rivaling the performance of the 5,000mAh battery in the S20 Ultra. Benchmarks bore this out, topping 10 hours in PCMark’s tests, an impressive feat for a battery under 5,000mAh in an Android phone.

The OnePlus 8 also introduces wireless charging for the first time. It’s a welcome addition, even though third-party charges are only supplying slow 5W charging. You’ll need to buy a separate Warp Charge 30 Wireless Charger for $70 to get the full 30 watts of power that the OnePlus 8 pro is capable of, but most people should probably skip it. Not only is it pricey, but the built-in fan is so loud that OnePlus built a configurable bedtime mode that limits the charger to 10 watts, so it won’t disturb your sleep.

Helping the speed and power management is OnePlus’s delightfully minimal Oxygen OS. The new parts are relatively slight—most notably dark mode has been enhanced a bit, and Live Caption makes a welcome appearance—but as usual, OnePlus’ skin is less about features than functionality. For example, the system can detect when you’re less likely to use the screen—when you’re playing a movie, for instance—and effectively lower the refresh rate to 60Hz to preserve battery. Conversely, the touch sampling rate is bumped to 240Hz when you are using the screen, so tapping and scrolling feel even faster than they look.

However, OnePlus is still only promising bi-monthly Android updates with the 8 Series, a schedule that’s not going to cut it for a thousand-dollar phone. To be fair, updates could arrive sooner than that, as OnePlus has a robust beta program to make sure the final release is free of bugs. But when Samsung and Google are pushing out system updates near the beginning of every month, OnePlus’ update schedule seems stuck in the past.

With such a high price tag, the expectations for the OnePlus 8 Pro are high as well, and no other component will be more scrutinized than the camera. On paper, the OnePlus 8 Pro’s camera is top-notch, sporting four lenses including a novel color filter camera and a new Sony IMX689 image sensor with a 1/1.43-inch sensor.

In a general sense, the OnePlus 8 Pro takes great pictures, and anyone who uses one to snap a landscape or a portrait in good-enough lighting will be happy with the results. However, it still feels like a generation or two behind the smartphone leaders. Just like last year’s 7T Pro was bested by the iPhone 11 Pro and Galaxy Note 10+, the 8 Pro isn’t quite at the level of its newest peers when it comes to processing, particularly with night mode and action shots.

With solid hardware, the 8 Pro’s camera abilities could change with updates—and as such, a mid-review update did improve the speed of autofocus and quality of low-light shots—but it’s unlikely that the 8 Pro will see a significant leap. You can argue that the issues I’ve outlined below are nitpicky, but at $1,000, the OnePlus 8’s camera should stand up to those in other like-priced handsets.

Take night mode. While OnePlus has done a fine job with improving its phones’ low-light abilities over the years, the OnePlus 8 Pro still doesn’t quite measure up to Google’s stellar output. In the image above, both phones are able to pull out an impressive amount of detail from pitch blackness. The Pixel 4 handled the color properly, however, and captured far greater detail than either OnePlus phone. That advantage served the Pixel 4 in typical low-light conditions as well: Google’s processing engine did a better job with sussing details and preserving the integrity of the scene.

OnePlus’s inferior processing is evident with action shots as well. While OIS and Super Steady mode do well to keep videos stable, the photo engine struggles to capture clean motion even in brilliant sunshine. In the photos below, the 8 Pro (left) was able to lock in on my son’s face, but his feet and hands are blurry, and the badminton birdie and racket are barely recognizable. The Pixel 4, on the other hand, snapped the whole scene as if everything were perfectly still.

OnePlus’ most unique camera feature is its fourth lens, which introduces a color filter lens for snapping Instagram-worthy shots at the source. In a world where filters are a dime a dozen, it’s a little gimmicky, especially considering there are only four options to choose from, and the 5MP image quality is quite low compared to that of the main lens.

Granted, these are smallish problems, but for the price, good enough isn’t good enough anymore. If OnePlus is going to compete in this space, it’s going to need a camera that challenges the Pixel and iPhone in the areas where they excel. The OnePlus 8 Pro just isn’t on their photography level yet.

Should you buy a OnePlus 8 Pro?

There’s no denying that the OnePlus 8 Pro is a great phone. It can hold its own against any other Android flagship when it comes to performance, and in an apples-to-apples comparison, you won’t find a better price for a phone with these specs.

OnePlus had an opportunity to expose how excessively expensive high-end Android phones have gotten. All it has proved with the 8 Pro is that building a cutting-edge 5G phone in 2020 is expensive.