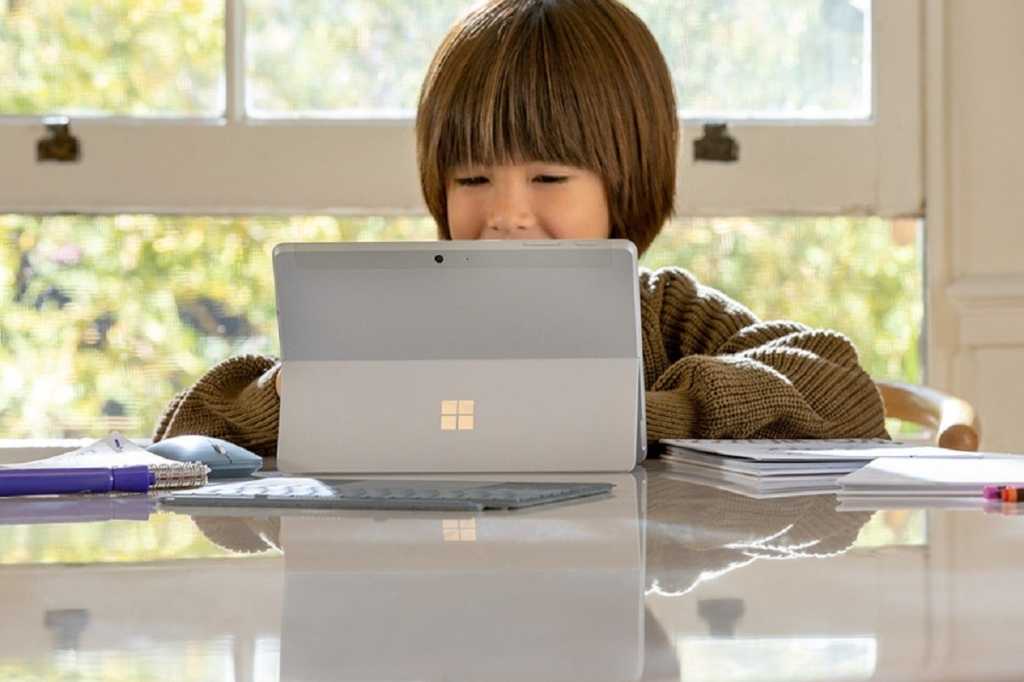 Microsoft’s Surface Go 2, announced Wednesday, offers an updated take on Microsoft’s ultralight, ultraportable Surface tablet, together with an updated processor, better display, and LTE options right out of the box.

Microsoft said that Surface Go 2 pricing will begin at $399, the same as the current Surface Go, and will ship on May 12. The Surface Signature Type Cover and Surface Pen will still be sold separately.

Since the coronavirus pandemic turned the Surface Go 2’s launch into a remote affair, we haven’t had a chance to go hands-on with it. But we have the full specifications below, plus our thoughts based upon our time with the original Surface Go.

Like many of its other Surface tablets, Microsoft will sell the Surface Go 2 in both a consumer and a commercial edition. Consumers should be aware that the consumer version ships with Windows 10 Home in S Mode (Windows 10 S ), though you should be able to switch to Windows 10 Home or Pro easily.

Not everything about Microsoft’s Surface Go 2 is known at this point, though we have most of the details. Weirdly, we don’t know what the exact “8th-gen Core m3” chip is. See below for a list of the various Surface Go 2 models and their prices, including the LTE-specific models. (It costs $100 more to add LTE to the Surface Go 2, it appears.) Note that we’ve added the $99.99 price of the Black Surface Go 2 Signature Type Cover to the spec list above, as well as the $129.99 price for the other colors.

Physically, the Surface Go 2 appears to be largely the same device as the original Surface Go: a tablet whose magnesium body is supported by a kickstand which smoothly reclines down to 165 degrees, providing a range of angles for tapping, inking, and typing. An unexpected bonus may in fact be the 5MP front-facing camera, as Zoom, Skype, Teams, and WebEx become the preferred ways of communicating with the world.

A year ago, the relative size of the Surface Go 2 would be a key selling point. We’ve all tried to peck at a clamshell PC or tablet while wedged into an airline seat or train car. The original Surface Go fit within the tight confines of an Amtrak train seatback tray table, allowing me to work while on the go. (Its larger cousin, the Surface Pro 7, measuring 11.5 x 7.9 x 0.33 inches, really can’t squeeze in.) We now live in a world where distance isn’t just a perk, but an essential requirement, making an ultraportable tablet less in demand.

The Surface Go 2 appears to be roughly half an inch longer, and, at 1.22 pounds, just slightly heavier than the original’s 1.14 pounds. We can safely assume that Microsoft shrunk the display bezels somewhat as well, packing 1920×1280 pixels (220 ppi) vs the original 1800×1200 (217 ppi) PixelSense display. The Surface’s traditional 3:2 display ratio, however, has been maintained. Remember that the Surface Go was Microsoft’s first to adopt USB-C as well as the traditional Surface Connector; we’ll have to see if Microsoft uses them for peripheral expansion or something more.

One weak point that we hope Microsoft addresses: the Surface Go 2 typing experience. Microsoft’s first Surface Go was accompanied by smaller Type Cover that wasn’t all that pleasant to use.

Performance will make or break the Surface Go 2

The key to the Surface Go, however, has always been the processor. Refer to original Surface Go testing if you’d like; the first Go was competent, but simply for Office work and web browsing. The new Surface Go 2 offers up to 64 percent better performance than its predecessor. Potential buyers should clearly be eyeing the more expensive Core m option, rather than the slower Pentium Gold-powered devices. Whether the Surface Go 2 qualifies as a must-buy device will really depend on how well it performs the basic business tasks that on-the-go workers make part of their daily routine.

Qualcomm should be watching closely. Microsoft did not go with the recent Qualcomm Snapdragon 8cx to power the Surface Go 2, though the tablet uses a Qualcomm modem. Samsung’s Galaxy Book S should demolish the Surface Go 2 in terms of battery life, but this performance chart should sum up the Go 2’s chances:

Here, the Surface Go finishes well down the list of benchmarks, with its anemic Pentium processor inside it. But though the Galaxy S is a traditional clamshell, it’s thin and light at 2.18 pounds—not too much more than the 1.7 pounds or so of the Surface Go 2 and a Type Cover. Being able to squeeze onto a tray table is important, but so is performance and all-day battery life. Can we assume that Microsoft chose Intel over Qualcomm for reasons of performance?

Possibly. Connectivity, however, will continue to play a role. We don’t know whether the Surface Go 2 will include a SIM slot, an eSIM, or some integrated SIM that can be turned on via a partnership with one of the major carriers. Ten hours using either Wi-Fi or LTE offers a lot of wiggle room in terms of real-world longevity, but it appears that users will receive more run time than the roughly 6.5 hours of the original Surface Go.

Processor, battery and form factor will likely dominate the conversation, but potential buyers shouldn’t ignore some of the less obvious features, either. Microsoft’s making a big push to sell its user-facing cameras, as users have quickly learned that webcams are now our window to the world. Neither the 5MP user-facing camera nor the 8MP rear camera have apparently changed from the prior generation. But more competitors use a 1MP user-facing camera, which simply can’t capture the amount of information that the Surface Go 2’s camera can.

Microsoft also said that it has developed a “new” Camera app for its rear-facing camera, with hooks into the Whiteboard app. We’ve seen this previously in the Surface Pro X, with dedicated Whiteboard controls, like this:

It’s not clear whether Microsoft has come up with something new or is simply highlighting its existing work. I suspect this feature will be underutilized, but it’s worth noting. Likewise, the Surface Go and Surface Go 2 reclined to encourage inking with the Surface Pen, including taking inked shapes and transforming them into polished shapes.

The complement to the Surface Go 2’s camera is its audio capabilities, which include a pair of enhanced dual far-field mics. Microsoft executives have told PCWorld that there are in fact multiple audio pipelines, both for speaking to Cortana as well as to other, remote coworkers. AI processing helps filter out fan and typing noise, too. The original Surface Go was noteworthy for just how loud its speakers were, too. We’ve seen recent laptops like the Lenovo ThinkPad X1 Carbon (7th Gen) attempt to blow users away via loud, rich audio. With Dolby Audio powering the Surface Go 2, we’ll have to see if Microsoft’s tablet follows suit.

As an ultramobile tablet in what is (for right now) a fairly static world, Microsoft’s Surface Go 2 does face some challenges. But with improved performance and a competitive price, the Surface Go 2 may be an interesting addition to Microsoft’s stable.

Updated at 11:10 AM with the exact listing of the 8th-gen Core processor, and at 1:14 PM to clarify the Windows 10 in S Mode upgrade options.