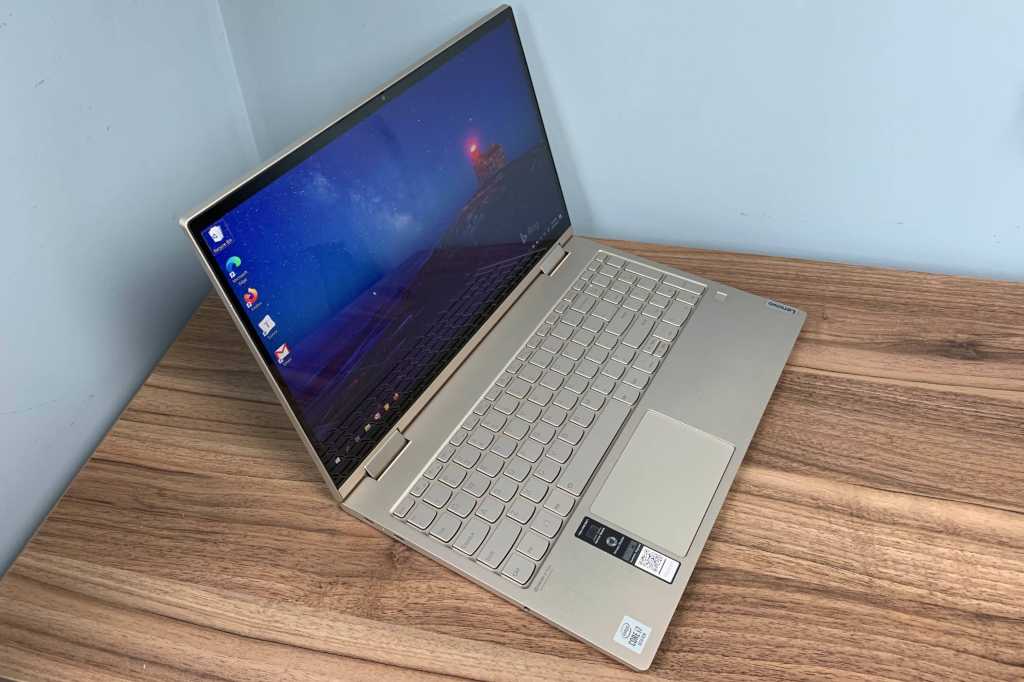 The Lenovo Yoga C740 15 has a great display and excellent battery life, but it makes some big sacrifices in pursuit of a lower price.

The Yoga C740 15 is the kind of laptop Lenovo should have knocked out of the park. Its higher-end cousin, the Yoga C940 15, already stands out as a fine MacBook Pro alternative, so the C740 15 could have been a step-down variant. Lenovo did just that with its 14-inch Yoga C740 14, the cheaper counterpart to the C940 14 convertible. (Both of those laptops are excellent.)

Sadly, the Lenovo Yoga C740 15 missteps. It has no discrete graphics card like the C940 15, and it uses a much weaker processor, yet it’s not much lighter (0.22 pounds). Its body also seems flimsier, which detracts from the typing experience, and it lacks some of the clever design flourishes from Lenovo’s fanciest convertibles, such as a built-in stylus.

The Yoga C740 15 does have a few saving graces: Its battery life and screen brightness are excellent for a 15-inch laptop, and it’s less expensive than a lot of similar rivals. But for a laptop that still costs over a grand, the Yoga C740 15’s trade-offs detract from its appeal.

This Yoga C740 is better 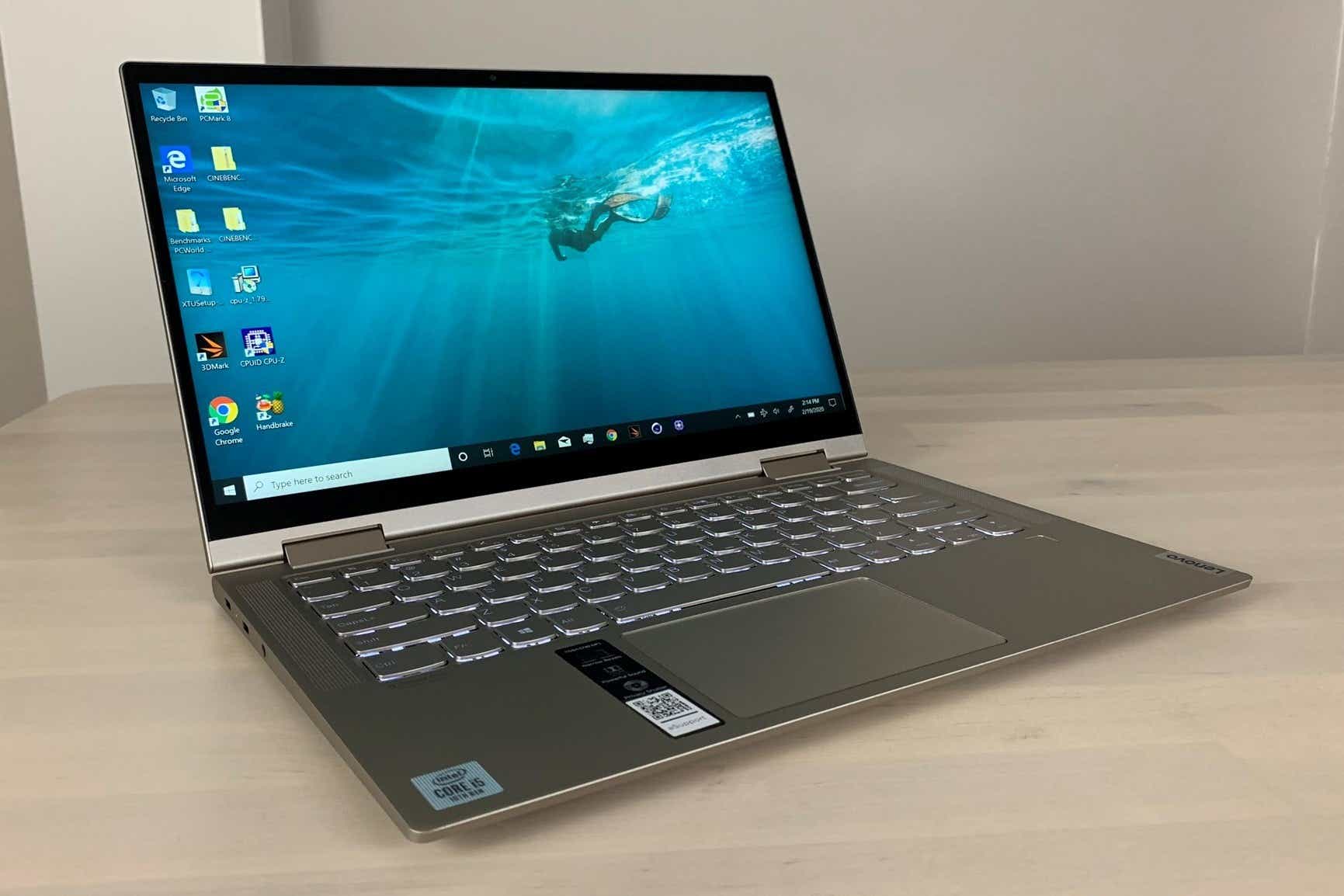 Best Buy and Lenovo’s website both offer other configurations, including one with a much dimmer 250-nit display, Intel Core i5-10210U processor, 256GB of storage, and 8GB of RAM for $860. A fully decked-out laptop with a 1TB hard drive and 16GB of RAM carries a list price of $1,185.

Unlike the Yoga C940 15, which comes standard with an Nvidia GeForce GTX 1650 Max-Q graphics card, the Yoga C740 doesn’t offer discrete graphics even as an option, and its U-series Intel processor is a big step down for multi-threaded and graphics-intensive workloads. (More on that later.) The C740 15 is also missing Wi-Fi 6 and Thunderbolt 3 support, and it doesn’t have a stylus built in.

On the upside, the weaker CPU allows the C740 to use a USB-C charger, rather than the proprietary cable Lenovo uses in more powerful laptops.

At 4.19 pounds, the Lenovo Yoga C740 15 falls within the expected weight range for a 15-inch convertible laptop, especially when you consider the hefty 60Wh battery and the aluminum chassis (in lighter-gray “Mica” or darker “Iron Gray”).

Still, it’s worth stepping back to consider how appropriate the 2-in-1 approach is for a laptop of this size. This isn’t something you can comfortably cradle on the couch. Even if you can look past the bulk, a 15-inch screen is just unwieldy for reading or playing touchscreen games. Other high-end 15-inch clamshell laptops that use integrated graphics and don’t transform into tablets are typically much lighter.

This might explain why we don’t see a lot of laptops like this in the first place. While one could level the same criticisms at Lenovo’s C940 15, we expect that laptop to be heavy because of its workhorse tech specs, plus it includes a stylus for drawing in apps like Photoshop. The C740 15’s bulk feels harder to justify.

Display quality is a highlight. The Yoga C740 15 has the same narrow bezels as its pricier counterpart, and it has an advertised peak brightness of 500 nits. We actually measured a higher brightness of 546 nits at the center of the screen, which is downright impressive for any laptop. That capability becomes especially helpful outdoors or against a window, as it can overcome the reflectiveness of the laptop’s display. The screen also supports Dolby Vision HDR in certain streaming apps, including Netflix, iTunes, and Amazon Prime Video.

The only nitpick here is that the display’s colors seemed pretty washed-out by default. Reducing the brightness level in Intel’s Graphics Control Panel made the display feel less harsh, while allowing colors to pop more.

Despite the liberal use of aluminum, the Lenovo Yoga C740 15 has some flex around the center of the keyboard, which means the keys squish down a little against the base of the laptop. The keys themselves do have a satisfying amount of travel and give off a hearty pop when you press on them, but the typing experience doesn’t feel as solid as that of the C940 15, which doesn’t have any flimsiness issues.

The keyboard layout is identical, though, with a number pad and media keys on the right side. Lenovo shaves down its backspace and modifier keys to make room for the number pad, but the layout of the letter and number keys is still spacious.

The trackpad also feels the same as what Lenovo uses across its higher-end Yoga range. That means you’ll get a perfectly smooth tracking surface—albeit one that feels like it ought to be bigger—and a click mechanism that, as with most other Windows laptops, starts feeling too stiff about halfway up the trackpad. So it goes.

For laptop speakers, the Lenovo Yoga C740 15’s audio quality is surprisingly clear and well-balanced, thanks in large part to Dolby’s Atmos-branded software optimizations. While these aren’t the loudest speakers you’ll find on a laptop—again, the C940 series does better on that score, with speakers cleverly built into the laptop hinge—Dolby quite obviously boosts the volume of spoken audio when you’re listening to someone talk on YouTube. Music doesn’t come off as overly harsh either, even at maximum volumes.

The webcam is a more typical 720p shooter. That’s good enough for well-lit rooms, but it gets grainy in any kind of low-light scenario. The good news is that Lenovo managed to sneak in the same type of privacy shutter it includes on its fancier Yogas, so you can cover up the camera by flicking a little switch above it. While the camera doesn’t support Windows Hello face recognition, the laptop’s fingerprint reader works quickly and accurately.

Here we get to the heart of the Lenovo Yoga C740 15’s triumphs and tribulations. Once a laptop pushes into the four-pound range, you should start expecting some performance payoffs for gaming or content creation. Unfortunately, the C740 15’s Intel Core i7-10510U and integrated UHD 620 graphics aren’t a great combo for either.

Intel’s U-series chips do just fine with single-threaded performance, which is what you’ll need for productivity tasks such as document editing and web browsing. PCMark 8’s Work benchmark simulates those very tasks, and the Lenovo Yoga C740 15 predictably holds up well. It even beats several laptops with G-series CPUs and isn’t far behind the Yoga C940 15’s workhorse Core i7-9750H CPU.

Cinebench is where the C740 starts to slip a little. This is a short test that renders a three-dimensional scene using the laptop’s CPU. Once again, the Yoga C740 15 tops a lot of other laptops with similar specs. But when you bring in a real workhorse processor like the Intel Core i7-9750H, there’s no contest in multi-threaded performance.

For a better real-world example of what this means, take a look at our HandBrake benchmark. In this test, we encode a 30GB .MKV video file into a 1.4GB .MP4 file, which is a great way to gauge multi-threaded performance over an extended period of time. The Lenovo Yoga C740 15 gets it done in 57 minutes and 17 seconds, which is admirable for its class of CPU. We’d suspect that the 15-inch form factor gives the Yoga more breathing room to avoid throttling down the CPU during heavy workloads. But again, when you bring in the Yoga C940 15 and its H-Series processor, it does the same job in nearly half the time.

Gaming performance is an unsurprising weak point, thanks to the UHD 620 graphics built into Intel’s U-Series CPUs. Obviously the Yoga C740 15 will be eating the dust of any laptop with a discrete GPU, but even Intel’s G-Series CPUs offer far superior gaming performance through their integrated Iris Plus graphics. Lenovo’s own Yoga C940 14 is a great example, coming out way ahead in 3DMark’s Sky Diver graphics test.

The clear redeeming factor here is battery life. Our test involves looping a video file with the laptop set to airplane mode and its display set at approximately 255 nits’ brightness. We also attach earbuds at medium volume. The Lenovo Yoga C740 15 lasted for 11 hours and 5 minutes, which is frankly great for a 15-inch laptop, though it’s worth noting that HP’s Spectre x360 15t does better even with discrete graphics. (Also: The HP model tested here has since been updated to an MX250 GPU and 10th-generation Intel CPU, which would presumably fare better in our other benchmarks.)

Is battery life enough to save the Lenovo Yoga C740 15? Maybe for a specific type of user, one who doesn’t need robust performance for gaming or content creation, but insists on a 15-inch touchscreen that converts into a tablet and is at the upper bound of their budget at $1,100.

Outside of that tiny box, though, there’s a strong case to consider alternatives. Lenovo’s 14-inch Yoga C940 14 has a smaller screen, and the list price is $200 higher, but it weighs only 3 pounds and has longer battery life, far superior graphics performance, better audio quality, a more satisfying keyboard, and a built-in stylus.

Meanwhile, if you can let go of your tablet ambitions, Microsoft’s Surface Laptop 3 and the LG Gram 15 are much lighter while still offering 15-inch displays. And if you’re willing to get spendy, Lenovo’s Yoga C940 15 and HP’s Spectre x360 15t—both convertible laptops—are more compelling as workhorses.

Presumably Lenovo’s Yoga C740 series is meant to reach a broader audience by offering lower prices than the flagship Yoga C940 range. But in this case, Lenovo cut away much of what makes big, bulky laptops worth buying. The result is a notebook whose appeal is too narrow.