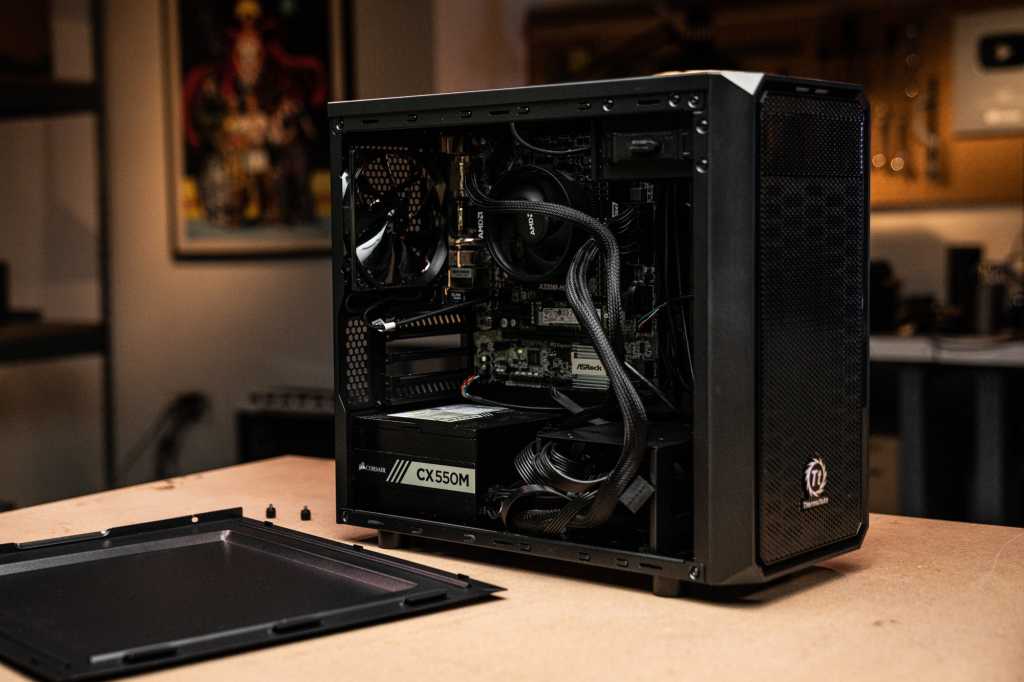 We like cheap builds. We like parts that offer great value. So when AMD released its Athlon 3000G last November, we immediately wanted to get our hands on the $50 processor.

At launch, the 3000G undercut Intel’s cheapest Pentium by $15—a notable savings in this ultra-budget space. This 2-core, 4-thread part also comes unlocked, meaning you can overclock it for a little extra performance. And if that weren’t enough, you can play games with just this chip, thanks to its dedicated Vega 3 graphics cores.

Overall, you can put together a modest but reliable machine for just over $300, with no need to scour for used parts. We actually built this PC for our YouTube channel: You can watch the videos of our experience in the embeds below.

For how to build your own 3000G system—plus real-world data on how it’ll perform—keep reading.

Current street prices listed in parenthesis. Scroll to the table below for links to the specific parts we suggest.

When we last challenged ourselves to build a $300 PC, we focused purely on the ability to complete everyday tasks, like browsing the internet or preparing simple documents for work and school.

What a difference three-and-a-half years make. Even though the 3000G is based on older Zen architecture—despite the numbering scheme of its name, this chip does not share the tech found in AMD’s latest 3rd-generation Ryzen processors like the 3600 and 3700X—its overclockability and its dedicated graphics cores give it an edge over its main competition in this price range, the Intel Pentium G5400. Being able to work and game on a single chip while paying less outweighs the G5400’s slight advantage in CPU-based tasks. In other words, its all-rounder status makes your money go much further.

True, its predecessor, the Athlon 200GE, largely paved the way already. The 3000G is but an update to the 200GE, and sports only a modest bump in performance. Still, in addition to the small clock-speed boost, the 3000G has a cheaper list price ($50 vs. $55) and supports overclocking.

Outside of sale periods, the cheapest motherboard you can get is one with an A320 chipset, the most stripped-down of all the chipsets. This will save you the most money, but be aware that taking this route negates one of the 3000G’s key features—support for overclocking.

In order to squeeze out that extra bit of performance, both your chip and your motherboard have to support CPU overclocking, and A320 mobos don’t. (They do, however, support overclocked RAM, so you can go beyond the 3000G’s stock support for 2667MHz speed RAM.)

Most A320 motherboards also have just two slots for memory (RAM). That means if you plan to later increase the amount of RAM you have, you must make one of two less-than-optimal choices: You buy a set of two DIMMs now to get the best performance and replace both in the future with a higher-capacity set. Or you go with the same capacity in only one DIMM and nerf your system.

We instead recommend waiting for a sale to bring down a B450 board into the $60 range, as these boards will support CPU overclocking and usually have four DIMM slots for RAM.

For memory, we’re making two important choices to aid your 3000G’s performance: First, opting for a dual-channel configuration by purchasing two 4GB DIMM sticks instead of a single 8GB DIMM. Dual-channel allows more data to pass between the RAM and the memory controller at the same time, boosting system performance.

Second, we’re going with 3000MHz speed RAM. You could shave off a few dollars by going with slower RAM, but it’s not worth it. The longer you plan to use this machine, the better off you are with faster RAM, as Ryzen processors respond well to faster RAM. (So if you see a deal on DDR4-3200 or higher for a similar price to 3000MHz, snatch that up fast!) Equally important: Since integrated graphics must rely on system memory for loading game assets, its performance is affected by the speed of the RAM you choose.

In short, faster is better, and 3000MHz is a good, affordable baseline for a machine like this.

Given the affordability of solid-state drives these days, we think a 512GB SATA SSD is a solid compromise between a large amount of storage space and faster read/write times. Sure, hard-disk drives offer more room for the same price, but they drag in speed. SSDs make systems with modest hardware feel blazing fast.

But what about games with huge installs? Well…the ones that are 50GB+ tend to be the most punishing, graphically intense—not the type you’ll be playing on this system directly, if at all. For titles like Metro Exodus and Assassin’s Creed Odyssey, you have to punt those over to a game-streaming service like Nvidia’s GeForce Now in order to play them.

A power supply of this wattage is more than what’s needed—but we’re recommending one between 450W and 500W so that your system has room to grow down the road. If you later want to pick up a dedicated graphics card (or get gifted one by a generous friend), you can install it without having to buy a whole new power supply to accommodate the upgrade.

Also be sure to get a power supply from one of the major vendors (EVGA, Seasonic, Cooler Master, Corsair, etc) with an 80+ efficiency rating at minimum—better is 80+ Bronze. Don’t skimp on your power supply, as using a quality PSU saves you from headaches and the need to replace fried parts.

Simple, basic, and easy to build in—we’ve chosen to spend a little bit more for a reliable case from a known (and well-liked) brand.

You could go a little cheaper, but the layouts aren’t always ideal. We’re erring on the side of a build that won’t frustrate you to tears (especially if it’s your very first time). There’s room for expansion, too.

This case was cheaper at the start of the year, but component prices have risen given current global supply chain issues. But even at a $40 street price, you’re getting a decent budget case.

Linux works great as a basic operating system—and you can’t beat its price tag. The caveat, of course, is that this option only works for people who can get by without specific Windows-only products (i.e., free alternatives like OpenOffice or even Google Docs and Google Sheets are sufficient for your needs).

For help in deciding which flavor of Linux to install, check out our guides on best distros for beginners and getting started with Linux. After you’re up and running, check our list of the best free, open-source software and best Linux games to fill out your system.

If you can’t give up Windows just yet (Linux support in software and games is more limited), you’ll want to look into obtaining a Windows license for cheap.

We are going ultra-basic here, but if the name of the game is frugality, this duo gets the job done. Later on, you can upgrade to something more comfortable (like a keyboard with mechanical switches or ergonomic gear). For now, these transmit human input, and that’s good enough.

You could spring for a cheap 1080p monitor ($90 most times year round, and lower during Black Friday), but why do that when people upgrade to more badass panels and give away perfectly good older 1080p monitors for free? (It’s easier than dealing with electronics recycling.) Check Freecycle, local swap sites, and Craigslist to see what’s out there.

TIP: When you’re out grabbing free monitors, get two—one 1080p for normal work and browsing, and one 720p (if possible) for gaming. Games will look crisper on a screen that matches the resolution you’re playing at. Plus, having two monitors is great for productivity in general.

Throwing in a dedicated graphics card definitely shoots this PC past the $300 mark, but for a total of about $440 (or a bit less if you catch the RX 570 4GB on sale) for your whole system, you can play games at 1080p on Medium to High settings.

That’s quite a boost to such a little machine, as the Vega 3 graphics in the 3000G hit 720p Medium at very best. You’ll be on par with current-generation consoles for about the same price as those machines’ MSRP, but with far more versatility (and often cheaper games, if you’re looking to fill out your backlog of older titles).

Prices fluctuate daily depending on sales, so you might be able to get this closer to a flat $300 by timing your purchases well. (We suggest signing up for Newegg’s daily deals newsletter, or monitoring Reddit’s buildapcsales subreddit to find bargains.) On the whole, street prices have been steadily ticking up, likely due to the effect of the pandemic—our original build for YouTube actually cost less than $300 at the time.

Once you have the parts in hand, all that’s left is to build the machine. If you need help putting it together, take a look at PCWorld’s extensive PC building tutorial, as well as our tips on common PC building mistakes and 7 things we learned once we built our first PC. All that info will keep the process smooth sailing.

AKA: But can it run Crysis?

After we built our own $300 Athlon 3000G system, the number-one question we got was, “But can it run Crysis?” (The long-standing, perennial meme among PC gamers.) So we tested it.

The answer is yes.

You have to buy the version from GOG (and not Steam) to avoid 32-bit vs. 64-bit OS nonsense and jump straight into the game, but our $300 PC handles it beautifully. (As you might expect, given that the game is almost 13 years old.)

I also fired up a handful of other games to see what else our newest gaming PC could run, ranging from 2014’s Middle-earth: Shadow of Mordor to this year’s Ori and the Will of the Wisps.

As expected, this machine pushes to 720p and no further—and often things must be dialed down to their lowest graphical settings. It hit a wall on AAA games going back about four years (Rise of the Tomb Raider), and even struggled some with new indie-ish titles (Ori and the Will of the Wisps). I hadn’t anticipated the graphics choking on Ori, especially in the more graphically demanding areas of the map. (The frame rates dip even lower, into the 25fps range, when I visited the Luma Pools.) However, Ori does not allow you to adjust graphical presets, only the resolution.

For a $300 PC, though, these results are pretty dang good. Will you put up numbers close to those of friends who spent $1,200 on their PCs? No, of course not. But if you get grief from other people for having a system like this, ignore them. You get to play games.

Should you be surrounded by jerks who won’t let up on your choice in PC components, tell them to hush up or put up the cash for a solid discrete GPU, like a 4GB RX 570. For that extra $120, your system will make a huge leap to 1080p on High to Ultra settings.

While pairing this graphics card with such a modest CPU does constrain its performance, you still get plenty of oomph from the RX 570 in this build. Despite the GPU’s older technology (Polaris architecture launched in 2016), it handily takes on modern AAA titles.

If a discrete graphics card isn’t an option, check if GeForce Now supports the newer AAA games you want to play. The game-streaming service offers an alternative way to run those resource-intensive titles, and it even has a free tier. (You just get booted after an hour of playtime, with the ability to immediately queue up again for another session.) We found the experience totally acceptable for single-player campaigns, even in shooters.

Overall, we came away from this build impressed by its gaming performance. Don’t let anyone deride its modest hardware and call it a potato—it’s got plenty of life. Especially if you’re clever about how to put it to work.