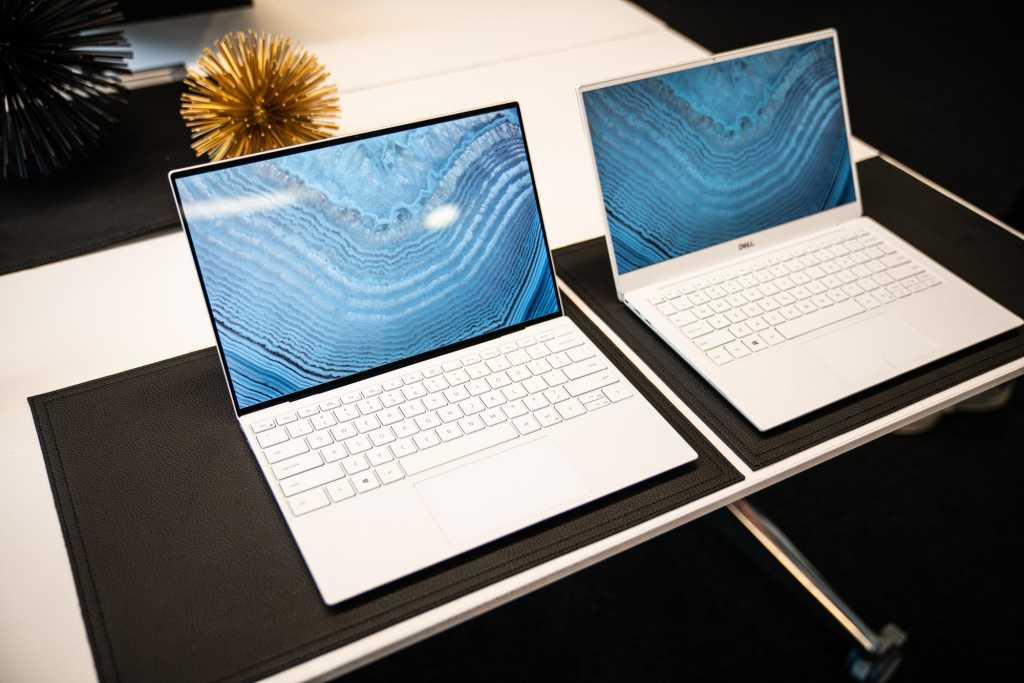 You’ve set your sights on a Dell XPS 13. The only problem: Which one do you buy? The XPS 13 7390 clamshell or its 2-in-1 version, or the “new” XPS 13 9300? All three are great laptops—ignore the model numbers, which are confusingly non-sequential—but there are key differences.

We’ll walk you through the models and weight their strengths and weaknesses. What’s your priority? Versatility? Performance? Connectivity? Overall value? We’ll call a winner for each, and you can skip to the section that interests you most by clicking a link on the left.

Note that this story is based primarily on the high-end XPS 13 models Dell sent us to test. We do have some advice for those looking at lower-cost XPS 13 versions—check out the “best value” section below.

All the Dell XPS models explained

There are three Dell XPS 13 models to choose from at the moment:

The Dell XPS 13 2-in-1 7390 was a complete redesign. As a convertible, it can function as a laptop as well as a tablet, or in A-frame “tent” mode for presentations.

When the XPS 13 2-in-1 7390 debuted in the fall of 2019, it was the first laptop based on Intel’s most advanced 10th-gen, 10nm Ice Lake CPUs, and it was the poster child for the Intel’s lofty Project Athena aspirations too.

Besides the 360-degree design, it has pen support, a 16:10 aspect ratio screen, advanced copper vapor chamber cooling, and a new MagLev 2 keyboard. It also made a few hard choices to achieve its thin profile, such as soldered-in permanent SSD. The laptop has been one of the fastest Ice Lake laptops. Read our full XPS 13 7390 2-in-1 review.

Because these models are closely related, there are some criteria you don’t need to worry about much, because they’re basically the same.

When it comes to connectivity, the XPS 13 models focus on the future. The XPS 13 7390 gives you the most, with its two Thunderbolt 3 ports, a USB-C port, and a microSD port. The other XPS 13 laptops simply lack the USB-C port. Obviously, we all wish there were an old fashioned square USB-A port, but none of them have that. All three laptops use Intel Wi-Fi 6 hardware, also known as 802.11ax.

Which XPS 13 is the most versatile

For most people, a traditional clamshell laptop does 90 percent of what they want, and all three of these laptops can do the job. Not everyone will like the XPS 13 2-in-1 7390 because of its MagLev 2 keyboard, with its thin, low-travel design.

Still, that XPS 13 2-in-1 is the only one of the three that offers a tablet mode with pen support (though it doesn’t include the pen). Its touch display means you don’t have to get to the trackpad or keyboard either. All three XPS 13’s are excellent laptops, but the XPS 13 2-in-1 7390 is the most versatile of the three.

Which XPS 13 has the best screen

Dell takes advantage of that aspect ratio and nearly eliminates the bezel on both the 16:10 laptops. The result is a stunning look and more usable space. We prefer the taller aspect ratio, as it gives us a little more space for our work. Both the XPS 13 2-in-1 7390 and XPS 13 9300 also feature Sharp IPS panels that can hit a very bright 500 nits, and EyeSafe technology, which reduces blue light emissions without that horrible brown tint look other panels offer.

Which XPS 13 wins on performance

Before we get too far down the rabbit hole of laptop performance, you need to ask yourself what you’re doing. If you are mostly running Microsoft Office, Google Chrome or Zoom, the differences between the three laptops here are mostly meaningless. All three exceed your needs, and you can honestly skip the rest of this section.

Unless you know you need a six-core CPU for intensive workloads (and don’t mind the weaker graphics), the 10th-gen Core i7-1065G7 offers the best balance.

Which XPS 13 is best for battery life

Our battery life test loops a 4K video file in airplane mode, with earbuds attached and the brightness set to 250 to 260 nits. With modern CPUs, that’s pretty much cruise control, as the CPU idles down while the integrated graphics does most of the work. The 12 hours or so of battery life is actually realistic doing that.

Your mileage will greatly vary based on what you do. If you switched to doing Microsoft Office work for the entire time, we’d probably slice off two to three hours from that projection. Browsing might slice off three to four hours, depending on the websites and how strong the Wi-Fi signal is. If you run a GPU- or CPU-intensive chore, expect maybe two hours of battery life at most.

What will have more of an impact on overall battery life than the CPU or laptop you pick is the resolution of the screen. Most of the laptops in the 12-hour range have standard-resolution screens such as 1080p. Higher-resolution 4K and 4K+ screens have about four times the pixels, creating more work for the laptop’s backlighting—at the expense of battery life.

If you look at our chart below, it’s no surprise: Laptops with the 4K panels get significantly less run time. Take the Dell XPS 13 7380, for example, and go with an FHD screen, and we’re certain battery life will jump up to the 12-hour range.

Winner: Any XPS 13 with a standard-resolution screen

Which XPS 13 is the best value

We looked at Dell.com and configured all three laptops for what we think are very decent specs: top-end Core i7 chips, 16GB of RAM, 512GB SSD, and standard-resolution screens without touch.

Which budget XPS 13 is the best

While most of our performance analysis looks at the higher-end configurations, we do have advice for those shopping on a budget. We compared the three cheapest configurations of the XPS 13 and found the best deal to be the XPS 13 7390. For $900 on Dell.comRemove non-product link, you get a quad-core Core i5-10210U, 8GB of RAM, and 256GB SSD.

The runner-up in budget configuration is the XPS 13 2-in-1 7390 for $1,000 on Dell.comRemove non-product link. Just understand the compromises, starting with a step back in performance to a dual-core Core i3-1005G1 and anemic G1 graphics. The 4GB of RAM is tight today, too.

The most expensive “budget” model is the XPS 13 9300. For $1,200 on Dell.comRemove non-product link you get a quad-core Core i5-1035G1 with 8GB of RAM and a 256GB SSD. The G1 graphics is nothing special, but if all you’re doing is browsing the web, using Microsoft Office and using Zoom video, most of these will work just fine. Note that Zoom video conferencing requires a quad-core CPU with Hyper-Threading to do its nifty virtual background trick.

Which XPS 13 should you buy?

A laptop is a very individual purchase, which means we can only go so far in declaring a “best” XPS 13. After going through all the major criteria, however, we can see certain trends that can help steer your decision.

The Dell XPS 13 7390 offers the best overall value, perhaps obviously given that it’s a slightly older model. You’re not giving up much except in performance and screen quality.

The Dell XPS 13 2-in-1 7390 comes out strong in multiple categories. It’s the most versatile because it’s convertible, and it also has a gorgeous display and solid performance.

The Dell XPS 13 9300, the latest model, is the most expensive. However it also offers a spectacular display and strong performance.

In all cases, we would suggest you think carefully before choosing the 4K display option. The extra pixels will tax your performance and battery life heavily. If you actually travel with this laptop, sticking with the 1080p display will save you much angst.