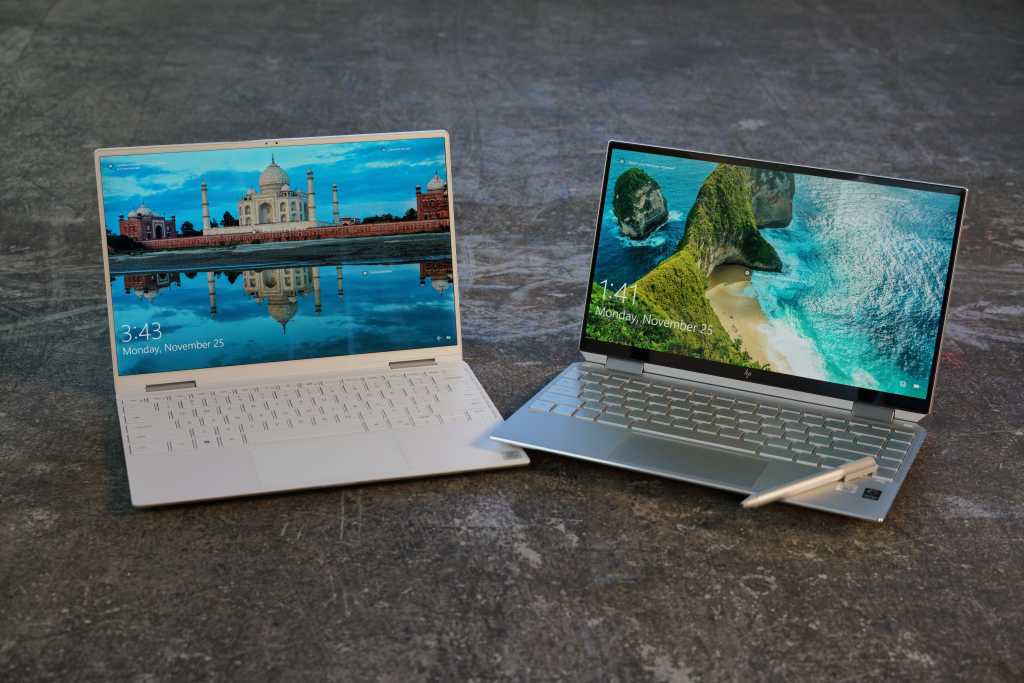 If AMD’s new mobile Ryzen 4000 CPUs are on your radar, you’re probably facing a laptop buying decision you haven’t considered in a long time (if ever): AMD or Intel?

The bigger question some are asking is this: “Should I even buy an Intel-based laptop anymore?” Ryzen 4000’s mobile performance has been so impressive, we can understand why people are pondering something formerly unthinkable.

The answer isn’t cut and dry. Unlike a desktop, where you can pick and choose your parts, laptops are total packages. As compelling as Ryzen 4000 mobile is, it doesn’t matter if the rest of the laptop isn’t up to snuff. So before you buy, we’ll run you through the reasons why an Intel-based laptop may still be justified.

You want a premium feature

From GeForce RTX 2080 GPUs to 4K OLED panels, and exotic wood palm rests to detachable screens, Intel’s dominance shows in the shiny parade of premium laptops that use it, and the selection of premium features that still can’t be found on AMD-based laptops. Yes, AMD scored big with its Microsoft Surface 3 Laptop with Ryzen, but it’s still more common to budget builds. While the CPU is important, an OLED, miniLED, 4K  display or high-end GPU is equally important to some.

Intel’s Thunderbolt vision was always to create “one cable to rule them all.” Viewed from 2020 Intel has achieved that goal with the ability to support USB-C, DisplayPort, HDMI, high-wattage charging, and external graphics using PCIe.

That last nifty trick is the most compelling. If, for example, you decided you wanted to add real graphics horsepower to a 2.5-pound thin-and-light laptop, or your old gaming laptop’s GPU were over the hill, an external graphics card in a Thunderbolt 3 eGPU cabinet would do the trick.

That is, unless you want an AMD-based laptop. The reasons are numerous and complicated, but the hard fact is that we have yet to see a single AMD-based laptop with Thunderbolt 3 support. Vendors have told us the feature could show up later this year. Unless you’re willing to wait and hope, your current choices are all Intel—dozens and dozens of laptops with Thunderbolt 3 ports.

No one ever got fired for buying Intel

There used to be a saying for corporate buyers that “no one ever got fired for choosing IBM.” The phrase basically acknowledged IBM’s once-dominant place in technology, where risk-averse corporate buyers would never accept anything else.

IBM is no longer that force in IT, but Intel is. Intel dominates corporate laptops even more than consumer laptops, due to the conservative nature of IT shops—especially large IT shops—around the globe. AMD will need to fight for a foothold before anything changes. If you’re buying to be compliant with your company’s needs or you’re issued a work laptop, the odds are it will have Intel inside.

You want a MacBook

As PC people, we can think of lots of reasons not to buy a MacBook, from the PC’s lead in innovation to the superiority of Windows 10.

That said, if you won’t give up your MacBook until we pry it from your Butterfly-keyboard-wracked fingertips, you have no choice. From MacBook Air to MacBook Pro, the only option is Intel in Mac laptops..

Those rumors that Apple may be toying with AMD CPUs may be true. But the company is just as likely to bust out an Apple ARM-based A-series as it is a sweet Ryzen 9 4900HS MacBook Pro 17. Don’t get your hopes up yet.

You use software that favors Intel

All that doesn’t matter if you use software that is highly tuned for Intel’s CPUs. Occasionally we’ve seen problems with software looking for a feature Intel has but AMD doesn’t, such as DL Boost or QuickSync.

So yes, before you drop a wad on a laptop, poke around and see if the particular application you use favors a certain CPU design.

You don’t care about performance that much

While PC enthusiasts can never have too much performance, the reality is most people don’t need much horsepower—not for using Microsoft Office, Google Chrome, and Zoom. In fact, for a lot of people a Core i5 or Ryzen 5 is more than enough CPU. It’s probably equally important to consider weight, size, keyboard, trackpad, screen, ports and price than to obsess over the CPU choice.

You really care about battery life

We’re feeling pretty bullish on AMD battery life after seeing Asus ROG Zephyrus G14’s battery performance. That said, we have yet to see definitive proof that laptops based on AMD’s U-series can achieve the stupendous battery life we’re already seeing from some Intel-based (and Qualcomm-based) thin-and-light laptops.

A laptop’s battery life isn’t solely the responsibility of the CPU. The power consumption by the screen, the audio subsystem, the size of the battery, and many other parts in a laptop also play a role. If you care a lot about battery life in a laptop, Intel-based laptop designs have proven themselves many times. The jury is still out on AMD in an ultraportable.