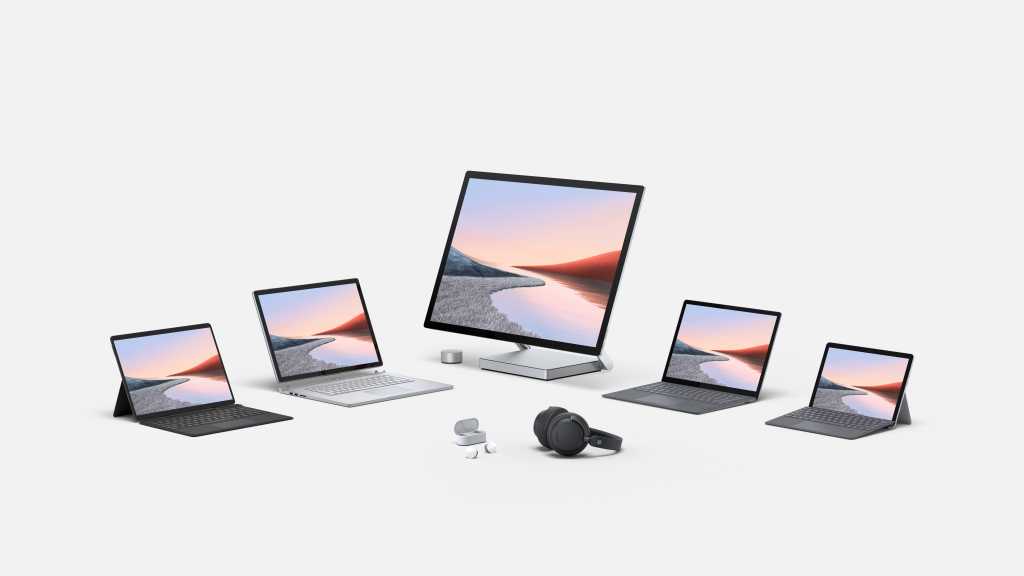 Microsoft is launching a new generation of Surface devices that aims to offer something for everyone. Announced Wednesday, the devices include the new Surface Book 3, Surface Go 2, and Surface Dock 2. To help you stay focused, Microsoft will soon ship the Surface Earbuds, and—surprise!—the Surface Headphones 2.

While the Surface Book 3, Surface Go 2 and Surface Dock 2 were not unexpected, the breadth of Microsoft’s Surface-related hardware comes as a bit of a shock. Virtually all of the new Surfaces can be classified as refreshes. The Surface Book 3 adds new 10th-gen Ice Lake Core processors, as well as Nvidia GTX and Quadro RTX ray-tracing GPU options. The Surface Go 2, meanwhile, boasts 8th-gen Intel Core m chips.

Tying them to displays and other peripherals will be the Surface Dock 3 and the Microsoft USB-C Travel Hub. The real surprise is the Surface Headphones 2, now with a black option, a rotating earcup, and improved battery life. There’s more, too: Last year’s Surface Earbuds, plus a pair of new keyboards.

“As we continue to expand our Surface family of devices, our goal is to design a Surface for every person, every work style and every location, scaling from the most portable to the most performant,” Panos Panay, chief product officer of Windows + Devices, and Robin Seiler, corporate vice president of devices for Microsoft, said in a statement. The two said their goal was “to give you devices that can switch context as quickly as you do to take you from work to play to everything in between.”

For that price, Microsoft’s offering a premium, but not too premium, experience. Both the 13.5-inch and 15-inch Surface Book 3s are based on Intel’s recent “Ice Lake” 10th-gen chips, both well-regarded mobile processors with integrated graphics (though AMD’s Ryzen Mobile 4000 chips look even better). Because the cheapest Core i5 Surface Book 3 doesn’t use a dedicated GPU, it relies on Ice Lake’s graphics—meaning that Microsoft’s couldn’t go with the faster, CPU-only Comet Lake alternative.

Otherwise, the Core i5-1035G7 and Core i7-1065G7 options will be married to either an Nvidia GTX 1650 (Max-Q) or GTX 1660 Ti (Max-Q). At the high end, there will also be Nvidia Quadro RTX GPU options, too, for those seeking more traditional workstation-like performance. So yes, there will be support for ray tracing—even it the GPU is designed for creation, not gaming, and is a slower Max-Q option at that. It gets a little crazier in memory and storage: up to 32GB LPDDR4X memory, and a 2TB SSD option for United States customers.

A number of things have remained unchanged, for better or worse. Battery life should remain pleasantly massive: up to 15.5 hours for the 13.5-inch device, and up to 17.5 hours for the 15-inch device, about the same as before. Unlike the Surface Laptop 3, key travel remains at 1.55mm for the keyboard, making it one of the best in the industry. Unfortunately, though, the ports remain static, too: a pair of USB-A, one USB-C (with power delivery) and a full-size SD slot.

Microsoft’s followup to the original Surface Go squeezes a slightly larger, higher-resolution 10.5-inch screen inside the same ultralight Windows tablet hardware. The key to the upgraded Surface Go 2, though, is probably the processor: an 8th-gen Intel Core m3 chip improves the overall performance by a whopping 64 percent, according to Microsoft.

The Surface Go 2 is priced beginning at $399, and will ship May 12 in versions for consumers and for businesses. Unfortunately, consumers will be stuck with Windows 10 S, while business users receive Windows 10 Pro. The Signature Type Cover and Surface Pen will still be sold separately, though they’re often bundled together by third-party retailers.

Otherwise, this is the same compact Windows tablet that should appeal to those seeking an inexpensive Surface tablet, or to frequent-flyer businesspeople who need something that fits on a tray table. Surface Go 2’s magnesium chassis is still supported by a kickstand that reclines to about 165 degrees. Battery life is now about 10 hours, in either one of two options: WiFi-only, or a separate LTE-equipped version.

Pay attention to another Surface component that Microsoft is emphasizing: a user-facing 5MP webcam and a pair of far-field mics, both designed to make you look and sound your best while you work from home. Neither is new, and we’ve seen the rear-facing Camera app, which can “read” documents and output them to the Whiteboard app. Still, they’re features which are very of-the-moment.

We’ve published what we know of the full Surface Go 2 specs in a separate story, along with some early performance analysis.

We had an idea about what the Surface Dock 2 would offer from leaked product listings before Microsoft announced it. The leak from Dr. Windows, a German site, correctly identified that the Surface Book 3 would ship with a 125W charger, solving the Surface Book 2’s power problem. (The actual number is 127W.)

The Surface Dock 2 swaps the miniDisplayPort connections on the first Dock for USB-C ports. There are two “generic” USB-C ports by themselves, on one side of the device. On the other, Microsoft has added what it calls “video-enabled USB-C ports,” presumably designed with the DisplayPort interface in mind. There are also two USB-A 3.2 (10Gbps) ports, Gigabit ethernet, a 3.5mm jack, and a Kensington lock.

The Surface Connect cable is longer, too, at 80 cm, or just over 2.5 feet. Unfortunately, it probably means investing in USB-C-to-HDMI cables, instead of the tried-and-true miniDP-to-DisplayPort cables.

Surface Headphones 2 and the Surface Earbuds

That sounds like a solid deal, given that Microsoft appears to have left what was good about the Headphones intact—the ability to dial the ambient noise control up and down, across 13 different levels. Microsoft said it’s worked specifically on identifying human voices, and either blocking or amplifying them.

Three things are new for this generation: rated battery life that’s increased from 15 to 20 hours, an ear cup that now rotates 180 degrees for greater comfort, and a new black option to complement the classic platinum look.

Microsoft will ship its Surface Headphones 2 on May 12, the company said.

Meanwhile, Microsoft showed off the Surface Earbuds last October, which seems like a lifetime ago. Originally set to challenge Amazon’s own $130+ Echo Buds, the Surface Earbuds have now been marked down from $250 to their final selling point of $199. They, too, will ship May 12.

Microsoft originally pitched the Surface Earbuds as both a terrific way to listen to music via Spotify—with rich Omnisonic sound—as well as a transcription and even translation tool for Word, Outlook and other apps. Originally, Microsoft said the Surface Earbuds were good for 24 hours of charging via the charging case: 8 hours per charge, with two “refills” from the case. (The company now says they offer “all-day battery life” with the included wireless charging case.) If there was any knock against the Earbuds, it’s that the large, tappable control surface dominated your earlobes.

Otherwise, though, it looks like Microsoft will have its own competitor to the Google Pixel Buds, the Apple AirPods Pro, and more.

Microsoft described the Microsoft Ergonomic Desktop as one that “reduces fatigue and delivers exceptional comfort and control with a split keyboard design featuring a cushioned palm rest and an ultra-precise mouse with cushioned thumb rest.” The Microsoft Bluetooth keyboard is a “full-sized keyset” in a slim, modern design, accompanied by a “compact, stylish mouse that fits comfortably in your hand.”

It looked like Microsoft might be making its excellent Surface Precision Mouse part of this combination, but representatives say it’s actually the Microsoft Ergonomic Mouse.

While it’s disappointing that the pandemic means that we can’t see all of these devices in person, we’re hopeful that we’ll be able to review some or all of these as they roll out. Fall brought us the Surface Laptop 3, the Surface Pro X, and the Surface Pro 7. The spring hardware refresh looks to be just as meaningful.