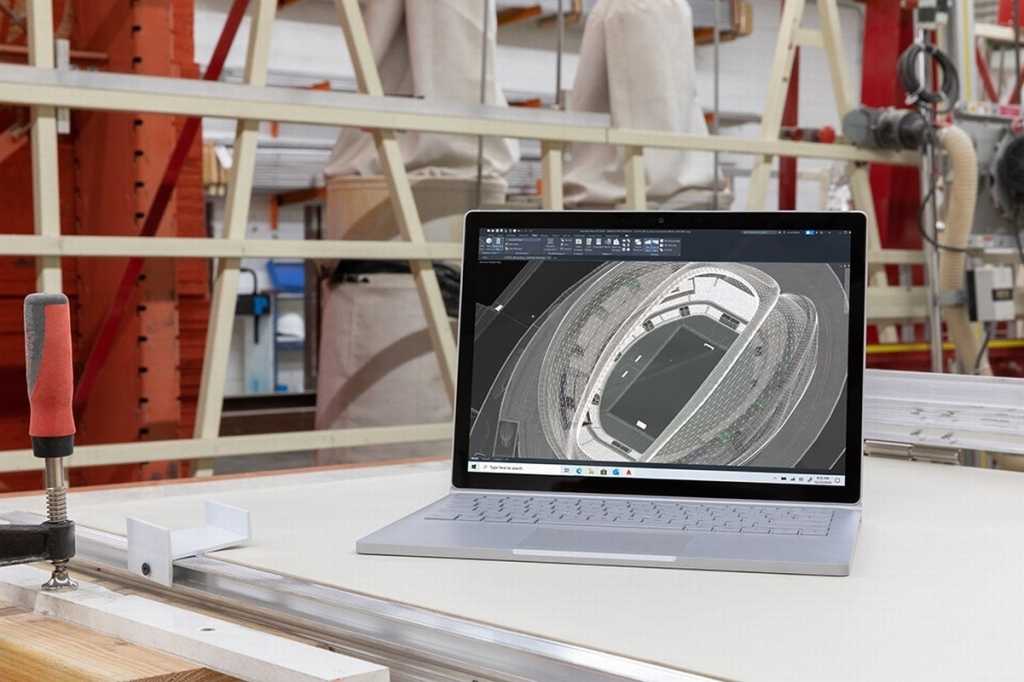 Microsoft launched the Surface Book 3 on Wednesday, refreshing the powerful detachable 2-in-1 with 10th-gen Intel Core chips and the choice of either an Nvidia GTX or Nvidia Quadro RTX GPU to enable real-time ray tracing.

With the new Surface Book 3, Microsoft employed the same basic strategy it’s pursued with other Surface devices: Maintain the overall look and feel, while improving the microprocessor and GPU. The Surface Book 3 will ship in either a 13.5-inch or 15-inch configuration beginning May 21, for $1,599 and above.

Microsoft claims the Surface Book 3 will deliver 50 percent more performance than the Surface Book 2, which offered a choice of Intel’s 7th-gen and 8th-gen processors. The Surface Book 3 offers Intel’s 10th-gen Ice Lake chips and a choice of GPUs: Nvidia’s GTX 1650 (Max-Q) and GTX 1660 Ti (Max-Q), as well as its Quadro RTX 3000 (Max-Q). Maximum memory soars to 32GB, and there’s a whopping 2TB storage option for what the company is claiming is its fastest SSD ever. Microsoft’s also claiming that the Book 3 delivers up to 17.5 hours of battery life, divided between batteries in the tablet and the base.

You don’t have to look far down Microsoft’s pricing list to be able to say with certainty: with a starting price of $1,599, the Surface Book 3 is going to be expensive. As you can see from the configuration options below, you should be able to find a version that’s a productivity powerhouse, a decent gaming machine, and/or a portable workstation.

One important fact that doesn’t show up in the Surface Book 3’s spec sheet is this: During our original Surface Book 2 review, we discovered that under peak load (including gaming), the Surface Book 2 drew too much power for the Dock to provide. In other words, the Book 2 drained the battery while plugged in. Subsequent testing confirmed other reports that the power draw exceeded that of the charger.

The company appears to be covering its bases this time. It will ship with one of three chargers: a 65W (13.5-inch, Core i5), a 102W (13.5-inch, Core i7) or a 127W (15-inch) charger. Offering the lower-power Max-Q version of Nvidia’s GPUs should help, too. The new Surface Dock 2 will supply up to 199W, Microsoft representatives say. Considering the various options, we’d anticipate that Microsoft’s engineers have solved the power issue.

Microsoft provided us with a long list of Surface Book 3 pricing options. At this point there is no “Big Kahuna,” a hypothetical 15-inch Surface Book 3 with 32GB of RAM, 2 TB of SSD storage, and the Nvidia Quadro RTX 3000.

What to expect from the Surface Book 3

The Surface Book 2 remains one of Microsoft’s iconic designs. In laptop mode, it’s a traditional clamshell, apparently still boasting its curvy accordion hinge, which keeps the Surface Book from folding completely flat. The tablet portion can be detached, serving as a massive (though kickstand-less) version of the Surface tablets. (One Surface Connect port connects the tablet and base, and is user-accessible only in tablet mode.) The display can also be removed and reversed, so that whoever you’re facing can view the screen in what Microsoft calls View Mode. All of these options remain in the Surface Book 3.

The Surface Book 3’s ports also remain the same. It appears that the Surface Book 3 will establish a dedicated display connection via the Surface Connector to the new Surface Dock 2, while the USB-A and USB-C ports will connect to external storage and other peripherals. Microsoft’s still supporting the Surface Dial, with on- and off-screen interaction. Gamers, take note: Though you can connect a wireless Xbox One controller to the Surface Book 3, this feature is only enabled on the 15-inch model.

When it comes time to connect with coworkers with Teams or Zoom, the 5MP user-facing camera produces 1080p video. Dolby Atmos-powered sound and a pair of far-field mics enhance the experience.

Microsoft claims that the Surface Book 3’s battery life is a satisfying 15.5 hours for the 13.5-inch model, and 17.5 hours for the 15-inch version. The Surface Books 1 and 2  blazed a trail ahead of many of the laptops we see today with all-day battery life, though they did so simply by offering two batteries: a 23.2 Watt-hour battery in the tablet, as well as a separate 62.2Wh battery in the base.

Microsoft’s claim that the 15-inch Surface Book 3 will deliver 50 percent more performance than the comparable Surface Book 2 is intriguing. Intel’s combination of excellent CPU performance, long battery life, and moderate GPU power should make even the lowest-end Surface Book 3 a decent, if rather extravagant, choice. You can read our review of the Core i7-based Surface Laptop 3 to see how it may compare. While AMD’s Ryzen Mobile 4000 chips suddenly look like a powerful mobile option, they are not among the CPU options on offer.

The Core i7-8650U we were given as part of our Surface Book 2 review unit generated a Cinebench R15 score of 665 across all threads. The Core i7-1065G7 is also a quad-core chip, and on paper it’s actually slower, with a slower base clock, a slower boost clock, as well as other considerations. (You can compare the two chips on Intel’s site.) In our Surface Laptop 3 tests, though, it returned a score of 751, a 13-percent boost.

Those hoping for an Nvidia RTX part for real-time ray tracing have had their prayers answered, though the Quadro chip Microsoft selected is optimized for workstations, not gaming. The Quadro RTX 3000 (Max-Q) inside the Surface Book 3 is also on the lower end of the scale.

According to TechPowerUp, the Turing chip is clocked at 600MHz, with a 1,750MHz  memory clock. It contains 2,304 CUDA cores, 36 RT cores, and 288 Tensor cores. Quadro GPUs are generally considered to offer less performance than a consumer GPU for gaming, generally due to drivers that prioritize apps like CAD rather than Call of Duty. TechPowerUp puts the Quadro RTX 3000 Max-Q somewhere between 1080p and 1440p resolutions in terms of its gaming capabilities, at “ultra” settings with frame rates hovering at 60 fps or somewhat below.

The Surface Book 3, then, crosses the threshold into “gaming PC,” but not as much as a dedicated gaming laptop. It’s a content-creation workstation and a portable tablet, too. The Surface Book 3’s soul doesn’t seem to have wandered far from Microsoft’s original vision. Soon, we’ll learn how its performance shapes up as well.