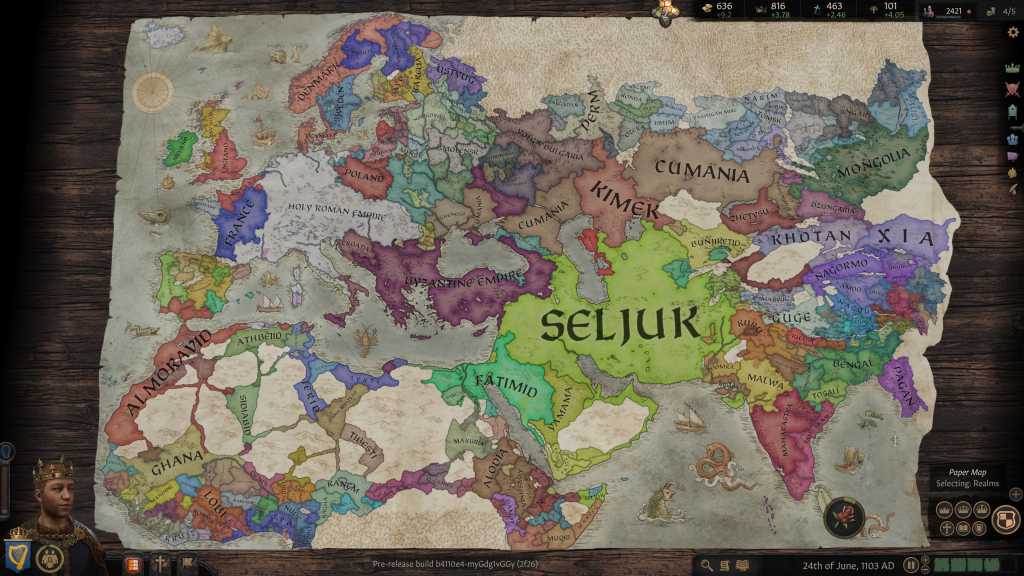 My son won’t stop dueling people. It’s Earl Muiredach who brought it to my attention, both his pride and his arm wounded. “He turned up at my doorstep and challenged me in front of everyone,” he growls. “I had no choice but to accept.”

I sit on my throne and ponder what to do with Brian, my unruly heir. Dueling my vassals simply won’t do. My grip on the Irish throne is tenuous enough as it is. Brian’s stubborn though, and ordering him to cease might not accomplish much.

There’s only one course of action, really. “Pah! Your father will show you how it’s done.” I stand and heft my sword, veteran of dozens of sieges, and I kick my son’s ass. The duels stop. My son never speaks to me again—and a few months later, he dies. Was illness the cause, as the doctors claimed? Or embarrassment?

I’m betting on the latter.

Everything is weird at the moment, and game demos are no exception. Crusader Kings III is out this fall, and typically we’d expect to get a few hours of hands-on time before release, maybe in some generic event space in San Francisco. But with that off the table, Paradox instead gave us three days to play Crusader Kings III last week.

It’s a lot of time to spend with a pre-release project, especially one with the breadth of Crusader Kings. Paradox didn’t tell us to play a specific character or country or anything. It was just “Here’s the game” and have at it.

Thus I expect there will be a lot of very interesting (and very different) coverage of Crusader Kings III out there today. People have their pet interests. Me? I typically play Crusader Kings as a near-pacifist, with no real intention of amassing an empire or scheming my way to a higher station. I’m there for the stories, the small stakes faced by backwater Dukes and Earls. Cogs in a machine.

But I’m also perpetually interested in Paradox’s tutorials. Like many, Crusader Kings II was the first grand strategy game to really hook me. And like many, I spent the first 10 to 20 hours kind of watching it run. Confused. What in the hell was a cassus belli and what was a de jure claim and how could there possibly be so many types of inheritance laws?

I was hooked in spite of that. The stories Crusader Kings II generated of friendship and betrayal, politics and marriage and murder—I’d never seen anything like it. The built-in tutorial was basically useless, but I turned to written guides and to YouTube, determined to figure out this strange sandbox.

Eight years is a long time though. Paradox has grown. It’s no longer the underdog, an upstart from Sweden with a hit on its hands. The games have gotten bigger and better looking. Stellaris just celebrated hitting three million sales this week. Grand strategy is still a niche, but it’s a much larger niche than it was in 2012, in large part because of Crusader Kings II.

There’s no getting around it, Crusader Kings III looks and plays a lot like its predecessor. Most of the time you’re simply staring at the screen, letting days and months and years blaze by and waiting for the simulation to surface noteworthy events. Your wife’s been having an affair? With your best friend and most trusted vassal? And your son and heir isn’t actually your son (and maybe not your heir for much longer)?

Changes have been made. Religion is a more robust system this time, allowing you to break away from the Catholic Church and create your own Waldensian movement, mixing and matching doctrines that suit your ruler’s disposition.

Characters in Crusader Kings III also have more depth. The new per-character skill trees are fascinating, crumbling accrued expertise to dust when rulers inevitably kick the bucket. Holding onto the throne means unlocking powerful skills, like potential vassals being more receptive to your takeover attempts. You’re robbing Peter to pay Paul though, as every year you stay on the throne means one less year for your heir to accrue those same skills during their reign, potentially dooming your lineage down the line.

I’m impressed though. Crusader Kings III is still a niche game, still a mess of menus and submenus, still replete with Medieval jargon—but it feels much friendlier than its predecessor did seven or eight years ago.

In classic Crusader Kings II fashion, the tutorial is set on Ireland where nobody really bothers you and nothing really happens. It’s a great place to learn the ropes. You’re (mostly) safe from foreign wars, and no single ruler has a real advantage. You can learn how to fabricate a claim on a neighboring earldom, how to raise your troops, how to create an alliance through marriage—all the Crusader Kings basics, but with the smallest of stakes.

Crusader Kings III takes you through all the major systems one at a time, culminating in you taking over as High King of Ireland. It’s a decent tutorial, though you’ll still be left with questions at the end I think. It doesn’t really explain how de jure hierarchies work, nor does it leave you well-prepared to leave Ireland and wage war on Scotland or England. But at least you’ll know how to raise troops, how to manage your council and sway potential rivals to your side, how to nominate an heir, and so on and so forth.

For more information, you can always dig into the extensive Tooltips system. Not the most thrilling back-of-box feature maybe, but tooltips in Crusader Kings III can be really insightful, with hyperlinks leading further and further down a terminology rabbit hole. You might pop open the tooltip for Schemes, then click on Abduction Scheme, then on Scheme Owner, then on Scheme Target, and so on and so forth, all without leaving the main game screen.

Certain actions are also more intuitive this time around. For instance, if you declare war? A big “Raise All Troops” button immediately pops up in the bottom-right. That’s a huge quality-of-life improvement, especially for newcomers. No need to raise your levies county by county.

And the “Issues” menu quickly became one of my favorite advances in Crusader Kings III. A contextual drop-down that updates whenever there’s something Crusader Kings III thinks you might be interested in pursuing, it surfaces information that would’ve been buried five or even six clicks deep in past games. That’s useful, as a returning veteran—but it’s absolutely vital for newcomers, where the interface is one of the biggest hurdles. If for instance you have a de jure claim on a neighboring county, the Issues menu tracks that claim and reminds you that you could press the claim and declare war. It’s great at generating hooks, especially when you’re feeling a bit aimless.

I still expect a cottage industry of YouTube tutorials to fill in the gaps, but you can get a lot further with Crusader Kings III on its own terms. And that’s good! Grand strategy no longer feels like a genre intended only for people who paint Warhammer miniatures and own too many board games.

It’s been about a week since we lost access to Crusader Kings III and I miss it. I find myself wanting to fire it up most days, to take control of England or France or maybe just some small holding in the Holy Roman Empire and then see what happens. Maybe the Pope will be caught in flagrante delicto. Maybe we’ll marry into royalty and suddenly become rulers of a vast empire. Maybe my son will die of embarrassment. Maybe, maybe, maybe.

In Crusader Kings you never really know, and that’s the charm of it. Forget the “strategy” aspect. It’s a story engine, and one that still—eight years after the now-free Crusader Kings II became a breakout hit—has no peer. Hopefully this time more people will get to experience what makes it so special.