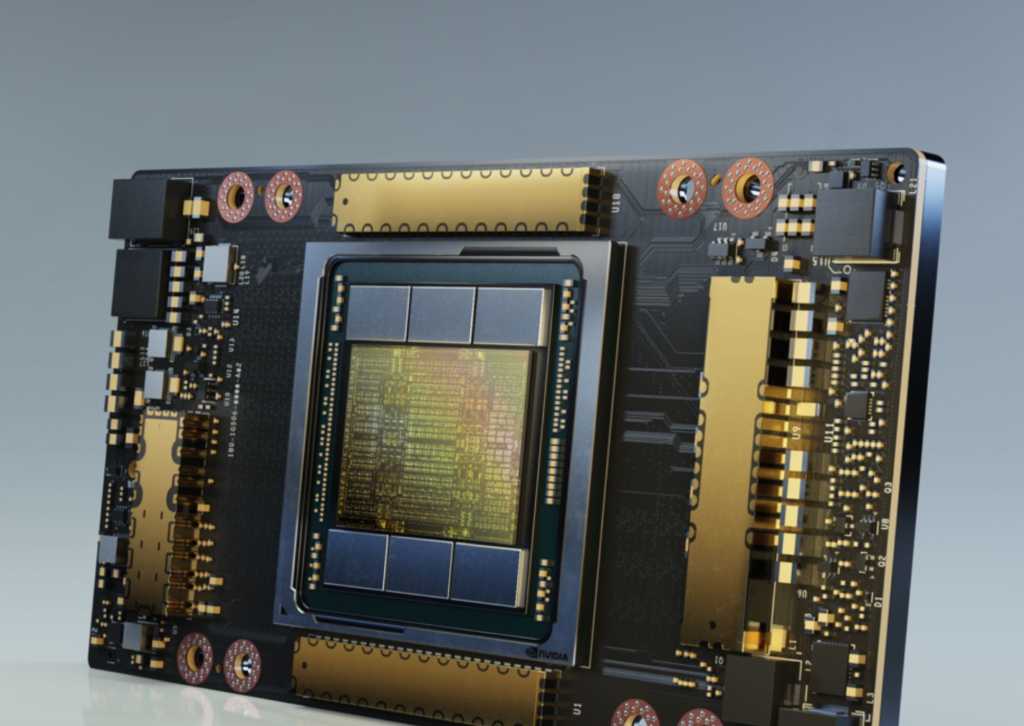 Nvidia’s next-generation GPU architecture is finally here. Nearly a year and a half after the GeForce RTX 20-series launched with Nvidia’s Turing architecture inside, and three years after the launch of the data center-focused Volta GPUs, CEO Jensen Huang unveiled graphics cards powered by the new Ampere architecture during a digital GTC 2020 keynote on Thursday morning. It looks like an absolute monster.

Ampere debuts in the form of the A100, a humongous data center GPU powering Nvidia’s new DGX-A100 systems. Make no mistake: This 6,912 CUDA core-packing beast targets data scientists, with internal hardware optimized around deep learning tasks. You won’t be using it to play Cyberpunk 2077.

If you’re looking for specific details about GeForce graphics cards, well, keep waiting. Like the Volta and Pascal GPU architectures before it, Ampere’s grand reveal took shape in the form of a mammoth GPU built to accelerate data center tasks. Unlike Volta, however, Ampere will indeed be coming to consumer graphics cards too.

In a prebriefing with business reporters, Huang said that Ampere will streamline the Nvidia GPU lineup, replacing both the data center-centric Volta GPUs as well as the Turing-based GeForce RTX 20-series. The hardware inside each specific GPU will be tailored to the market it’s targeting, though. “There’s great overlap in the architecture, but not in the configuration,” Marketwatch reports Huang as saying when asked about how the consumer and workstation GPUs will compare.

Smaller transistors mean better performance and power efficiency. The “Navi”-based Radeon RX 5000-series graphics cards beat Nvidia to 7nm, and the transition helped AMD’s offerings greatly increase their efficiency. While Radeon cards have run hot and power-hungry for years prior, the 7nm Navi cards drew even with their GeForce counterparts in both performance and efficiency—no small feat. Looking back to Team Green’s own past, Nvidia’s transition from the GeForce GTX 900-series’ 28nm process to the GTX 10-series’ 16nm process resulted in huge performance gains.

In other words, history says we should expect wonderful advancements from Ampere-based GeForce GPUs.

That’s a big leap forward, and more GPU means faster graphics cards. For reference, the GeForce RTX 2080 Ti has 4,352 CUDA cores in its 754 mm^2 die. Its successor might be downright bristling with cores.

The A100 GPU utilizes third-gen tensor cores that greatly improve performance on 16-bit “FP16” half-precision floating point tasks, add “TF32 for AI” capabilities for single-precision tasks, and now support FP64 double-precision tasks as well. It remains to be seen how (and potentially even if) the third-gen tensor cores get deployed in Ampere-based consumer GPUs, but with Nvidia pushing DLSS and machine learning so aggressively, it seems like a lock that next-gen GeForce GPUs will have leveled-up AI in some manner, especially if rumors about greatly enhanced ray-tracing performance prove true. More rays means more noise, and more noise means better denoising is required.

Nvidia didn’t announce this for its DGX-A100 system, but Supermicro also revealed new systems powered by the Ampere A100 GPU, and that announcement confirms that the next-gen hardware supports the cutting-edge PCIe 4.0 interface. AMD’s Ryzen 3000-series processors were the first to embrace the new interface, which delivers a big speed boost over the PCIe 3.0 slots found in computers for several years running.

When it comes to graphics cards, the move may seem somewhat academic. Navi-based AMD Radeon 5700 graphics cards that support PCIe 4.0 aren’t any faster than they are in PCIe 3.0 systems, as our PCIe 4.0 primer explains, and generally, most graphics cards don’t come close to saturating the PCIe 3.0 interface yet.

The best gaming CPU for most people supports PCI 4.0

That most trend matters, though. TechPowerUp’s testing shows that the fearsome $1,200 GeForce RTX 2080 Ti indeed gets a small, but measurable performance boost when running from a PCIe 3.0 x16 slot rather than a PCI 3.0 x8 slot, indicating that it’s approaching the upper boundaries of PCIe 3.0’s capabilities in multi-GPU gaming rigs. Running several GPUs in a mainstream, non-HEDT system splits one PCIe 3.0 x16 connection across the two slots.

If the Ampere-based RTX 2080 Ti successor indeed packs many more CUDA cores and a lot more graphics oomph, it could overwhelm PCIe 3.0 x8 connections. Deploying PCIe 4.0 skirts that roadbump. It also introduces a novel twist for system builders. Intel’s latest 10th-gen Core CPUs opted to remain on PCIe 3.0 rather than upgrading to PCIe 4.0. While Intel CPUs generally run slightly faster than their AMD Ryzen counterparts in games, if you plan on building a fire-breathing, no-holds-barred system with several high-end Ampere GeForce GPUs inside, opting for Ryzen and its PCIe 4.0 support could be the better move. Interesting!

What we still want to see

The GTC 2020 keynote and Nvidia’s associated documentation didn’t touch on either aspect, alas. Recent leaks and rumors suggest that GeForce Ampere GPUs will clock even higher than the speedy RTX 20-series, however, and deliver up to a 4x performance increase in ray tracing speeds. The source doesn’t have an established track record for accurate leaks, however, and you should always take rumors with a big pinch of salt. That said, all the extra space provided by the jump to 7nm gives Nvidia a lot of room to pack in more CUDA cores, more RT cores, or (hopefully) a mixture of both.

Bottom line: Nvidia’s next-gen Ampere GPU architecture is finally here, and even in data center form, there’s a lot for PC gamers to get excited about. Now the wait for Ampere-based GeForce graphics cards begins. Nvidia hasn’t uttered a peep about them, but expect to see the new hardware later this year. With “Big Navi” Radeon GPUs and impressive next-gen consoles bringing bigger performance and ray tracing to AMD hardware in the coming months, Nvidia’s sure to want to drop a hammer on its rival’s ambitions.