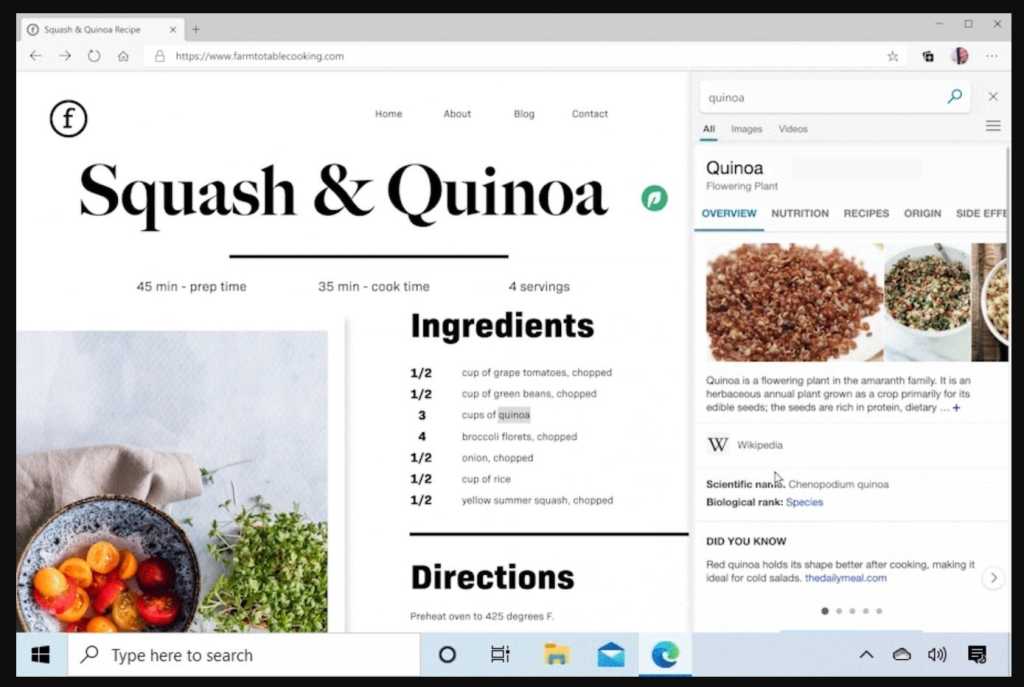 Microsoft is unrolling some new features for its new Edge browser, including a contextual flyout that opens a sidebar when performing a search, the company said Tuesday.

As Microsoft launches its Build developer conference as a 48-hour virtual event, the company is disclosing improvements to its consumer products, too. Microsoft’s new Edge (which we’ve reviewed), which the company hopes will begin replacing the “legacy” Edge across user PCs in the coming weeks, is a key area.

Other enhancements coming to Edge will include a deeper integration with work environments and a partnership with Pinterest. Most will be available soon, Microsoft said.

Today, searching for a term in Edge or any other browser usually requires opening a separate tab or window to find more information. Microsoft’s new Edge is taking a page from its online versions of Office and offering to open the search results in a sidebar instead. Note that this includes specifically highlighting a word, right-clicking, and asking Edge to search for results. The feature will roll out in Microsoft’s Edge Insider channels in the coming weeks.

It appears that the sidebar search is designed to search more for definitions and context rather than an entire separate train of thought, as the example Microsoft provided references a Wikipedia page. But Microsoft also said that people who use Edge at the office will be able to see work-specific results, too.

Work-specific results while working at home

That’s important, because Microsoft has tried to make Bing the search engine for businesses, as well as consumers. If you used Bing within your work organization, you would previously see results that could include colleagues’ names, their functions and job titles, and so on. Now, Microsoft is wrestling with providing useful results to workers who are “on the job” while at home.

One strategy Microsoft is trying is simply context-switching between your work and home accounts. Now, you’ll be able to assign a profile to a specific link, ensuring that, for example, you’ll be able to post to social media in your capacity as a private individual, rather than as an employee of your business. That still sounds like a pain to configure. So Microsoft made it simpler to go from home to work: A new feature called Automatic Profile Switching will automatically log you in using your work credentials if it detects that you’re opening a work-specific link, such as an internal HR site. Both the context-switching and Automatic Profile Switching are live now, Microsoft said.

Finally, Microsoft said that it’s adding a new “Work” tab to Bing’s search results, so if there is relevant information that your company can show you—such as your available vacation time while researching holiday destinations—it will.

When we reviewed the “new” Microsoft Edge, we noted that one of its deficiencies was its inability to sync all of its aspects between instances of the browser on multiple PCs. Edge is a surprisingly decent browser, but it still hasn’t covered those basics. It’s taken a tiny step forward on that front by rolling out extension sync support to business customers.

Consumers, though, will have to wait for extensions to sync across Edge, and it’s not clear how long that will take. However, Microsoft in June will be launching a new add-ons site “to make it more visually appealing—new categories, new search capabilities, and a new layout will get those extensions in front of customers,” Kyle Pflug, principal program manager lead for Edge, wrote in a blog post.

It’s probably fair to say that most consumers don’t even know what a Progressive Web App (PWA) is: it’s essentially a webpage that does dual duty as a Windows app. They’re more significant because of the limited developer attention the Windows Store receives, as companies and developers eye the mobile space, Apple, and other platforms. With some webpages, such as Twitter, you’re able to click a small circled ‘+’ sign in the URL bar and “install” the page as an app.

“With the most recent versions of Microsoft Edge and Windows 10, we’re making PWAs feel even more natural and familiar alongside other Windows apps,” Pflug wrote. “When PWAs are installed from Microsoft Edge on Windows 10, you’ll be able to manage them from settings, use them to share (and receive shared content), and more. They will take on a look and feel more native to the OS such as being included in the Start Menu for easier access.”

Users will have to download a Windows Insider Windows 10 build, a Microsoft Edge beta or “Canary” build, and then enable the Web Apps Identity Proxy flag within the Edge Canary build, Pflug wrote.