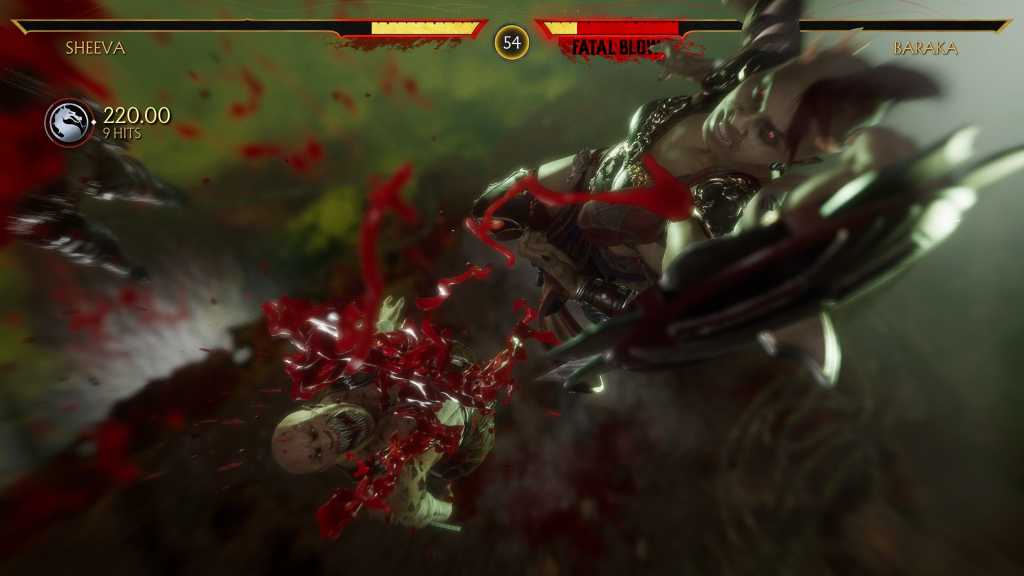 “Cease your magic, before the hourglass shatters!”

[Note: This is a review of an expansion. Expect spoilers. Like, in the very next sentence.]

When last we left Mortal Kombat 11, Liu Kang had saved the world. Having been granted the powers of a god by Raiden himself, Liu Kang defeated the time-bending deity Kronika and prevented her from remaking the Mortal Kombat universe in her own image. It would be Liu Kang who reshaped the timeline instead, ushering in a kinder and (perhaps) less kombat-filled world. Roll credits.

Or don’t. It’s in this moment, as Liu Kang prepares to reset the timeline, that a warning reverberates through Kronika’s chamber. A portal appears, and out walks Nightwolf, Fujin, and perennial Mortal Kombat antagonist Shang Tsung.

Marty, we have to go back!

There was no real need for Aftermath. Mortal Kombat 11 told a brilliant story, start to finish. Balancing the fan service of the Mortal Kombat 9 reboot with the advances from Mortal Kombat X, it made good on dozens of plot threads and characters—all while telling one of the most ambitious and entertaining stories in the series.

Hell, one of the most ambitious and entertaining stories I’ve ever seen in a fighting game. As I wrote last year in our review:

“It’s proof once again that engaging storytelling stems from characters. Mortal Kombat’s source material is surface-level dumb, absolutely. This is a series about people drafted into a mystical fight club to protect Earth from demonic invasion. It’s undeniably stupid. But NetherRealm’s spent nearly three decades—nearly a decade with this trilogy alone—building these characters and their relationships, and it pays off here.”

The original ending(s) of Mortal Kombat 11 gave NetherRealm a clean slate. Wipe the universe. Start over, or don’t. While we will undoubtedly get more Mortal Kombat in the future, the ending of Mortal Kombat 11 could’ve just as easily been an ending for the entire series. It felt clean and satisfying and tidy in a way that few games ever accomplish.

When NetherRealm announced Aftermath—well, first of all I was stunned. Nobody makes story-centric DLC for fighting games. Characters, sure. Cosmetics, absolutely. But an expansion to the campaign? Who would even buy that? And if this were most any other fighting game, the answer would be “Nobody.”

Then again, Mortal Kombat loves contrived. It loves tropes. What I love most about Mortal Kombat is it has the momentum of a dimestore thriller, a beach read full of superheroes beating the spines out of each other. If Shang Tsung wants to interrupt, let him.

And it pays off. Aftermath is short. It’s five chapters and around three hours, about half the length of Mortal Kombat 11 proper. I don’t usually spend a lot of time breaking down costs for video games, because the value proposition is different for everyone. That said, $40 for Aftermath is…a lot. Half a campaign, and three new characters—Fujin, Sheeva, and guest star RoboCop. The math doesn’t really add up, and that’s if we compare it to Mortal Kombat 11 alone, with its full-length campaign and 25 combatants. Or the fact you can get the full Mortal Kombat 11 base game plus its first run of add-on characters and Aftermath for just $60. First-year buyers are getting burned here.

If I’m disappointed at the price though, it’s only because Aftermath is such a fantastic expansion. It’s hard to justify the purchase for those who are merely interested in Mortal Kombat 11’s story, and yet it’s both one of the most entertaining campaigns I’ve played this year, and the most satisfying.

The MacGuffin this time is Kronika’s crown. When Liu Kang bested Kronika at the end of Mortal Kombat 11 he froze her in place, then roundhouse kicked her icy head off, shattering her skull into a million tiny pieces—and her crown. Unfortunately Shang Tsung appears mere seconds later and informs Liu Kang that nobody can reset the timeline safely without the crown. They’ll have to go back in time again and retrieve the crown, then defeat Kronika once more. Otherwise, it’s all for nought.

As I said last year, surface-level dumb. Aftermath is very much in the vein of its predecessor, packed with enough time travel shenanigans to make Doc Brown blush. The stakes are even higher this time though, with Shang Tsung the perfect foil for Liu Kang and Raiden. He’s betrayed them so many times before, but the enemy of my enemy and all that. If he’s offering to aid them against Kronika, can they really refuse?

Aftermath’s story manages to weave in all of the add-on characters from this past year—or the original Mortal Kombat ones, at least. No, RoboCop isn’t suddenly Mortal Kombat canon. Shang Tsung, Nightwolf, and Sindel all play a role though, as do Aftermath additions Fujin and Sheeva. Five classic characters, and with Aftermath it’s as if they were part of Mortal Kombat 11 all along. Adding them to the campaign legitimizes them, in a way.

It also allows NetherRealm to deliver a richer ending though, smoothing over a few holes in the original framework. Jax, whose arc felt a bit rushed in Mortal Kombat 11, gets a beautiful moment with Fujin in Aftermath. Scorpion and Sub-Zero also get one last scene, as does Johnny Cage. They’re not essential moments. You could stop with the original Mortal Kombat 11 and be perfectly satisfied. Aftermath merely puts a flourish on it.

And most importantly, it brings this reboot trilogy full circle. It started with Shang Tsung. It ends with Shang Tsung. The villain ever since Mortal Kombat debuted in 1992, here the player is left to wonder about Shang Tsung’s motivations. He’s helpful, but to what end? That’s for you and Raiden to find out.

Like last year I’m loathe to spoil the specifics. The twists aren’t even “twists” per se, but it’s immensely entertaining to watch Aftermath play out. NetherRealm has perfected this style, the three-hour cinematic punctuated here and there with moments where you actually play a fighting game. Aftermath is one of the best action movies I’ve watched in 2020, and a solid fighting game as well.

I haven’t talked as much about that aspect because, well, if you’re reading a review of a Mortal Kombat 11 expansion you undoubtedly know whether you’re up for that sort of fighting game. I’m enjoying Fujin though, if you’re curious. I’m also looking forward to playing more with RoboCop.

Really I’m just here to talk about Aftermath’s story though. The cost of admission is steep, but damn it, NetherRealm earned every penny in my opinion. That won’t hold true for everyone, and you’ll have to make that call yourself. $40 for three hours is a lot, especially if you have zero interest in the Towers or the Krypt or any of the other peripheral Mortal Kombat 11 modes.

There is no padding though. No spinning the tires. Maybe that’s what I like. There’s an economy of storytelling in Mortal Kombat 11: Aftermath, a sense of pacing, that you almost never get from video games because they’re too worried about taking up 100 hours of your time with busywork. Aftermath starts with the pedal to the floor and ends with the pedal through the floor. It’s one hell of a ride.