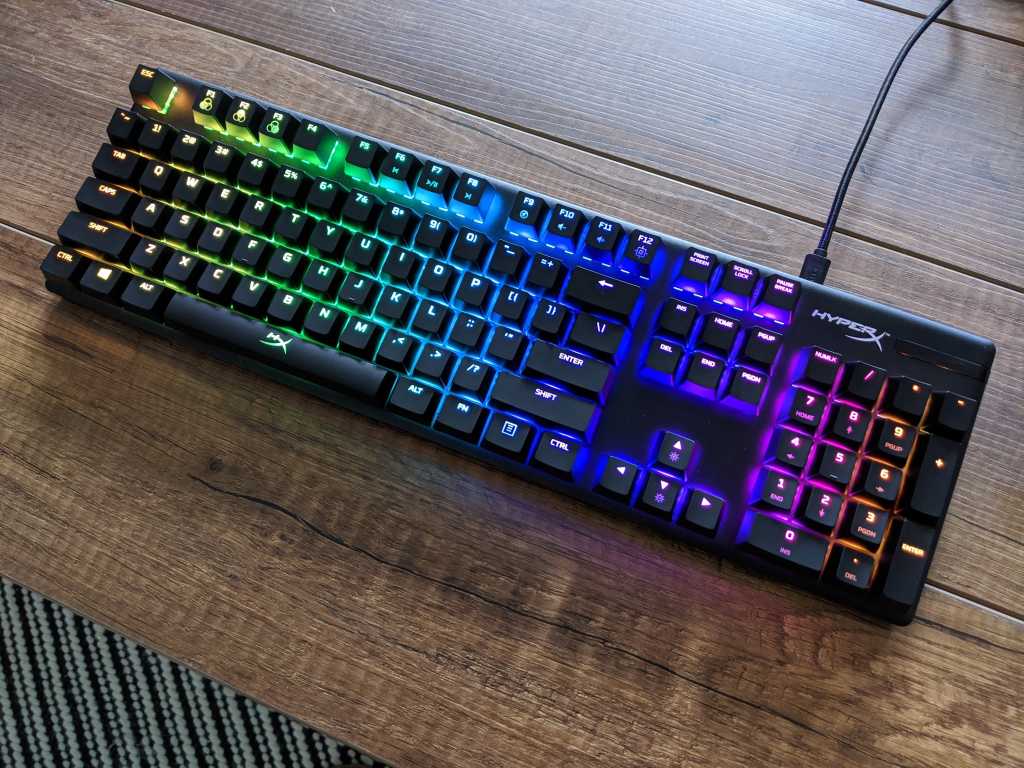 The HyperX Alloy Origins is near-identical to its Alloy FPS RGB sibling, but with HyperX’s new custom-made switches under the hood. They’re good, but maybe not worth the extra cost for a keyboard with few premium features.

By the time the great Keyboard Switch Wars are over, every company will have its own custom-built switches. That’s what happens when patents expire, I guess. The latest to join the boutique switch trend? HyperX, who used traditional Cherry MX switches through 2018, then switched to Kailh, and now has switched a second time to its own HyperX-branded line.

It’s a move so bold, HyperX created a whole new keyboard to give its switches a home. Or…well, they renamed one of their existing keyboard models, I guess. Meet the HyperX Alloy Origins, twin to the HyperX Alloy FPS—at least on the surface.

HyperX’s keyboard-naming conventions are confusing, and the Alloy Origins isn’t making it any easier. You’d think the Alloy Origins is a brand-new keyboard—and maybe it’s easier for HyperX to treat it that way. Unbox it though and you discover it’s near-identical to the existing Alloy FPS line, except it now uses USB-C instead of MicroUSB for its detachable cable.

I’m certainly not complaining. Here’s how I described the Alloy FPS RGB in my review last year: “It’s a beautiful design, elegant in its simplicity. Few keyboards, especially gaming-centric ones, are this sleek. Its gunmetal backplate and mere half-inch or so of bezel on every side make it a refreshing alternative to the oversized HyperX Alloy Elite—less feature-packed, granted, but more attractive by far.”

Those traits, both positive and negative, carry over to the new Alloy Origins. It looks good on a desk. It’s also dead simple. No pack-in wrist rest, no dedicated media keys, no fancy PBT keycaps. Not without an additional purchase, that is.

Given that the Alloy Origins lists for $110, it’s understandable that HyperX might cut some corners. That said, it’s at a weird price point—too expensive to be truly entry-level, but not expensive enough to compete with its premium-priced (and premium-featured) peers.

But hey, new switches, right? HyperX currently produces two custom switches, with a third to follow. As I write this, you can buy the Alloy Origins with HyperX Red and HyperX Aqua switches. The first is pretty self-explanatory, almost an exact duplicate of the standard Cherry MX Red. The difference is one of millimeters, with the Cherry Red’s 4mm travel and 2mm actuation replaced by HyperX’s 3.8mm travel and 1.8mm actuation. Resistance, or the force you need to depress a key, is steady at 45g.

You might expect HyperX Aquas, then, to be a duplicate of the clicky Cherry MX Blues. Wrong. In fact, HyperX’s third (still-to-be-released) switch is a HyperX Blue, which is intended to replace the vaunted MX Blues.

The Aquas, oddly enough, are meant to fill the Cherry MX Brown slot. Maybe brown just isn’t sexy enough for HyperX? In any case, this is HyperX’s “tactile” switch, meaning there’s a slight bump in the mechanism that signifies actuation. Again, HyperX moved Aquas from Cherry’s 4mm travel and 2mm actuation down to 3.8mm travel and 1.8mm actuation, at 45g of force.

Differences on paper rarely convey the actual differences between switches though. For instance, Gateron Reds and Cherry MX Reds are identical on paper, but nevertheless some users swear by the “smoother” feel of Gateron’s version.

I’d honestly argue the same for HyperX Aquas, after a few days of use. The tactile bump seems far less prevalent than it does on Cherry MX Browns—and not necessarily in a bad way. I still prefer the click and clack of a Blue switch (MX or otherwise), but the HyperX Aquas are eminently smooth and quiet, while still providing more feedback than a linear Red. That makes them more pleasant to type on, day to day.

HyperX also changed the switch housing, which is interesting. Cherry’s RGB switches (and Kailh’s, and Gateron’s, and so forth) embed the LED under a layer of translucent plastic. The LED is mounted above the central stem, but this translucent plastic helps refract light to all sides of the switch. Those who don’t mirror Cherry’s design typically expose the LED but house the rest of the switch in opaque plastic. This provides cleaner backlighting for the keyboard lettering, but cuts down on the amount of ambient light refracted on the sides—and thus cuts down on that “Ooooh, an RGB keyboard” effect that most manufacturers desire.

HyperX has created a strange hybrid. The LED is isolated under translucent plastic, but the rest of the switch is made from transparent plastic, perhaps to allow more light to be refracted to the sides and the bottom of the keyboard. Does it make a huge difference compared to using uniformly translucent plastic? Not really. The lighting does seem slightly brighter and crisper though, which is especially important if you want to swap the stock ABS keycaps for denser PBT.

Speaking of which, HyperX sent over some of its add-on peripherals to test out with the Alloy Origins. Specifically, we received its updated Pudding Keycaps and the HyperX Wrist Rest. No really, that’s the name. Just HyperX Wrist Rest.

I wish you could simply buy the Alloy Origins with PBT already installed (like you can with the Alloy FPS RGB), but 10 to 15 minutes with a keycap puller will get the job done. And HyperX’s Pudding Keycaps are fairly attractive, if you like that style—translucent sides, solid top, and translucent lettering. PBT doesn’t allow as much light through as ABS, but HyperX’s innovative switch design helps offset that problem, as I said. And PBT is both more durable and less prone to that “shiny” look that ABS plastic develops after extended use.

My only real complaint is that HyperX’s number row continues to look cramped. I don’t know why, as other companies manage to cram both primary and secondary functions side-by-side without issue. Something about the typeface or the kerning looks weird on HyperX’s keys though, both stock ABS and PBT.

HyperX’s PBT caps also leave off the media controls and other specialized secondary functions found on the Alloy Origins’s default keycaps, which can be annoying if you don’t have them memorized. Just one more reason why the Alloy Origins would be better with dedicated media keys. Still, they’re $5 cheaper than Razer’s PBT option and let a lot more light through, given the translucent sidewalls.

The HyperX Wrist Rest ($20)Remove non-product link isn’t bad either, though the fact it’s not a pack-in makes it less attractive obviously. It’s pretty easy to buy any of a thousand wrist rests on Amazon for the same list price (or less). But it’s a well-built and plush fabric wrist rest, and the red stitching around the outer edge is a nice touch, so long as it matches the rest of your build. I could do without the HyperX branding, but hey, at least it’s subtle.

Anyway, we won’t factor the PBT keycaps and wrist rest into our score for the Alloy Origins. Suffice it to say, if you’re going to buy one of HyperX’s keyboards—or even a competitor’s board—the PBT keycaps are a solid upgrade. Like I said, it’s hard to find PBT keycaps this cheap, especially ones that are RGB-ready. The wrist rest is decent as well, though you can do better for less.

And the Alloy Origins? I don’t know how many more Cherry MX-style switches the world needs, but the HyperX Aqua is a solid addition to a crowded field. I think I prefer them to Cherry MX Browns even—though I was never much of an MX Brown fan to begin with. The Alloy Origins doesn’t do much that the Alloy FPS RGB didn’t already do, but if you’re looking for a basic mechanical keyboard at a decent price, HyperX is fast establishing itself as one of the main contenders.