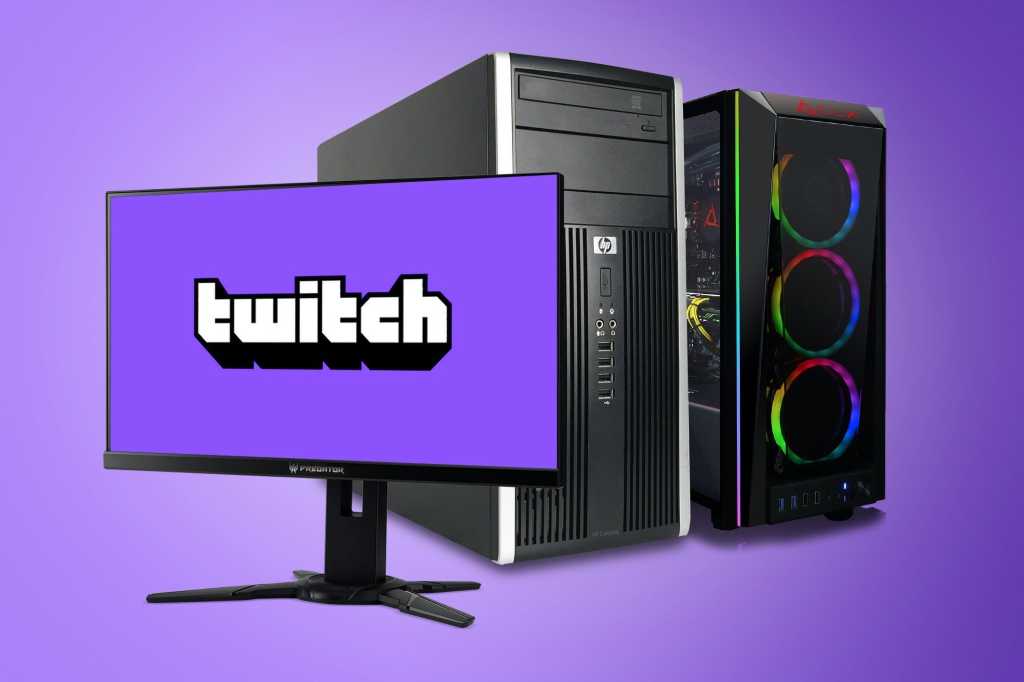 It seems just about everyone is streaming to Twitch or YouTube these days. But getting started doesn’t require a single brand-new, extremely powerful desktop. You can instead split the work between two computers—one handles gaming, while the other outputs the stream.

That means for those on a budget, you can conscript humbler PCs into service, allowing you to get extra life out of an older system when you replace it. On the high-end, you can intensely optimize each computer for gaming versus content creation.

Regardless of how much cash you can drop on internet fame, this guide will explain how to get up and running.

The primary purpose of this PC is to encode your gameplay, voice-over commentary, and webcam feed, then push them out to your streaming platform of choice. This task can be done in one of two ways: Software-based encoding leans on your processor (CPU), while hardware-based encoding puts your graphics card or even a CPU’s integrated graphics (if available) to work.

CPU encoding is slower and greatly stresses older chips with fewer cores, but some people believe its quality is higher. GPU encoding, on the other hand, utilizes the built-in encoders on the hardware—which is why integrated graphics can step up to the plate—and is much faster. What you find to be the better option depends largely on how your streaming PC is configured, and what streaming software you use.

No matter which style of encoding you choose, aim for no more than 80 percent CPU utilization, and 85 to 90 percent for the GPU. You want to leave some room for the system to process other tasks at the same time, like watching chat or leaving a web browser open in the background. If you plan to record the stream locally, leave even more resources free—our rule of thumb is to allocate equal amounts to the stream and the recording if you want them to match in quality. You can adjust from there based on your preferences.

Ideally, this computer’s specs will allow you to comfortably play your games at 60 frames per second (fps) in the maximum resolution you plan to stream. Most people consider the standard to be 1080p/60fps, with Twitch and other streaming platforms like Mixer capping out at such settings. Only YouTube supports higher resolutions, allowing both 1440p and 4K as options.

However, the quality of your stream is also influenced by bitrate settings—the amount of data per second that your stream’s allowed to use—so don’t feel that you must have a hulking, beefy system. A fair number of U.S. households have low upload speeds, which can’t really support streaming at 1080p/60fps. (The video will look blocky and choppy, especially in games with a lot of fast movement.) Streaming at 720p/60fps will look better, meaning your hardware doesn’t have to be insane or new.

(See the “Internet connection” section below for more details about bitrates settings.)

You need a capture device to grab the game footage coming from your gaming PC. Either an external model or an internal PCIe card will do.

We recommend devices from gaming-focused companies like Elgato and AverMedia, as they’re built for this kind of purpose. (No need to get professional-grade hardware from Blackmagic, Magewell, or Teradek; that’s overkill and thus unnecessarily expensive.)

If you use a DSLR or GoPro as your webcam, you’ll have to add on a second capture device. We recommend looking at gear that specializes in picking up camera input, like Elgato’s Cam Link 4K.

You need at least one for routing your gaming PC’s feed to the streaming PC’s capture device, plus another if you’re using a DSLR as your webcam. For reliability, we suggest using a thicker, more sturdy cable, like this variety from Monoprice, but it doesn’t need to be expensive. Ignore any marketing hoopla around gold plating, which makes no difference for digital signals.

A microphone is a highly important part of a streaming setup. People expect to hear a streamer during a broadcast—reacting to the gameplay, chatting about whatever topic’s on their mind, or answering stream questions. While regular streamers often use a dedicated USB or XLR microphone, you can start with a headset or even earbuds with a built-in mic. (See our roundup of best PC gaming headsets for some suggestions.)

If you do spring for a dedicated USB or XLR microphone (like the ultra-popular Blue Yeti), we recommend a stand that suspends it over your desk, in order to prevent vibrations from the table from getting picked up. Banging away at a keyboard can get pretty loud for those listening in.

Most streamers use headphones or a headset during broadcasts. If you run game audio through speakers, your microphone could pick up the sound and transmit it over the stream, creating an echo effect. Over-the-ear headphones are the most popular, since having something in or directly on your ears for long hours can become uncomfortable.

Should you wish to play with friends while streaming, you may want a headset (headphones with a mic) instead of just headphones. With a second mic in the mix, you have the option of a two-microphone setup that will transmit your voice more cleanly to the stream, while still allowing you to communicate with your party. Our setup instructions cover both single mic and double mic configurations.

You can plug both your gaming and your streaming PC into a single monitor and switch between inputs, but doing so can become tedious while going through the setup process or managing a stream. A second panel makes life much easier: You can play your game on your main monitor, and have stream and chat available at a glance in the other screen.

Alternatively, you can purchase a keyboard-video-mouse (KVM) switch, which allows two computers to share a single monitor, mouse, and keyboard. A KVM switch isn’t as convenient as having two monitors, but it saves on space and reduces the mice and keyboards you need to just one set.

Even basic streams require interaction with the streaming PC—like muting a mic, changing scenes, or even stopping the broadcast. While you can do that with your mouse and keyboard, many streamers use devices with programmable macro keys (which we’re informally calling a stream controller) to do so quickly. You get a board with big buttons that can be tied to a specific action, letting you manage your stream without having to divert your attention.

The most popular models come from Elgato, which sells the highly regarded Stream Deck and Stream Deck Mini. Software alternatives exist as well (like Stream Deck Mobile and Touch Portal), but the trade-off is that you won’t be able to go by feel to press the onscreen buttons.

Once your hardware is set up (instructions below), you need to install and configure streaming software in order to broadcast to Twitch or YouTube. Most also support local recording, if you seek that feature as well.

The most popular free programs include Open Broadcaster Software Studio (OBS), Streamlabs OBS, and Xsplit. (Note that Xsplit charges for access to some features.) Nvidia Shadowplay and Elgato Game Capture HD are also popular options if you own the relevant hardware.

The ease of use varies among these applications, with Streamlabs, Shadowplay, and Game Capture HD more user-friendly, and OBS Studio the most complicated—but also feature-packed and thus commonly used. If you find OBS too overwhelming at first, Streamlabs (which is based on OBS) is a good middle ground.

You can string together audio on a dual-PC setup so that you hear the game and the stream hears you (including any group conversations you’re having) in a number of ways. For the method we chose, you’ll need Voicemeeter Banana, a free virtual audio mixer that duplicates the gaming PC’s audio and sends it to your headset and the stream simultaneously.

When playing with a group of people, you’ll want to be able to hear them—and so will your viewers. A voice call conducted over one of many free programs lets you transmit that good-natured smack talk.

Currently, Discord is the flavor of the month, but Skype, Hangouts, Ventrilo, and even Xbox Live (via the Xbox Console Companion app on Windows 10) are all reliable alternatives.

Whether to check on your broadcast after going live, to monitor the stream’s chat, or even to look up random facts, you’ll need a web browser installed on your streaming PC. (Don’t do it on the gaming PC—everything on that computer’s screen could get mirrored to the stream, depending on your configuration.)

Note: Be sure to configure your streaming software so that your streaming PC’s audio is muted. Loading your broadcast in a browser tab will feed that audio back into the stream, causing a hideous looped, echo-chamber effect.

Obviously, you already have an internet connection, but the important factor is your upload speed. Most home internet providers only advertise download speed, and it’s usually not symmetrical with upload speed—if you don’t know it, run a speed test at several different times to get the average, or call your ISP and ask.

Generally, you need an upload speed between 3Mbps and 6Mbps for broadcasting at 720p, and between 6Mbps and 10Mbps for 1080p. That puts a cap on the quality of your stream as much as your gaming PC does, especially because you can’t max out the bitrate for your stream to match your upload speed. Fully saturating your upload bandwidth affects your experience on the download side of things—your system still sends packets of data to servers as part of loading webpages, for example. You’ll need to save some bandwidth for monitoring chat, looking up things on websites, etc, during your stream.

For example, if you’re limited to a 5Mbps connection, you’ll need to choose a bitrate (the amount of data to transmit per second) between 2,500Kbps (2.5Mbps) and 4,000Kbps (4Mbps) to avoid oversaturating your connection. That’s just enough to meet the recommended specs for 720p streams. For 1080p, the major platforms recommend a minimum bitrate of 4,500 for 30fps and 6,000 for 60fps; preferred bitrates land around 6,000 and 8,000, respectively.

Of course nothing’s stopping you from streaming at higher resolutions on a slower connection. It just won’t look good despite how crisp and smooth your computers are handling the game and the stream encoding. That’s particularly the case if you’re playing a game that involves fast-paced movement (think battle royale or first-person shooter games).

How to set up your dual PCs

Connecting the hardware goes quite fast—we’ve made a diagram and outlined the steps below to help you zoom through the process.

Installing the software is about as fast as setting up the hardware—we’ve outlined which program goes on which computer below, plus how to use the virtual voice mixer so your mic transmits properly to your stream.

For how to configure your streaming software, you can read our guide on how to stream PC games on Twitch for the basic concepts. You should still get a general idea of the common elements in setting up a stream, even if you’re not using OBS like we did.

First we’ll adjust this PC’s display settings so that your gameplay gets seen by the game capture unit. Start by right-clicking on your desktop and choosing Display Settings.

Now whatever’s shown on your actual monitor will be mirrored to the stream. Let’s move on to set up the virtual audio mixer.

Before you start, be sure you’ve connected your headphones and microphone (or headset) to this computer.

Make sure you’ve connected your headset to this computer before starting. Also confirm that you’ve hooked up your dedicated microphone to your streaming PC, too.